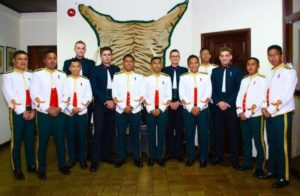 On Friday 25 November the 1 RGR Officers’ Mess hosted a dinner night for the Officers of the 3rd Battalion, Royal Brunei Land Forces (RBLF).

The 3rd Battalion are an Infantry Battalion based at Lumut, approximately 20 minutes drive from Tuker Lines, and have become great partners of the Garrison.

Most of 1RGR will have been on at least one joint exercise with Officers and Other Ranks from the 3rd Battalion and Support Company have recently delivered joint training to their opposite numbers. Last year the 3rd Battalion joined 1 RGR for their G200 Parade in Bandar Seri Begawan.

The dinner night was an opportunity for Officers of the Garrison to meet and get to know their counterparts in RBLF, and to cement and celebrate the strong ties which 1 RGR have developed throughout their last three years in Brunei.

22 RBLF Officers attended and were hosted throughout the evening by a good turnout of RGR and Garrison Officers’. The vast majority of 3rd  Battalion Officers are practicing Muslims and so the menu was halal. While this still allowed for an excellent bhat, alcohol is considered haram (forbidden) under Brunei’s Sharia Law, and the dinner night was probably one of the very few completely dry evenings in the Officers’ Mess for some time! 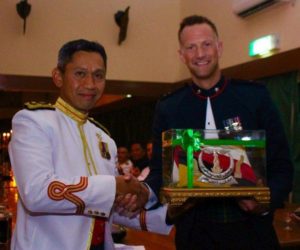 Presentations at the Dinner

Entertainment for the evening was provided by the Combined Pipes and Drums of 1 RGR and the 3rd Battalion who played an Inner and Full Band Set. The two bands have practiced and performed together many times over the last few years and their music was, as always, excellent.

The dinner was concluded with a short speech by Lieutenant Colonel Charlie Crowe, Commanding Officer 1 RGR where he thanked the Bruneians for their attendance and continued partnership, and a return from Lieutenant Colonel Shannonizam, Commanding Officer 3rd Battalion. He the historical ties between the Gurkhas and the RBLF and the continued importance of such a relationship today, before presenting the Officers’ Mess with a RBLF pipe banner. In exchange the 3rd Battalion were presented with an RGR pipe banner bearing the arms of the 3rd Battalion, a fitting and overt symbol of the close relationship between the two units. 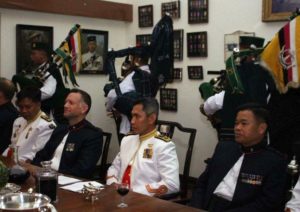 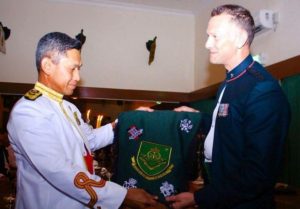