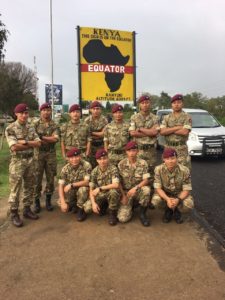 Elements from Support Company and C Company are also in location to provide support as permanent range team and observer mentors to the Battle Group.

The soldiers flew to Kenya at different times and some had an opportunity to join an adventure training package before undertaking the role they have been deployed to deliver, acting as enemy forces for the Battle group.

They are due to finish their exercise at the end of November 2017 and will be back in the UK in time for Christmas. This exercise will provide a learning opportunity for those who will be deploying on Exercise ASKARI STORM in February next year.

FOLLOW US
The First Battalion, The Royal Gurkha Rifles bid a

The Brigade of Gurkhas Drill Instructors course re

Gurkha Company (Sittang) based at the Royal Milita

Our Second Battalion, The Royal Gurkha Rifles are

The Hill Boys band from the Band of the Brigade of