The constant demand for high performance and flexibility is something that the whole of 1 Royal Gurkha Rifles (1 RGR) has become very accustomed to over recent years. This becomes even more important with the move to the Air Manoeuvre Battle Group (AMBG), a job that requires us to be ready for almost any eventuality. The latest requirement of the AMBG was to be Public Order trained up to Company level, so that we are properly prepared in case of a contingency deployment to the Balkans. 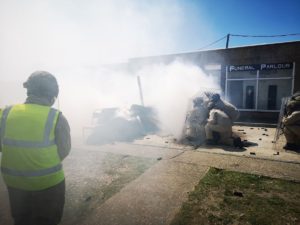 To ensure complete competency, Sergeant Deep Nursing Gurung and his team delivered a four-day training package to bring all novices up to the basic standard required for any future deployment. The first phase of the exercise encompassed lessons on the kit itself, procedure of use and how it could be employed. The complexity continued to build over the duration of the week and culminated in a Battlefield exercise where B and C Companys clashed in a series of intense rioting scenarios. B Company taking the lead initially as troops under training (TUT) whilst C Company player the role of Civilian Population before swapping to play the other. This exercise validated B and C Company for Collective Training (CT) 0-1 and set the conditions for continuation training and subsequent validation from Mission Training and Mobilisation Centre for CT 2. 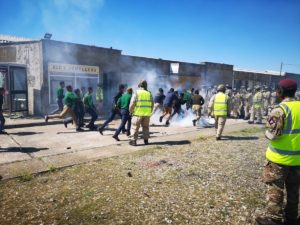 After a one-week break, it was time to deploy again to Lydd Training Area for the CT 2 validation exercise. This time 4 Platoon Commander, Lieutenant JJ Hogg ran the exercise which followed a similar format to the previous. First, delivering Company level training before moving into battle exercises whereby Officer Commanding (OC) B and OC C manoeuvred their respective Companys to achieve the required intent.

Come the validations days both Companys were again locked horns and engaged in some extremely intense public order scenarios, be it to CLEAR, HOLD, CONTAIN, WITHDRAW, SEPARATE or to DISPERSE. It was evident that each company took the upmost pleasure in ensuring that the opposing force found it as challenging as possible, be it through some fairly over engineered barricades, heavy resistance to the shields or through a concoction of foot-powder and water in order to obscure the TUTs vision.

As a young platoon commander, I had seen the professionalism, diligence and adaptability of soldiers on Operation TORAL 7, but have yet to have seen much of the Intake 18. Public order training forces even the most junior rifleman to think, understand and act on the threat to their front without any formal direction.