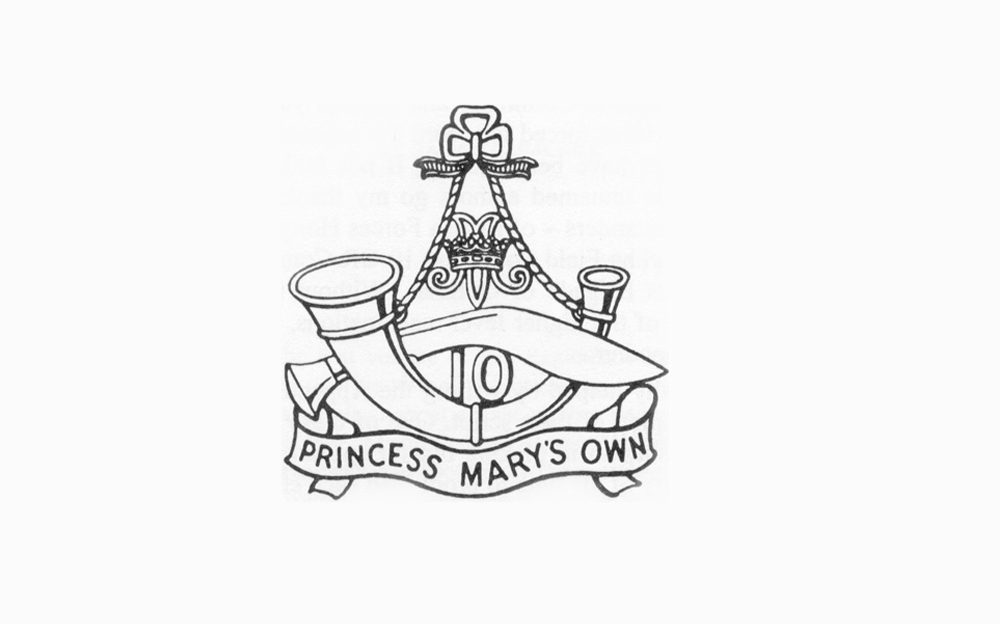 The 10th Princess Mary’s Own Gurkha Rifles (abbreviated to 10 GR), was originally an infantry regiment of the British Indian Army. Over the years the regiment has had several changes of designation and composition, and traces its ancestry, battle honours and its number back to the 10th Madras Infantry, raised in 1766.

The regiment first recruited Gurkhas in 1890 and campaigned in Burma before fighting in the First World War, the Third Anglo-Afghan War and the Second World War. Following India’s independence in 1947, it was one of four Gurkha regiments transferred to the British Army.

From 1948 to 1960 it was very active in the Malayan Emergency and in 1963-66 in Indonesian Confrontation. It was amalgamated with the other three British Gurkha regiments to form the Royal Gurkha Rifles in 1994.

10th Princess Mary’s Own Gurkha Rifles is one of the four infantry regiments which in 1994 were amalgamated to form the Royal Gurkha Rifles. The latter maintains a record of Gurkha service to the British Crown that dates back to 1815, yet the history of 10th PMO Gurkha Rifles goes back even further than that. It was raised in 1766 at Vellore in south India by Colonel Donald Campbell of Glensaddell as the 14th Battalion of Coast Sepoys, part of the Honourable East India Company’s Madras Army. Conversion to a Gurkha unit came in 1890, and in 1948, after Indian Independence, the Regiment became part of the British Army proper. It carried the number Tenth from 1770 to 1994.

In the pre-1890 period as a Madras unit the Indian officers and men were a mixture, in varying proportions, of Hindus of all castes and Muslims, with a few Indian Christians. The Tenth recruited its men partly from wherever it was stationed, partly from the central Carnatic region around Vellore, and partly from among the sons of the soldiers and Indian officers. The sons were hardened to army life, as all the Madras sepoys’ families lived with the Regiment and in the 18th century even went on campaign.

The 10th Madras Infantry served in south and central India and in Burma, fighting the French and Dutch as well as the formidable Marathas and the Mysorean armies of Haidar Ali and Tipu Sultan, and many other indigenous opponents. In 1767, only a year after it was raised, under Captain Matthias Calvert the Regiment became the first British sepoy unit to achieve a major success on its own: for its stubborn and strategically vital defence of the fort of Amboor against immense odds it was immediately awarded new colours bearing the word AMBOOR and the badge of a Rock Fort. This constituted the first battle honour or honorary distinction ever granted to any unit of the British Indian armies, and when the honour ASSAYE and the badge of an Elephant were added in 1803 the Regiment is believed to have become the first in the British Indian Armies to carry honours for two battles. At Assaye the then 1st Battalion 10th Madras Infantry was the first sepoy unit to clash with the enemy, and with the 78th Highlanders on their left they smashed through a mile-long line of Maratha infantry and cannon. In later life the British commander, the 1st Duke of Wellington, considered Assaye his finest victory.

In 1890 the Regiment was ‘localised’ for permanent service in Burma, and at the same time the Madrassi officers and men were replaced by Gurkhas and Assamese. As soon as enough Gurkhas were available, in 1895, the Regiment became an entirely Gurkha one, as reflected in its title; but it retained proudly the number Tenth, also the Battle Honours, Honorary Badges, Mess and Band funds and not least a sacred image called the Mahabir Swami stone, depicting Hanuman the Monkey God. This has been revered in the Mandir (temple) ever since and gave rise to 1/10th Gurkha Rifles’ battle cry ‘Hanuman!’ in Burma in WW2. The pre-1890 Honours were carried until 1903 and resumed by permission of Her Majesty the Queen in 1989. The combined badge of an Elephant and Rock Fort was revived and worn on the arm in 1990.

From the outset in 1890 the Regiment chose to recruit Gurkhas from East Nepal, principally from the Rai and Limbu jats, with smaller numbers of Sunwars and Tamangs. The men soon proved themselves of the highest quality as soldiers, adding extra renown to the Gurkha name through their disciplined aggression in attack and tenacity in defence. During the 104 years as a Gurkha unit after 1890 the Regiment far surpassed its earlier achievements, serving in peace or war in Aden, Belize, Borneo, Brunei, Burma, Cambodia, Cyprus, Egypt, French Indo-China (Vietnam), Gallipoli (Turkey), Hong Kong, India, Iraq, Italy, Java, Lebanon, Malaya, Palestine, Persia (Iran), Singapore, Syria, and the United Kingdom. In the First World War the 2nd Battalion served with immense gallantry and fortitude at Gallipoli from June to December 1915, on the Helles, Anzac and Suvla fronts, suffering huge casualties in the Battles of Gully Ravine and Sari Bair, also in the great blizzard in November and at sea in the sinking of the troopship Ramazan in September. The 1st Battalion then took a full part in the final defeat of the Turkish Ottoman Empire in Mesopotamia (now Iraq), culminating in the crushing victory at Sharqat in October 1918.

In the Second World War the 1st, 3rd and 4th Battalions of the Regiment served against the Japanese in Burma from the long retreat of 1942, through the epic battles around Imphal (where all three were heavily engaged), and in the final advance southwards to Rangoon. Particular successes came at the Tuitum Ridge (1/10th), the Shenam Pass (3/10th) and the Irrawaddy Bridgehead (4/10th). In the final stages and aftermath of the War 3/10th served in Malaya and Java, and 4/10th in French Indo-China (Vietnam) and Cambodia. Meanwhile the 2nd Battalion served in the Middle East and then in 1944–45 fought in north-eastern Italy against the Germans, first in the great set-piece attacks near Rimini which broke the enemy’s Gothic Line and then in the advance northwards across a series of fortified rivers until Victory in Europe Day in May 1945. In WW2 the regiment’s record in terms of time spent in action and the number of gallantry awards won was second to none in the Indian Army and in 1950 it was awarded the title Princess Mary’s Own. After the War it further enhanced its name in the Malayan Emergency from the very beginning in 1948 to the end in 1960, leading the field in tactical innovation and operational successes, and then also in Borneo Confrontation in 1963-66. Near Serikin in Borneo on 21st November 1965 Lance-Corporal Rambahadur Limbu won the Victoria Cross.

Throughout its history the Tenth has lived up to the saying that ‘the Regiment is for service and not for show’.