Colonel Tony Streather has died aged 92. Born on 24th March 1926, he died on 31st October 2018. He was a mountaineer who learnt his trade as a soldier on the Northwest Frontier and became a leading light in the 1950s golden age of Himalayan mountaineering, getting close to the summit of K2 and making first ascents of both Tirich Mir and the world’s third-highest mountain, Kanchenjunga. He was the first person to climb two peaks higher than 25,000 ft. 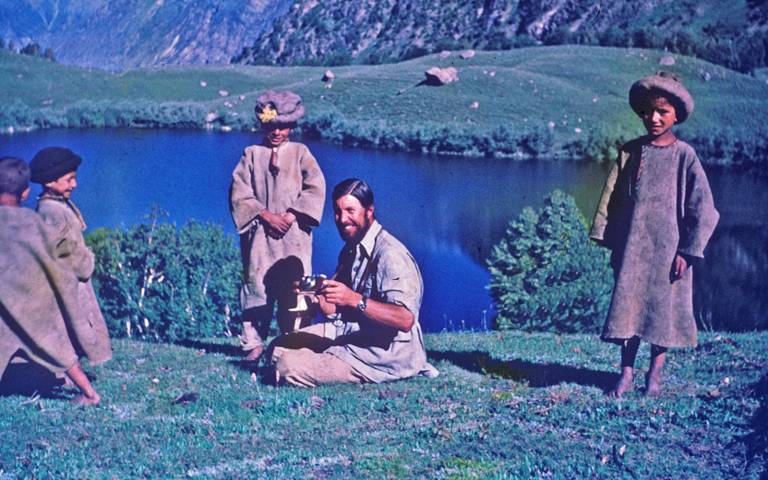 The middle of three children, Harold Reginald Antony Streather was born in Golders Green on March 24 1926 to Gertrude and Reginald Streather, a builder. He was educated at University College School, Hampstead. Inspired by a talk he had heard about the Indian Army, in 1945 he took a commission in the 1st Battalion Rajputana Rifles, based in Baluchistan.

After Partition in 1947 he served under a Pakistani commanding officer in the Chitral Scouts, taking responsibility for 1,000 men, 183 horses and 50 camels. It was on patrol – crossing the high passes of the Hindu Kush, often under threat of ambush – that he learnt his mountaineering.

In 1950, when Arne Naess’s Norwegian expedition arrived in Pakistan to attempt the unclimbed Tirich Mir, Streather was enrolled as transport officer. Fluent in Pushtu and Urdu, he was an invaluable liaison with the local porters. Like them, he usually trekked in “chaplis” – stout-soled sandals with scraps of goatskin wrapped round them for venturing above the snowline – but the Norwegians persuaded him to don climbing boots for the final push to the 25,518 ft (7,778 metres) summit.

Success on Tirich Mir – at that time one of the highest summits yet climbed – made Streather an obvious choice for the 1953 Everest expedition, but he was turned down on the grounds of insufficient experience. Nevertheless, a few weeks later he was invited to join an American attempt on the much harder K2.

Recalling the expedition 50 years later, Streather remarked: “I think when they first met me in Rawalpindi, the Americans were expecting a relic of the old Raj who had spent his time beating the natives. They couldn’t believe it when the natives seemed to get on so well with me.”

Once again, his official role was liaison and transport officer but, as the leader, Charles Houston, put it, “he just carried on up the mountain with us”. Contrary to the practice in many modern expeditions, the eight men used no supplementary oxygen and virtually no fixed ropes. After six weeks they were close to the unclimbed summit, but at Camp 8, almost 26,200 ft (8,000 metres) above sea level, they were hit by one of K2’s notorious storms, and were stuck in their tents for six days.

Art Gilkey collapsed with a blood clot in his leg, which moved to his lungs. Despite Gilkey’s predicament, and the still unsettled weather, Houston decided that the team would try to get him off the mountain, trussed up in a sleeping bag and tent.

They made a valiant attempt, and at the end of one gruelling day had almost dragged him down to Camp 7, when one man slipped, dragging the rest with him, before Pete Schoening saved the whole team with a brilliant ice-axe arrest. However, shortly after that, an avalanche swept Gilkey away in his improvised stretcher.

Even without the burden of a paralysed man, it took them another five days to get down the mountain. Decades later, Houston said that if the avalanche had not taken Gilkey they would probably all have died, but he remained adamant that it was unthinkable to abandon a team-mate while he was still alive.

Streather returned to the subcontinent in 1955 to attempt the world’s third-highest peak, Kanchenjunga, on the Nepal-Sikkim border. The expedition was led by the genial surgeon, Charles Evans, who had so nearly reached the top of Everest in 1953. Unlike Everest, Kangchenjunga was virtually unknown and the expedition was billed as a “reconnaissance”, but the reconnaissance was so successful that four people reached a point just a few feet below the highest snow pinnacle, stopping there out of deference to local religious belief. The first pair, George Band and Joe Brown, had a momentous summit day, with Brown turning his oxygen up to six litres per minute to climb a steep crack up a rock outcrop more than 8,500 metres above sea level.

Late that evening Brown and Band returned triumphantly to the top camp, to find Streather and the New Zealander Norman Hardie waiting their turn at the summit. According to Streather, Brown looked at him pityingly and joked: “No chance, Tony – you’re a hopeless rock climber.” So it gave Streather and Hardie great pleasure the next day to find an easy snow gully round the side of the rock outcrop leading gently to the summit.

Having served with the Gloucestershire Regiment in Korea, Streather was an instructor at Sandhurst. After a lecture in 1957 to the Oxford University Mountaineering Club, he was asked to lead a student expedition to the unclimbed peak of Haramosh, in the Karakoram.

He had only recently married and the couple had a young baby. “It was probably very irresponsible of me to go,” he said later, “but it was very tempting to return to Pakistan and see old friends.”

The Haramosh expedition culminated in tragedy, subsequently recorded in Ralph Barker’s harrowing book, The Last Blue Mountain. In a complex sequence of events at around 6,500 metres, two of the students, Bernard Jillott and John Emery, were swept 300 metres over an ice cliff by an avalanche. They came to rest in a snow basin above an immense precipice, alive but badly shocked, and minus their essential ice axes.

More than 24 hours had elapsed by the time Streather and a third student, Rae Culbert, managed to climb down to them with food and a stove. Streather tried to lead the team back up to the ridge but, exhausted and short of proper gear, they kept sliding back down into the basin, where they spent another night in the open.

The next day Jillott and Emery managed to climb out, but Streather was pulled back down by Culbert. After the third night, Culbert was too weak to move. Streather had lost his ice axe and had to climb out on his own, using a frozen mitten to scoop snow out of the holds he had cut in the ice two days earlier.

“I thought I was dead and I didn’t know why I was climbing, but I just knew I had to keep moving, for Sue and the baby,” he recalled. “I had this incredible feeling that someone was helping me, pulling me out of a well.” He later confided to a friend that had he not had a wife and child he would have remained to die with Culbert.

At Camp 4 he found Emery waiting, barely alive. Jillott had taken a wrong turn and fallen over the other side of the ridge to his death. Even after a night’s sleep, Streather and Emery barely had the strength to stand up, let alone return for Culbert, who by now had probably died anyway.

As on K2, four years earlier, Streather was moved to tears by the compassion of the Hunza porters who came up from base camp to meet the half-dead survivors tottering down the mountain. Back in Britain, he was hurt that Jillott’s family would not speak to him. However, Rae Culbert’s younger brother, Bill, remained in touch for the rest of Streather’s life, convinced that the older leader had done everything possible to try to save the young student: “There was nothing more he could do.”

Streather’s subsequent career included service with the Glosters in Cyprus, with the Queen Elizabeth’s Own Gurkha Rifles in the jungles of Borneo, and as their commander in Berlin. He served as Alpine Club President and was leader of the 1976 British-Nepalese Army Expedition. As befitting the last British officer to serve on the Northwest Frontier, he was a keen polo player and loved hunting.

He retired from the Army in 1977 and took up the post of Sport and Estates Officer at Sandhurst for 10 years. He was always generous in his encouragement of younger soldiers and climbers, and was admired for his modesty and old-fashioned courtesy. He was appointed OBE (Military) in 1976.

Tony Streather married, in 1956, Sue Huggan, who predeceased him. He is survived by three sons and a daughter.

Obligatory taken from the Telegraph.