Queen’s Birthday Honours include members of the Brigade of Gurkhas.

Lieutenant Colonel Timothy Robert Blackmore from The Royal Logistics Corps, former CO of QOGLR, was awarded The Most Excellent Order of the British Empire as an Officer. He served with the QOGLR for almost 3 years in 10 Tpt QOGLR based in Aldershot.

Most Excellent Order of the British Empire (as an Officer) –

BFBS has announced the fixture list for the 2014 Nepal and Kathmandu Cups to be played during Brigade week in July. The Nepal cup is the premier sporting event of the season featuring eight football teams including 1 and 2  RGR, QGS, QOGLR, GWM, GSPS, and QGE. The Kathmandu cup meanwhile will feature retired Gurkhas representing their former units in a similar fashion.

On 14 Jun around 250 Military Personnel, including  Gurkha Company (Sittang) and the Band of the Brigade  of Gurkhas, marched through the town of Camberley to celebrate the Freedom of the Borough and to commemorate the 100th anniversary of World War 1. Thousands of supportive public turned out to line the streets of Camberley. The historic parade began from the RMA entrance on the London Road and halted opposite the Surrey Heath Borough Council Office. The parade presented arms followed by an inspection from the Mayor of Surrey Heath Borough Council. Freedom of the Borough symbolises the highest honour that has cemented the historic relationship between Camberley, Surrey Heath and the Royal Military Academy. Cheering crowds, marching cadets and Gurkha Company Sittang were entertained by the Band of the Brigade of Gurkhas. 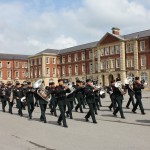 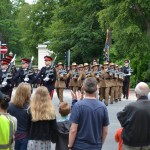 1.     Tickets Purchase.  With only 3 weeks remaining before the GBA Bhela, please apply direct to your Unit Bhela Representative or through your Regimental Association Honorary Secretary for your Bhela Curry Lunch ticket for the GBA Bhela,  Kathmandu and Nepal Cup football matches that will take place on Friday 11 July 2014.  To encourage early sales, tickets sold before 27 June 14 will be at £7.50.  Tickets sold after the 27th June and on the day itself, will be sold at £10 per ticket.

2.     Outline Programme.  The outline programme is as follows:

d.     Soft drinks can be purchased at all outlets.

You will be aware that Tranche 4 of the Army Redundancy Programme was announced today. This is a sad occasion and means all eligible personnel in the Brigade of Gurkhas (BG) will have been notified of the outcome of the redundancy selection boards through their Notifying Officers.

We have all known for sometime, since the Strategic Defence and Security Review (SDSR) in late 2010, that the Army was to reduce in size to approx 82000 by 1 Apr 15 through a combination of redundancy, normal manning controls and natural wastage. The cuts in our strength have not been unexpected and the Brigade fully understands that it must be part of the Army downsizing and the planned redundancy programme as we were over strength against our establishment. The reality is no matter how painful these reductions are, they are essential for the continued efficiency of the BG in order to prepare it for a place in the future Army ORBAT as a steady and manned organisation in manning balance.

Redundancy is never an easy issue, and many soldiers in the Brigade will be rightly concerned because they are being made redundant. However, I want to reassure you that HQBG will lead on all policy and support aspects of Gurkha redundancy within the BG. If you are selected, help us to help you take charge of your own future to get the best possible solution for you as an individual and for your family. So far 680 soldiers have been made redundant in Tranches 1, 2 and 3. Indeed, those who have left already and decided to stay in the UK have been most successful in establishing themselves and finding employment so there is much ‘best practice’ to follow. Be positive, be proud of your service and use it your advantage in your future careers. You are a Gurkha soldier, the best of the best. Employers recognise this and there are a number who specifically seek the special qualities that Gurkhas are famous for. What is a traumatic event, leaving the service that you enjoy, has the potential to provide you with some real opportunities for a new life beyond the Army.

Some key points on Tranche 4 redundancy:

• BG Tranche 4 Summary. Tranche 4 is the final phase of the redundancy programme, although this will be of little comfort to those of you who have been selected for redundancy. A rigorous and careful redundancy selection process has been conducted by the Director Manning (Army) and the Army Personnel Centre in Glasgow. I have witnessed the process and it has been transparent, logical and fair. A total of approximately 210 have now been selected from the BG for Tranche 4; this figure will continue to reduce as soldiers are successful in transferring to elsewhere in the Armed Forces. This is a significant reduction from the 354 announced in Jan 14. Most of our soldiers are not volunteers and will therefore have 12 months, before they leave the Army on 12 Jun 15, to apply for Indefinite leave to Remain (ILR) in the UK, conduct resettlement training and start a second career. There are 9 volunteers who will leave in Dec 14.

• Army Transfer Policy. The new Army Transfer policy is designed to maximise opportunities for personnel to transfer in support of achieving full manning of the Army 2020 structure. This policy is applicable to Gurkhas being made redundant on Tranche 4. Interested personnel are encouraged to apply to transfer trades, particularly as an alternative to terminating their service prematurely, providing a vacancy exists and you meet the relevant transfer criteria as laid down in the Official Army Vacancy List (OAVL). Your RCMOs have been briefed to assist you should you wish to take this opportunity. Over 800 Gurkhas have achieved transfer to elsewhere in the Armed Forces since 2007, many at the expense of being made redundant.

• The Reserves. As the Army seeks to man the Reserves to 30,000 trained soldiers through OP FORTIFY as part of Army 2020, there is most definitely a place for ex-Gurkhas in the Reserve where you will be doing a job with the same skill sets and using the experience you have developed over your service. Service with the Reserves involves a small commitment of a number of training days each year and an annual training camp with similar rates of pay, as well as a bonus for joining from the Regulars. You should contact your RCMOs who will brief you on the Offer and the commitment. You will be welcome at any Reserve unit of any cap badge at any location. It will give you an opportunity to continue to soldier and it will provide another financial income.

What happens after the announcement?

• Transition Delivery. The HQBG SO3 Transition will work closely with the chain of command, potential employers of ex-Gurkhas in the UK and the Career Transition Partnership (CTP) to ensure that opportunities are maximized as our redundees/Gurkha service leavers and their families prepare for transition to civilian life. There is a great deal of liaison going on with a large number of companies who want to employ ex-Gurkhas. We are giving them authority to liaise direct with our units. The next HQBG Employment Fair will be held at Aldershot on 11 Jul 14 specifically aimed at providing job opportunities for Tranche 4.

• Immigration/Settlement. A key step in the transition to civilian life is the
process of settlement, securing the necessary visa to remain in the UK and enjoy the full range of welfare and social benefits. Points to note:

• Status. Think about regularizing your immigration status, and that of
your family (unless they are already settled or are British Citizens) in good time, to ensure a definite chance of securing a job and access to public funds such as job seekers allowance, tax credits, child benefits etc. For any soldier that seeks to resettle to Nepal there is additional support available.

• ILR. HQBG have special arrangements with the Home Office to assist in processing settlement applications (ILR) from Gurkha redundees. All ILR applications will continue to be submitted centrally through HQBG. We will process them very quickly, send them to the Home Office and monitor their progress to ensure that they are fast-tracked. Where problems arise we will try and resolve them for you quickly. This gives Gurkhas a real chance of getting a job as they leave or shortly afterwards – which is my intent.

• Immigration Roadshows. As in previous Tranches, Army Sec and HQBG, in conjunction with the Home Office, will continue to run bespoke Immigration road-shows for Gurkha service leavers to ensure that the ILR application process and timelines are fully understood. The next round of roadshows will be held at the following locations:

Please remember that you are not alone in this journey to civilian life; your Regimental HQ and HQBG are here to help. The redundancy package being offered is a good one and there are plenty of opportunities for work for ex-Gurkha soldiers. Indeed, those who have left already and decided to stay in the UK have been very successful in establishing themselves and finding employment. An army career is never for life and all of us will have to move to a second career at some stage; it is just unfortunate that some of you now have to take this step earlier than you originally planned. I am confident that we shall be able to seek the best possible conditions of transition to civilian life for you and your families and I shall continue to keep a close watch on the overall management programme as we move closer to Jun 15.
Col BG

The Gurkhas from Shorncliffe came away from the Bulford ranges with a number of trophies despite fierce competition from 50 teams from across 3 Div.

There were total of 11 matches including individual and team shoots.  The following matches were won by 2 RGR, who were ably led by Sgt Naresh Gurung, Sgt Sanjib Rai and Sgt Jastaraj Rai: