K2 – The Tragedy and the Triumph’ 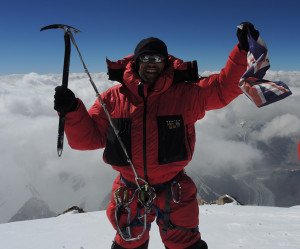 Adrian Hayes, ex 7GR, recently summited K2 on 26 July 14, last month – one year after the tragic failure of his first attempt.  Adrian is only the 8th Briton to ever summit the world’s second highest mountain and will be giving a presentation at the Royal Geographical Society on Tues 9 Sept London, 9 Sept 14, entitled ‘The Savage Mountain, which will be of interest to many.

Three young officers were welcomed to the ranks of the Brigade of Gurkhas at the Sovereign’s Parade at RMA Sandhurst today, including the Sword of Honour Recipient – Officer Cadet Barney.

The three cadets, OCdt Barney, OCdt Reeve (who won the John Peile Prize for sporting achievements), and OCdt Hunter, received their commissions and will join the ranks of 1 and 2 RGR.

The Chief of General Staff (CGS)/Col Comdt Bde of Gurkhas General Sir Peter Wall GCB CBE ADC Gen, who presided over the 175th Sovereign’s Parade, congratulated all of the cadets calling it a “proud day for the Army.”

Ocdt Reeve  said: “I’m really looking forward to posting with the brigade, and with G200 coming up it’s a very special time.”

Nearly 250 Gurkhas from 2 RGR were deployed to Glasgow for the 20th Commonwealth Games for the last two weeks of July to provide security support to the Scottish Police and the Scottish Assembly.

The Commonwealth Games security operation, called OP COMET, saw the troops from the Regiment’s A Company and Sp Company providing security for the Scottish Exhibitions and Conference Centre (SECC) – the main venue for the indoor events of the games – from 17 July to 3 Aug 14. Ensuring the safety of over 6,500 athletes and more than a million spectators has been the focus of a meticulous combined safety operation that has been years in the planning.

The security officials from 2 RGR carried out daily eight-hour long shifts to ensure that the venue was safe from any disturbances. Despite being busy trying to conduct a huge number of searches without causing undue delays to the public, some of the soldiers even had chance to take pictures with the VIPs and other celebrities when they came through the security area.  Prince Charles, Prince William, Prince Harry and the Duchess of Cambridge all visited the site to speak with the soldiers and have their photos taken.

The soldiers were rewarded with an extra bonus of free seats to witness some of the spectacular events taking place throughout the fortnight-long event.

During the Battle of Loos in France in the autumn of 1915, a battalion of the 8th Gurkhas suffered terrible casualties, hurling themselves time after time against the weight of the German defences, and in the words of the Indian Corps commander, Lieutenant-General Sir James Willcocks, “… found its Valhalla”.

At Gallipoli, the 1st/6th Gurkhas, having landed at Cape Helles, led the assault during the first major operation to take out a Turkish high point, and in doing so captured a feature that later became known as “Gurkha Bluff”. At Sari Bair they were the only troops in the whole campaign to reach and take the crest line and look down on the Turkish defences.
The first Victoria Cross awarded to a Gurkha was that won by Rifleman Kulbir Thapa for valour at the Battle of Loos in September1915. Three VCs were awarded to Gurkha Regiments during the First World War.
Nepal, at the outset of the war immediately offered and sent over 8,000 Nepalese troops to India to help her British Ally; this number rising to over 13,000 by the end of the war

2/3 Gurkha Rifles in France during WW1 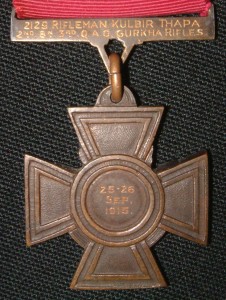