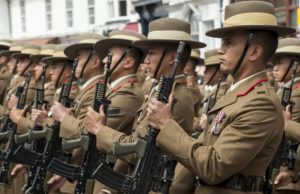 A total of 41 Gurkhas from the Infantry Battle School (IBS) have taken part in the 32nd Annual Gurkha Brecon Freedom Parade.

The Soldiers are all based at the Gurkha Wing (Mandalay) of the IBS. There was also musical support from Band of the Brigade of the Gurkhas and two pipers from the 1st Battalion Royal Gurkha Rifles (1RGR).The parade commander was Captain Giriprasad Gurung, the Senior Gurkha Officer in the Infantry Battle School. 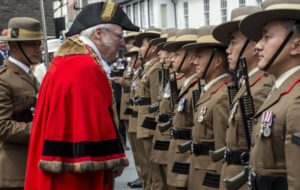 The Mayor of Brecon, Councillor Leual Williams Inspected the Parade, along with The Lord Lieutenant of Powys, Nepalese ambassador, Colonel of the Brigade of the Gurkhas and the Commanding Officer from IBS.

The parade has been a key annual Gurkha event at Brecon since 1980s. A cultural show presented by the Gurkha Wing (Mandalay) and the Band of the Brigade of Gurkhas on the day has been admired by locals since the inception of the parade. This event provides an excellent opportunity to engage and maintain our close and strong relation with the local community and retired Gurkha community. 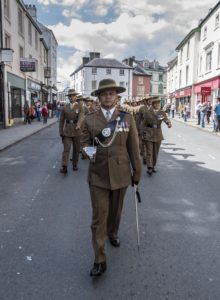 Historical accounts suggest that the Gurkhas first came to serve in Brecon in 1974. However, it was not until 12 December 1980 that a Company with a total strength of 85 formed up, to be known as a Gurkha Demonstration Company (GDC) under the old NCO’s Tactical Wing.

Ever since the arrival of Gurkhas in Brecon, they have played an important role in the local community and have become an integral part of the society. In recognition of their service to the community the Town Council of Brecon awarded the GDC Honorary Citizenship of Brecon to the Company on 21 November 1985. To mark the occasion, the first parade known as the Brecon Freedom Parade was held on 03 May 1986, and the tradition has continued ever since.

The Company was re-titled as a Gurkha Company (Mandalay) on September 2004. Due to the new structure of Army 2020, on 09 January 2014, the Company was reduced in size from 124 to 40 strong Gurkhas with additional 20 across the Training Support Division and was renamed as Gurkha Wing (Mandalay).

However, due to added responsibilities the current strength has increased to 68 Gurkha personnel in total.