This year was the 50th Anniversary of the Kadoorie Agricultural Aid Association British Gurkhas Nepal (KAAA BGN), marking 50 years of philanthropic work in Nepal for Gurkhas and Nepali people by the Kadoorie family. 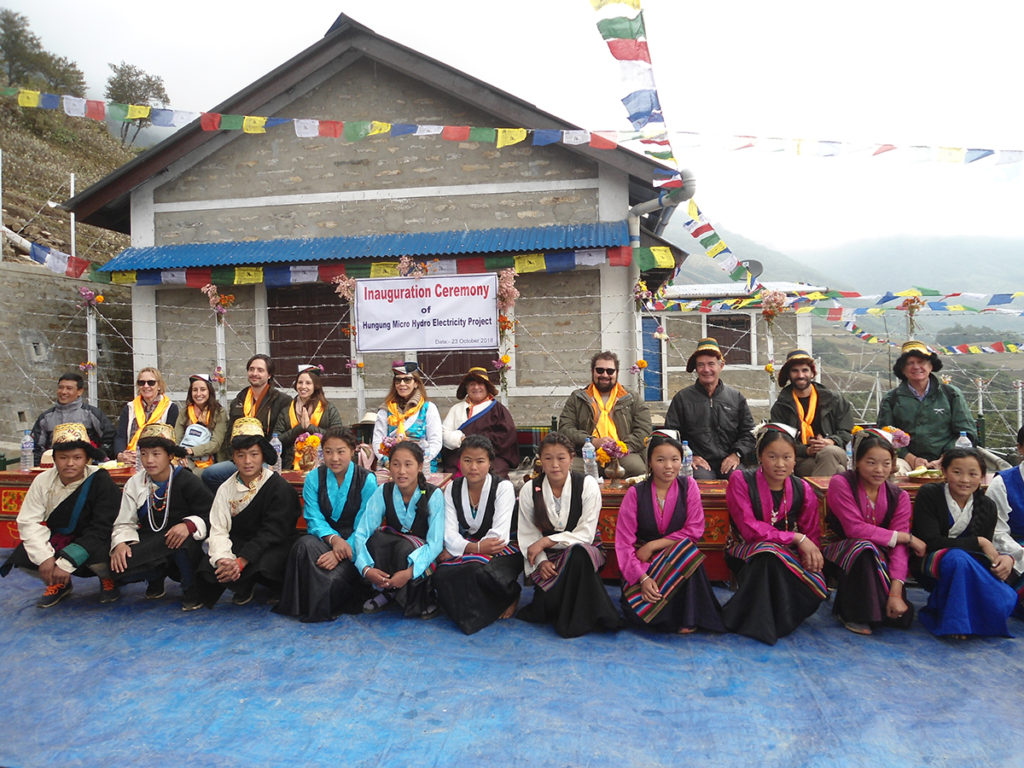 After many months of planning our Director, Colonel (Col) (Retired) Andrew Mills OBE, welcomed Sir Michael Kadoorie.  With Sir Michael were his wife Lady Betty Kadoorie, and children Natalie and her husband Diego, Bettina and her partner Shane, and Philip.  Accompanying them were the Director of the Kadoorie Charitable Foundation, Col (Retired) Christopher Lavender MVO and Mrs Griselda Lavender. 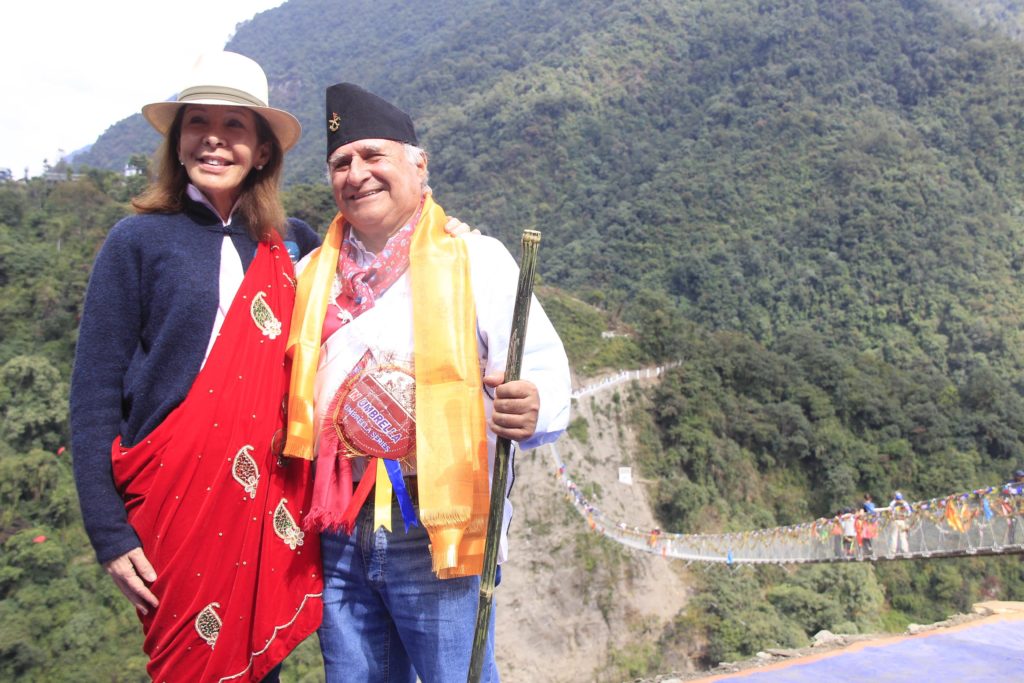 On the first day, after being brought up to date on KAAA activities in Nepal by Col Andrew, the family visited British Gurkhas Nepal (BGN) where Col Ian Logan (DA/Commander BGN) and his team hosted them and gave overview of their roles and work. In the afternoon, the group played cricket with the Cricket Association for the Blind (CAB), an organisation supported by the family.

From the second day, the family visited KAAA projects.  At Teka, Ghat and Thadakoshi villages in Solukhumbu, they inaugurated our Drinking Water (one house one tap) scheme costing US$ 117,000 and serving 351 villagers, and at Hunggung, Sankhuwasabha our 100kw Micro-Hydro project which cost US$ 520,000 and serves 240 households (about 1,500 people).  In the evening, the family hosted Lieutenant General (Lt Gen) Nick Pope CBE, Deputy Chief of the General Staff and Chairman Gurkha Welfare Trust, Col James Robinson, Colonel Brigade of Gurkhas and Col Ian Logan to a dinner at which Sir Michael presented Lt Gen Pope with the KAAA 50th anniversary photobook.

On day three they visited projects in Central Nepal, starting with our Langtang-Kyanzin 100 KW Micro-Hydro project in Kyanzin, Rasuwa which at 3,800m is our highest project to date with the intake being fed by a glacial lake at 4,100m.  The project cost US$ 534,000 and serves 121 households in Langtang and Kyanzin.  From here, the family dropped in on Linjho village, North Dhading to view our ongoing Earthquake Reconstruction Programme and Apple Farm Project.

Their next stop was our Electricity Line Extension project at Sirdibas Uhiya where the line extension from the 150kw Sirdibas-Philim Mini-Hydro project  in North Gorkha which cost US$ 370,000 has benefitted a further 470 households to take the total number of beneficiaries to over 5,000 villagers.  On Thursday 25th October the family visited our 135kw Mini-Hydro project at Lukumkhola, Bhume Rural Municipality, Rukum which cost US$ 867,000 and serves 3,000 people from 590 households in 3 villages.

Then they went on to visit Jhinu, Ghandruk to inaugurate our longest trail bridge to date, the 287m Samrong Khola bridge which was completed at a cost of US$ 311,000 for the benefit of 5,000 locals and up to 30,000 trekkers a year.  Finally, they paid their respects at the Sir Horace Chautara in Chhomrong built in memory of Sir Michael’s uncle who with Lord Lawrence, Sir Michael’s father, established the KAAA in Hong Kong in 1951.

The evening of 25th October the family attended a dinner party at British Gurkhas Pokhara with all the staff of KAAA and our wives, and Mr Richard Morris Her Majesty’s Ambassador to Nepal, Lt Gen Pope and other distinguished guests. Sir Michael gave a stirring speech after which Natalie, Bettina and Philip also spontaneously stood up and reiterated their father’s message, which was that Kadoorie aid to Nepal would continue into the foreseeable future. 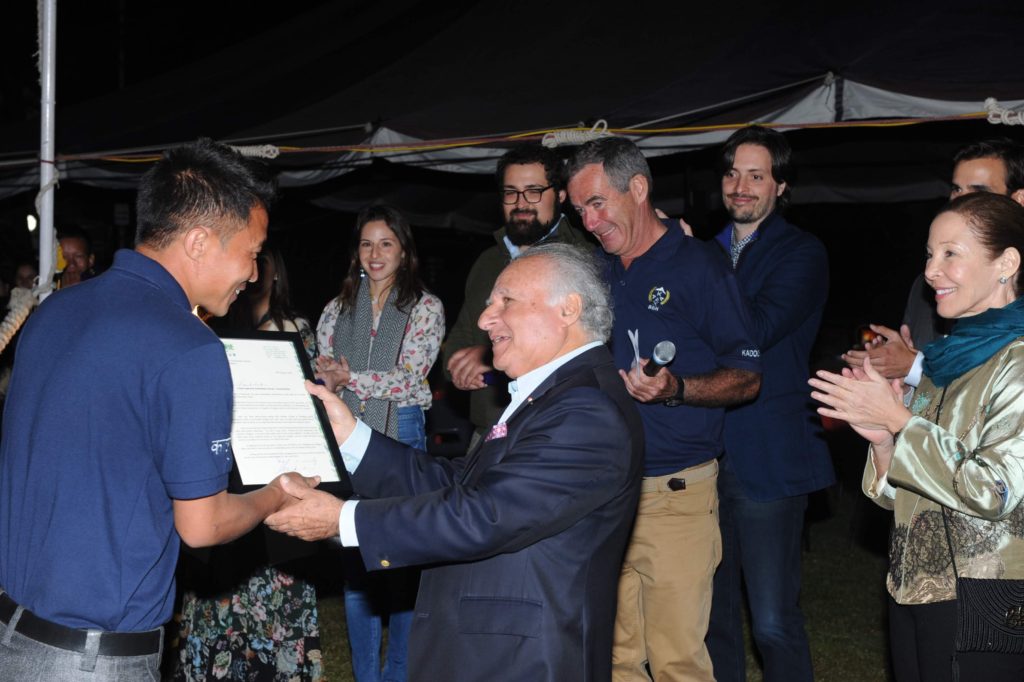 The next day, Sir Michael and Lady Kadoorie called on the President, The Right Honourable Bidhya Devi Bhandari accompanied by the British Ambassador and Director KAAA.  Meanwhile, Natalie, Diego, Bettina, Shane and Philip embarked on a short trek in Baglung accompanied by Col and Mrs Lavender and Captain (Retired) Dutman from KAAA.