A wonderful article about the Gurkhas and their history on the May Edition of the Field Magazine.

Roger Field writes about the Gurkhas celebrating their 200 years of great history on the May edition of the Field Magazine. It has been exactly reproduced below:

Gurkhas have fought for the British Army for two hundred years. With such a determined and ferocious enemy, it was essential to have them on our side.

Gurkhas have fought for Britain in many significant campaigns for the last two hundred years. With such a determined and ferocious enemy, it had seemed only natural to recruit them on condition that Britain would have the authority to appoint soldiers in Nepal.  The Gurkhas have been with us since.

Exactly 200 years ago The East India Company and the Kingdom of Nepal were slugging it out in a bloody and bruising war. The British, on the basis of, “If you are not beating them, get some of them to join you”, decided to raise a regiment of Gurkhas. They, equally impressed by the Brits’ martial qualities, signed up and, war over, many more regiments followed. And so it was that our long and deep relationship with these doughty mountain warriors was born.

I first came across the Gurkhas as an officer cadet at Sandhurst. Like so many before and since (there was always a Gurkha “demon-stration” battalion based nearby), we marched off for Fieldcraft, Lesson One. Gazing out over acres of yellowing September heather, the directing staff (DS) asked whether we could see anyone. “No, Sir,” we replied. And, hard as we looked, we could not. A nod from the DS, a command in Gurkhali from a sergeant and an entire section of heavily armed Gurkhas got up from right in front of us. It was deeply impressive and also scary: their skill, our blindness. Like many of my generation, I had heard stories of them sneaking into enemy encampments at dead of night during the Second World War, checking the sleeping men were Japanese by feeling their boots (“they” crossed their laces, “we” tied ours parallel); then slitting their throats before disappearing back into the jungle.

That day at Sandhurst I not only believed those stories but that display of superb fieldcraft instilled in me a deep sense of wanting these men on my side, never as my enemy. Back at Sandhurst 40 years later, I asked Colonel James Robinson, Colonel Brigade of Gurkhas, to distil the essence of a Gurkha soldier and that 200-year relationship. He pointed to a large, bronze plaque leaning against the wall of his office. It commemorates “Three Gallant Soldiers” killed in action at Dargai in 1897, including Captain John Graham Robinson, his great-great-great uncle. There has been a Robinson in the regiment ever since. The colonel still carries his forebear’s sword, a weapon he shows me with pride.

Similarly, some Gurkhas can trace their families serving for five generations. While tradition is one strand of the story, it is more complex than that. Gurkhas desperately want to join the Brigade, not least because it is, for them and their families, like pulling the ace of spades in the playing pack of Nepali life. Acceptance means wealth nearly beyond compare in that poor mountain kingdom. The soldiers understand the opportunity they are given. They are happy to repay that obligation, and with interest. Conversely, their British officers are somewhat “different”. They must be determined to lead Gurkhas. For starters, and until the recent spread of the internet and very much higher standards of education in Nepal, soldiers did not speak English. To lead their men in battle officers had to speak basic – “fighting”, at least – Gurkhali. And that takes commitment. Because, as Robinson explains, language is the route in to understanding their culture. And, for mutual respect, soldiers and officers must first understand each other.

Captain Sam Meadows, Adjutant of the 2nd Battalion, The Royal Gurkha Rifles, joins us and explains that the Gurkha is essentially deeply competitive. Furthermore, he learns well and rigorously applies what he is taught. It is this – and exceptional courage and fitness – that is at the heart of what makes Gurkhas such exceptional soldiers. For example Gurkhas, he tells me, are not “natural” shots. But, in 2014, they won The Queen’s Medal for the best individual shot in the Army and won the team events for brigade, division and the Army itself. And these guys are not natural shots? “They listen. They learn. They apply those lessons. Then add their determination to win and that is the result,” Meadows explains. Similarly, with a recent Brigade “patrols” competition: nine teams of Gurkhas entered the competition. They finished one to eight, a “British” team, ninth and the bottom Gurkha team, 10th. “How did they take that?” I asked, mischievously. “To say that 10th team was disappointed is to put it mildly,” was a far as Meadows would go.

The Brigade takes 230 new soldiers a year in one annual selection held in Nepal. Thous-ands of fit and determined Nepalis apply. Only 500 make it to the final selection. One requirement is that a recruit must be able to do 12 pull-ups, a test of upper body and arm strength. When I joined up many managed only five or so and achieved 10 by the end of training. And, if anyone (except Gurkhas or Special Forces, of course) is sneering as they read this, then I suggest they see how many times they can haul their heavy, Western bodies up to that bar. So, 12 heaves sounds good. But, and what few know, is that a standard “Nepali” pull-up is to nipple level. We only just pulled our quivering chins to the bar. Par for day one of selection is about 18. Some pull 44.
After training? Meadows recounts a muscular Fijian taking on his sergeant – in full body armour. The Fijian heaved an impressive 16. The Gurkha added a General Purpose Machine Gun over his armour to keep things interesting and pulled an easy 17. Then did “one more for luck” with the bar behind his head. And endurance? They are mostly mountain men and, from childhood, they run and carry to a level few Europeans can comprehend, let alone emulate.

Left: Gurkha rifleman firing in Burma. Right: A Nepali boy about to leave his home life as a Gurkha.

How can a British officer physically outperform them? The answer is, few do. But the soldiers do not look to him for this. An officer leads by looking after his men, by being skilled at his craft, by respecting them. Then they will follow him anywhere and do anything asked of them – and more.

And that legendary ferocity that has seen them awarded endless gallantry medals in umpteen conflicts? Colonel Robinson explains that you could not hope to meet a more cheerful, hospitable and friendly soldier than a Gurkha. But, when “the red mist comes down” he becomes something altogether different. And nothing is more inexorably linked with that killer fury than the kukri: the lethal, curved, Gurkha fighting knife.
Was it true, I asked one former colonel, that, pulled from its sheath, the knife had to “taste” blood? “They’d bleed themselves out in a fortnight,” was his amused dismissal of that myth, explaining that they used it as an all-purpose tool: peeling spuds, cutting wood or removing bottle tops. But, when that red mist does
come down, it is for his kukri the Gurkha instinctively reaches. Anyone who has read George MacDonald Fraser’s Quartered Safe Out Here will recall his description of Gurkhas as-saulting a wooded Japanese strongpoint. They attacked across open ground, firing as they ran until, just before they hit the wood line, they dropped their rifles and went in with blades only. They returned – unlike the Japanese.
Meadows tells how, in Afghanistan in 2013, insurgents attacked LCpl Tuljung Gurung in his sangar. First he was shot. A lucky deflection off his helmet left him stunned. Next, a hand grenade landed beside him. He lobbed it back. Finally, up went an Afghan, out came his kukri and down went the insurgent. He was awarded a Military Cross.

Which brought us neatly to the Gurkha on the modern battlefield. Meadows explains how impressive they were in Afghanistan, whose terrain is similar to that of Nepal. Gurkhali has the same linguistic roots as Pashto, Dari and Urdu. For example, the word for enemy – dushman – is the same in all four languages. Gurkha soldiers got to know the local Afghans and in the summer of 2012 in Helmand he and his men felt so unthreatened around their base that they would happily have patrolled without helmets or body arm-our. The locals told them where the IEDs were as they did not want to see their friends hurt.

British generals now see a well-educated generation of soldiers who no longer work just as infantry but in Gurkha Signals, Engineers and Logistics regiments. Gurkhas can transfer out of the Brigade after five years and they are to be found in Special Forces and even the Royal Navy. Colonel Robinson makes the telling point that, were Britain to be in sudden need of fully fit recruits, there is no shortage of such men ready and willing in Nepal.
All of which is cause for optimism in their 200th anniversary year. Fund-raising is at the heart of this summer’s celebrations. Gurkhas living in Nepal, who retired before 1975, receive no pension and that leaves many re-liant on the Gurkha Welfare Trust (GWT), set up in 1968, to help them cope in old age. The GWT wants to raise much-needed funds. 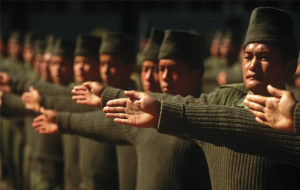 The highlight of this anniversary year will be the Gurkha 200 Pageant on 9 June at The Royal Hospital Chelsea, where the Gurkha story will be told by their ultimate pin-up girl, Joanna Lumley, together with Dan Snow.

There are also various “anniversary challenges”. Extraordinarily, no serving Gurkha has stood atop Mount Everest, a glaring omission an expedition intends to rectify this May. Simultaneously, two Gurkhas will circumnavigate Ellesmere Island in the Arctic Circle: a 1,500-mile odyssey involving kayaking and dragging said kayaks over some of the most inhospitable terrain on earth.
Meadows, concerned I had not yet understood the essence of a Gurkha soldier, des-cribed a journey to visit a legendary warrior high on his mountain. It transpired that Sabitman Tamang had not seen a British officer since the Second World War. Aged 92, he rushed inside, donned hat and medals and, standing rigidly to attention, threw a smart salute. He then showed Meadows his farm, which he still ploughed using buffalo: horned, aggressive and dangerous. One beast, perhaps unsettled by the westerner, took a determined swing at Tamang, who clouted him hard in the face with a perfect backhander. The huge buffalo recoiled in shock. “That’s a Gurkha.”

FOLLOW US
The Queen's Gurkha Signals celebrated their 71st B