Ambassador of Nepal to the UK visits Infantry Battle School 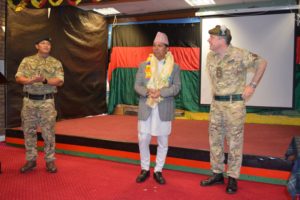 The Ambassador of Nepal to the UK visited the Infantry Battle School on 24th July 2017.
On his arrival at IBS, he was greeted by the Commanding Officer(CO) IBS, Lieutenant Colonel Rennie MBE.
He was given a short brief by the CO and later hosted by Gurkha Wing Mandalay. 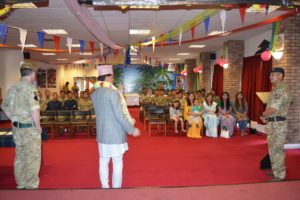 The ambassador delivered a short speech to the families and Service personnel of Gurkha Wing Mandalay before engaging in a small group conversation with all the personnel including families.
In his speech he quoted “I will try to work diligently and do everything I can to make sure Nepal is visible, noticed, remembered and respected in the UK.”
I

t was an excellent opportunity to all the personnel present in the event to know more about His Excellency and raise their issues and concerns to the Ambassador directly which will not only be beneficial for the serving Gurkha personnel but also to the Nepalese communities in the UK.
The event concluded with a light lunch and a group photograph with the Ambassador. 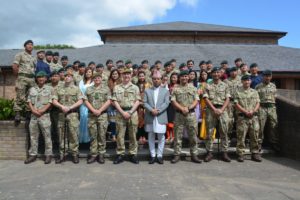