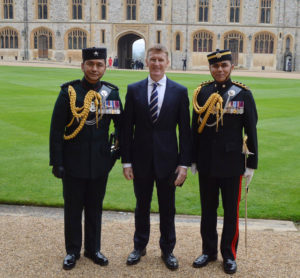 Maj Tim Peake with the QGOOs at Windsor Castle

Major Tim Peake recently received the most Distinguished Order of Saint Michael and Saint George from Her Majesty The Queen on 2nd December 2016 at Windsor Castle. The Queen’s Gurkha Orderly Officers; Captain Lalit Gurung & Captain Ganesh Tamang were present and took the opportunity for a photograph with this celebrity.

Peake beat over 9,000 other applicants for one of the six places on the ESA’s new astronaut training programme.

He was launched to the International Space Station (ISS), on 15th December 2015, for Expeditions 46 and 47. He launched successfully at 11:03 GMT from Baikonur Cosmodrome on board Soyuz TMA-19M.

During launch, as per tradition, each cosmonaut was allowed three songs to be played to them. Tim chose Queen’s “Don’t Stop Me Now”, U2’s “Beautiful Day” and Coldplay’s “A Sky Full of Stars”.

Whilst docking, the Kurs docking navigation system failed, and a manual docking was performed by Yuri Malenchenko. This delayed docking with the ISS by 10 minutes. The Soyuz finally docked with the ISS at 17:33 GMT. Peake received messages of support from the Queen and Elton John, after the successful docking. His first meal at the ISS was a bacon sandwich and a cup of tea.

A new year message by Tim Peake was broadcast by the BBC to celebrate 2016. 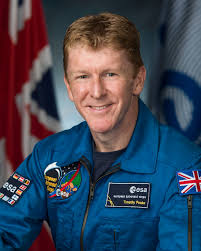 He participated in the first spacewalk outside the ISS by a British astronaut on 15th January 2016. The purpose of the spacewalk was to replace a faulty sequential shunt unit on the station’s solar arrays.

Peake was appointed Companion of the Order of St Michael and St George (CMG) in the 2016 Birthday Honours for services to space research and scientific education.

On 18th June 2016, Peake returned to earth from the ISS aboard the descent module of the Soyuz spacecraft that had taken him to the space station in December 2015. The spacecraft landed on the Kazakh steppe in Kazakhstan almost 480 km (300 mi) south west of the major city of Karaganda, landing at 09.15 UTC. Peake had completed approximately 3000 orbits of the Earth and had covered a distance of 125 million kilometres (78 million miles).