Gurkhas have always been known for their bravery all over the world. The battle cries of “Ayo Gorkhali” have terrified many an enemy on the battlefield. As Cpl Lama sends instructions and rallies his troops for the final push, Rfn Avtar strides down towards the enemy. He aims carefully and can see his opponent panicking, the silence is broken with the shout of Howzzzzzzat (how is that) and the umpire lifts his index finger. The team rejoices and savours another fine victory for the Gurkha Lions.

The Gurkha Lions Cricket Club was formed during the last month of 2011 with the kind permission of the British Forces Brunei Commander Lt Col Rea. Cpl Jigmi Lama was nominated as the Cricket IC and was handed the gigantic  task of forming a team from scratch. Within a short span of time the Gurkha Lions have managed to attract many budding cricketers from within the BFB community to form a very strong cricket team.

After leading the Gurkha Lions to victory in their very first game, Cpl Lama nominated Rfn Gambahadur Gurung, Support Company 2 RGR as the team captain. So far, the Gurkha Lions have played eight matches to date and have won seven – losing one game by a very close margin to the Brunei Division 1 Champions. 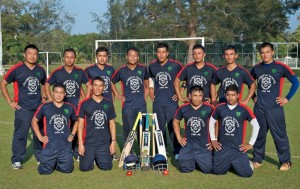 In the first game, (acting team captain) Cpl Lama lost the toss and this led to Panaga opting to bat first. A strong partnership developed between the Panaga’s opening batsmen which was finally broken by the crafty leg spin bowling of Rfn Pradesh, soon wickets started falling steadily at regular intervals as the Gurkha Lions bowlers teased and probed the Panaga batsman with a good line and length bowling. At the end, Panaga managed to score 124 runs with a loss of eight wickets in their allocated 20 over; A/Sgt Dickinson had a fine game for Panaga with a score of 52 runs.

A disappointing start by Gurkha Lions with a loss of two quick wickets brought early joy to the Panaga side.
buy synthroid online yourcialisrx.com/dir/synthroid.html no prescription

However, the explosive batting by Rfn Avtar along with Rfn Pradesh and Rfn Kharka helped The Gurkha Lions to a superb victory with five over still to play and a loss of just three wickets.

The second game played a week later between Panaga Cricket Club and Jerudong was won comprehensively by Jerudong. Panaga batting first scored 98 for the loss of seven wickets while Jerudong easily managed to cross the target in the 12th over with a loss of just one wicket.

This led to a very interesting final match between Gurkha Lions and Jerudong with the winners to be declared the Champions of the Tournament. Unfortunately, the weather Gods had other ideas as rain lashed down at the pitch making play impossible. It was decided that the match be postponed to the following week.

On 27 May 2012, a glorious morning welcomed the cricketers as they made their way towards the pitch.
buy zoloft online yourcialisrx.com/dir/zoloft.html no prescription

Team Captain Rfn Gam won the toss and made a wise decision to bowl first as the captain rattled the opening batsman wicket in just his fourth ball. Rfn Avtar from the other end bowled hostile deliveries to keep the batsmen at bay. Two deliveries from Avtar into the rib cage was enough for the Jerudong batsman as the batsman frantically signalled to his team members for more protective gear. At the end of the Jerudong innings, the scoreboard read 133 with a loss of six wickets.

The Gurkha Lions opening pair of Rfn Ganga and Rfn Mahendra played with authority as they managed to score 58 in the first 10 over. With 76 runs needed to win from the last 10 over, a sudden loss of four quick wickets brought the game back in the favour of Jerudong way. LCpl Pirthvi and LCpl Subash slowly started to build momentum for the Lions but all looked lost when Subash became the fifth batsman to fall at the 16th over with 35 runs still needed. In came Rfn Pradesh and hammered seven fours before he was bowled in the last over with three balls remaining and six runs to win. A wide on the first ball faced by Rfn Narayan and four runs of the next two deliveries meant that a run off the last ball would insure victory. As the last ball was bowled, the tense looking Gurkha lions bench erupted as Narayan sweetly timed his stroke for four runs.

It was a well fought victory which shall certainly be remembered. The moment was made sweeter by the fact that the first tournament ever participated by the Gurkha Lions resulted in the Lions becoming the champions. The omens look very good for the young Lions and it would be no surprise to find a few cricketers from this team playing in the Army Cricket Team in the near future.