Baroness Boothroyd calls for celebration and recognition of Gurkha anniversary

24th February 2015
Baroness Betty Boothroyd tabled a question to the House of Lords today asking what Her Majesty’s Government planned to do in celebration of the  200th anniversary of the Gurkha Battalions. She also requested that they acknowledge the service of Gurkhas to the United Kingdom and their relationship with the British people. 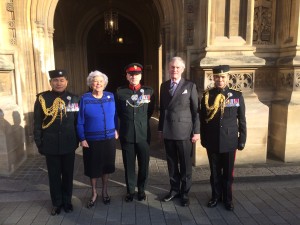 A number of Lords voiced their support of the Gurkhas in response, with Parliamentary Under-Secretary of State, Ministry of Defence Lord Astor of Hever stating: “My Lords, this year we mark the bicentenary of Gurkha service to the British Crown. Gurkhas hold a special place in the hearts of the British people and we will be celebrating our close and enduring relationship. The Brigade of Gurkhas will be holding many events over the year, including a parade and a memorial service in Whitehall in April, and Gurkha units will conduct public duties in London during May.” and he went on to agree with Baroness Boothroyd that “Gurkhas within the British Army are proof that different religious and ethnic groups can work together in defence of a set of common values based on the mutual trust and respect that has grown over the last 200 years and I am immensely proud to have served alongside Gurkhas in Malaysia and Hong Kong.”
There were also calls from Lord Rosser to ensure a clear and continuing role for the Gurkhas in Army 2020 which was echoed by Lord King of Bridgwater and Lord Astor, quoting Prince Harry who said that “there was no safer place than by the side of a Gurkha.”
A full transcript of the debate is available on Hansard with a a video of the debate available here (from 14:44 onwards – some media player options allow for fast forwarding).