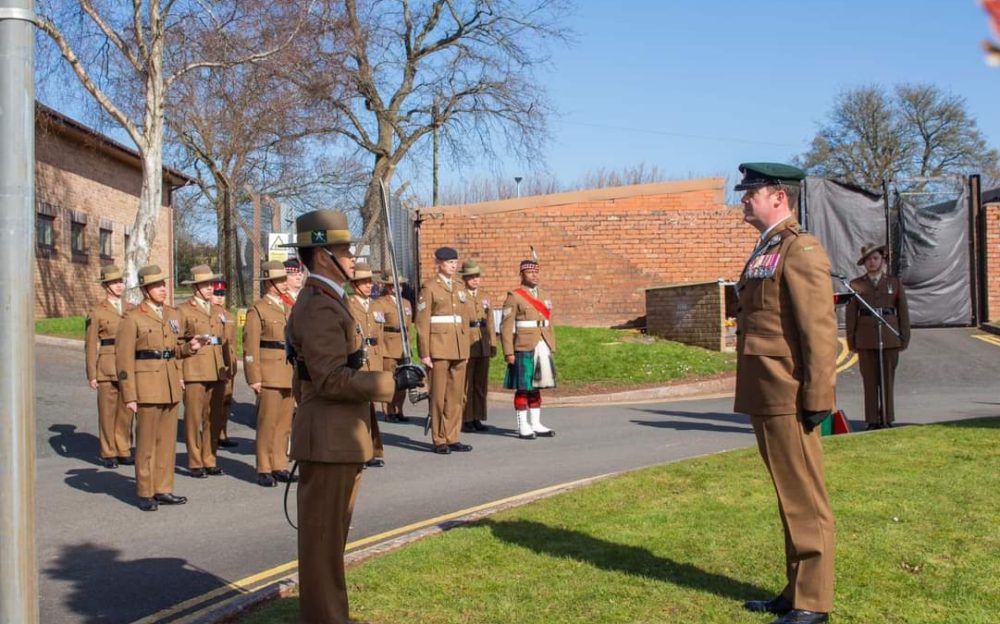 The temple service was organised in the morning, followed by a remembrance parade. All Wing members, including Lieutenant Colonel DJ Flanagan MBE Commanding Officer, IBS, were present on the parade.

Mandalay Day marks the fall of the city of Mandalay in Burma on March 20th 1945. The fall of Mandalay was the culmination of the advance south of the 19th Indian Division, after crossing the Irrawaddy River in force in late January 1945. Known as the ‘Dagger Division’ for its symbol, a raised arm holding a dagger, the Division included the 1st and 4th Battalions of 6th Gurkha Rifles.

Five weeks of fierce fighting followed the Irrawaddy crossing, as the momentum of the Allied forces advance carried them forward. By March 7th, Allied forces were in sight of Mandalay and by March 10th, 4th Battalion 4th Gurkha Rifles had helped capture most of Mandalay Hill itself. The fight was all the more difficult because of restrictions that had been placed on use of artillery in order to protect the many temples and pagodas which dotted the hill. Stiff resistance was encountered further inside the town as the 30-foot high, 4-foot thick walls of Fort Dufferin (a former Burmese royal palace), surrounded by a moat proved difficult to breach, even resisting attempts to ‘skip’ bombs over it to the walls.

For 10 days, 1st and 4th Battalions of 6th Gurkha Rifles engaged in bitter street fighting in the areas around the fort, until the Japanese forces withdrew on the night of March 19th/20th, leaving the city in Allied hands. The capture of the city was celebrated on March 21st by the hoisting of the Union Jack over Fort Dufferin at a ceremony presided over by General Sir William Slim, Commander 14th Army and himself formerly of 6th and 7th Gurkha Rifles.