On the 8th July the serving community of the Brigade of Gurkhas and veterans came together for the 2017 Brigade Bhela.

This annual event is held on the sports field in Aldershot Garrison and attracts over 3500 from the Gurkha community. 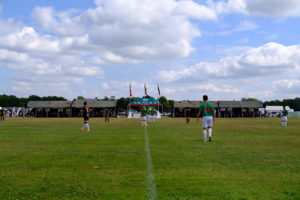 The day started with the Kathmandu cup, a football competition for the Veterans of the current serving Gurkha organisations.

This year four teams battled it out with the veterans of the Royal Gurkha Rifles winning the cup with 2-1 win over the Queen’s Gurkha Signals. 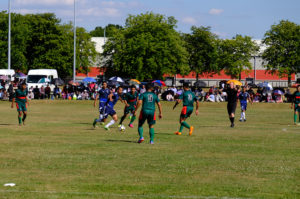 The main event of the day was the Nepal Cup final which this year was to be played between 1 Royal Gurkha Rifles (RGR) and Gurkha Company ITC. After a hard fought 90 minutes the teams were at 1-1.

This led to the need for extra time and with the heat making it already hard work the crowd cheered on both teams.

1 RGR though found the way through several times eventually winning 4-1. The Nepal cup was presented to the captain of 1 RGR by Colonel Brigade of Gurkhas and their Commanding Officer was clearly very pleased with the win as were the players.

The Band of the Brigade of Gurkhas were also on hand to entertain the crowds and took to the football pitch before the Nepal Cup final and at half time.

All the way down from Catterick Infantry Training Centre were over 200 Gurkha trainees. The trainees under direction of their training staff out on a display with the Kukuri knife and taekwondo which finished with an overhead kick of a water melon held on a Kukuri by another trainee.

The event has had a number of stalls and fun rides for all the family. We were pleased to host the Gurkha Museum, Gurkha Welfare Trust and the Gurkha Everest Team plus several military units and Gurkha/ Nepalese run businesses and food stalls.

The event was closed with cultural dancing.

A great day and we look forward to 2018 which will be bigger and better once again.