Borneo – The Brunei Revolt and Confrontation with Indonesia 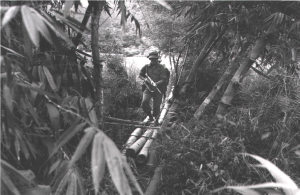 A Gurkha Soldier patrolling in the Borneo Jungle

Gurkha troops (1st Battalion, 2nd KEO Gurkha Rifles) were the first to be used again in an operational role at the outbreak of the Brunei Revolt in December 1962.

The battalion was alerted at 11pm on 7th December and the first company was air landed in Brunei, 900 miles away, at 9am the following morning. There followed four years on continuous operations against units off the Indonesian Regular Army in Sabah and Sarawak in which every unit of the Brigade of Gurkhas took part.

As they did in the Malayan Emergency, Gurkha units again provided the bulk and the continuity of the British Army’s contribution to this campaign.

It was in November 1965 that Lance Corporal Rambahadur Limbu of the 2nd Battalion, 10th PMO Gurkha Rifles won the Victoria Cross. When the Borneo campaign ended in 1966 there was a short lull before the Brigade found itself engaged in internal security tasks in Hong Kong during civil disturbances resulting from China’s Cultural Revolution.