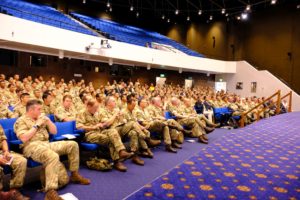 On the 5th July 2017  250 Officers and Senior Non-Commissioned Officers gathered in the Churchill Hall, Lecture Theatre at the Royal Military Academy Sandhurst for a Brigade of Gurkhas briefing and study day.

The day was opened by Colonel Brigade of Gurkhas, Colonel James Robinson who presented an update of current activity and developments within the Brigade and a look forward to possible future changes.

The day continued with Colonel Ian Logan, Commander Brigade of Gurkhas Nepal who presented an update on the current situation for the British Army in Nepal and then an insight into the changes in the political landscape in Nepal.

Before lunch the Director of the Gurkha Museum Trust presented his talk on the Burma Campaign a key part of Gurkha history in World War Two along with the Chindits the fore runners of the newly formed 77th Brigade. 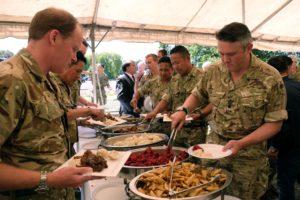 Lunch was taken outside in the form of a Gurkha style curry and gave time for colleagues and numberies to catch up with each other. Many Gurkhas in different units may not have seen each other for many months or even years.

After lunch Major Andy Todd MBE came to talk about the Everest Summit Success for the Gurkhas in May 2017. This had been a five year project and with the unsuccessful attempt in 2015 due to the earthquake the team eventually put thirteen Gurkhas on top of the world. He talked about the training, the issues they faced and the situations they had to deal with. After his talk he called the members of the Everest team to the stage and the Brigade flag that was taken to Colonel Brigade of Gurkhas and the Museum flag was presented to the Director of the Museum.

Next up was the inspirational leadership speaker and author James Kerr. He talked about his work following the All Blacks rugby team. The All Blacks are the world’s most successful sporting outfit, undefeated in over 75% of their international matches over the last 100 years. What is the secret of their success? And what can we – as individuals, companies and teams – learn from them? James through his inspirational approach and talk demonstrated how the All Blacks approach each game and their lifewhich leads them to be as good as they are. 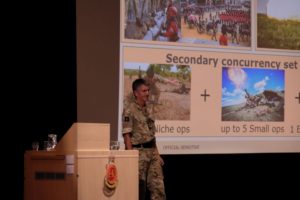 The day was wrapped up by our Colonel Commandant, Lieutenant General N A W Pope CBE. He talked about how the Army was evolving and needed to keep pace with the changing world but also stressed that the Gurkhas had a key part to play in the professional Army of the future.

This annual event is a great opportunity for those attending to not only catch up with the news and business within the Gurkhas and the Army but also an opportunity to learn about our history, learn leadership skills and leadership styles from key and inspirational key speakers.