The Versatile Engagement (VEng) was introduced as a new type of engagement on 1st January 2008. VEng consists of three stages:

Results of the VEng(S) to VEng(F) Conditional Board for Intake 2009, 2010 and 2011 have been announced last month.  Across the BG in 2018, 146 (this includes both automatic and conditional VEng(F) conversion offers) personnel have been offered conversion to VEng(F). 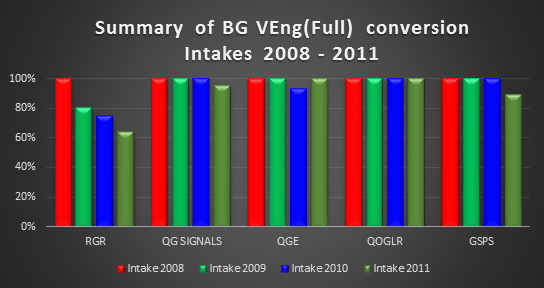 There has been significant success at improving career prospects (both VEng(F) opportunities and promotion opportunities) across all Units within the Brigade. The results of this conversion board are good news for all in the BG. The BG has been working closely with DM(A) in a bid to make significant enhancements to Gurkha careers and employment prospects.

Much of the success in increasing the VEng(F) conversion rate is the result of c.642 new posts for Gurkha soldiers and particularly the increase in Junior Non-Commissioned Officer and Senior Non-Commissioned Officer positions. Many of these are still coming on line and will continue to benefit future intakes for VEng(F) conversion purposes and promotion rates.