Brigadier Simon Banton OBE, who has recently taken over as Head of Arms and Services (Commander of all Regimental/Corps Headquarters) at Home Command, made his first official visit to Headquarters (HQ) Brigade of Gurkhas in his new role on Thursday 21st February.

The Brigadier received a welcome brief on the HQ and wider Brigade from Colonel James Robinson CBE and Major Shane Burton, who were able to explain the Brigade’s laydown and unique construct as well as the plans to help alleviate the Army’s current manning challenge before taking the time to meet and talk to other HQ staff over coffee. 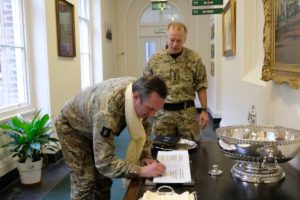 Brigadier Banton has taken up his new post having previously served as Chief of Staff at HQ Regional Command and was delighted to be able to talk about his previous experiences including three official visits to Nepal and Brunei.