Mention Mount Everest and people will automatically know where Nepal is; in essence, Mount Everest has been an ‘Ambassador’ for Nepal, helping to place her firmly on the map.

Every year people flock from around the world to Nepal to see Mountain Everest in all her splendour. Many people who witness the magnificent sight of Mount Everest for the first time are left with indelible images forever etched into their memories. I was particularly enthralled with the colossal size of Mount Everest and amazed at the overwhelming scenery that surrounds her. Such spectacular beauty, I will never forget my first sight of Mount Everest.   When the opportunity arose to go on a trek to Everest Base Camp (EBC) and Kalapathar, I didn’t hesitate, I signed up immediately.

There were seven of us: Laxmi Gurung with her perpetual words of wisdom and optimism; Kamala Limbu whose amiable and agreeable nature would boost one’s morale; Kamala Gurung who inspired us; Trishna Rai whose impromptu one liners and songs would keep us entertained; Ruth Fry whose enthusiasm was never ending and Teresa Day whose passion and drive was very contagious. 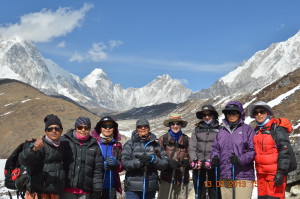 onto the tarmac at Lukla, we were amazed at the beauty that surrounded us – at the untarnished landscape not yet affected by westernisation. We were simply astounded by all that we could see. Whether it be modest Phakding or lively Namche Bazaar, whether it be peaceful Temboche or picturesque Deboche, whether it be quirky Pheriche or  the rhododendron shaded  Dingboche, or the Juniper scented Thukla or challenging Gorak Shep – all of these places remain untarnished by westernisation, a truly wonderful sight to behold.

Some may wonder if such a paradise exists, trust me it does! I have seen bridges embellished with prayer flags, heard the wonderful sound of the Dudh Kosi River, the music emanating from the monasteries and the hospitality that we received from the local people was second to none.

The trek to EBC was going to be tough. However, we persevered and pushed on. With a great deal of strength and determination we reached our destination relatively unscathed. We soon found out though that no one was immune from the wrath of altitude sickness and its effects. The fatigue disappeared as soon as we came upon the sight of Abu Dablam, the charming Thamserku, Lhotse and Nuptse.

After a much needed rest we set off for Kala Patthar; reaching the top was indeed difficult but we were rewarded by the spectacular views. It was an amazing feeling being at the top of Kala Pattar; a feeling that will be forever etched in my memory.

On behalf of all the Ladies I would like to take this opportunity to thank Major Hitman Gurung MVO, GM BGN, and Major Jim Thompson, DCOS BGN, for their encouragement and their support; we are very grateful. We all enjoyed our trip to EBC and will forever treasure this experience.