Captain E E Hayes (nee Freeborn) – Director of Music, The Band of the Brigade of Gurkhas 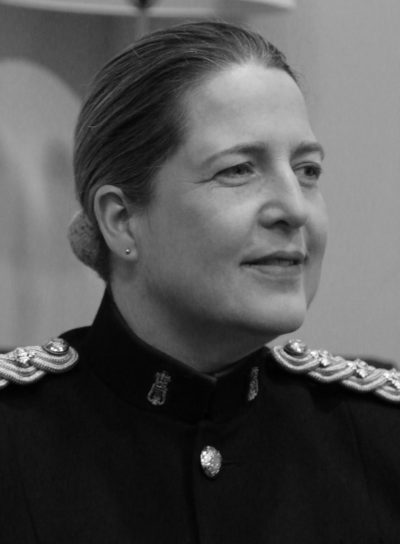 Captain E E Hayes (nee Freeborn) – Director of Music, The Band of the Brigade of Gurkhas

Captain Esther Hayes was born in Coventry in 1976, fostering an early enjoyment of music by learning the flute and piano. Whilst studying music at university she joined the Volunteer Warwickshire Band of The Royal Regiment of Fusiliers, an Army Reserve Band. After realising the worth of a full-time role as an army musician, she applied to join the Regular Army, receiving sponsorship during her degree.

She completed her initial Phase 1 training at the Army Training Regiment Winchester, arriving at the Royal Military School of Music, Kneller Hall in January 1999. She was awarded a Cousins Memorial Parchment in recognition of her high levels of performance.

After an assignment to The Band of the Royal Corp of Signals, she was successfully selected for a place on the prestigious Bandmaster’s Course at the Royal Military School of Music in 2003.

As a Bandmaster, she has completed assignments with the Bands of the Parachute Regiment, The Life Guards and The Queen’s Division, as well as the esteemed role as School Bandmaster at The Royal Military School of Music. Her most notable achievement was a deployment to the Afghan National Army Officer Academy in Kabul mentoring an Afghan Officer in lesson development and maintenance, as well as managing 64 Afghan interpreters.

Whilst working at Headquarters Regional Bands as the Operations Officer, she achieved the highly coveted Fellowship of the Royal Schools of Music in Conducting, qualifying her to select for commission. On commission Captain Hayes took up the new appointment of Senior Instructor Subsequent Trade Training at The Royal Military School of Music, the focal point for Bandmaster training and Subsequent Trade Training for the Royal Corps of Army Music. Although this involved the sad move from Kneller Hall, she contributed to settling into the new home at Gibraltar Barracks, very much embedded with the Royal School of Military Engineering.

Captain Hayes was assigned as Director of Music of the Band of the Brigade of Gurkhas in April 2022. She enjoys spending her spare time with her husband Michael and his son Aidan at their home in Dorset and the family like to take adventures on their Himalayan motorbikes, exploring the British countryside.

More about our Band