After the over-indulgence of Christmas and New Year’s numerous parties, we were ready to raise some funds for a charity.  This time, we chose the Aama Ghar (Mothers’ House), a charity based in Kathmandu where Mrs Dilsobha Shrestha singlehandedly looks after a number of old people (mothers and children) who have been victims of gross neglect and abuse by their own family.  With the GM didi’s guidance, a fancy dress ladies party was organised on 19 January 2013.  The party was organised at a very short notice but despite the appalling weather, the turnout was fantastic.

The fancy dress charity party was held at Connaught Leisure Centre in Aldershot.  Traditional Nepali food was prepared by QOGLR RCWO and his team of volunteers, which according to the guests of the night, was the best gruel ever.  The fancy dress itself was a great idea as the ladies turned up in all sorts – Amy Winehouse, Cruella-de-Vil, the Japanese geishas, Minnie mice, swarm of pirates, Roman kings and even a Maid Marian!  The best costume prize was taken by Cruella de-Vil, a well-deserved win.  No Nepali party would not be complete without a round of Bingo and raffle draw.  Finally, to conclude the evening, the floor was on fire with ladies putting their dancing avatars on.

Just before their return to the UK from their Duty Trek (Comd QOGLR Lt Col Blackmore, GM Major Khimprasad Gauchan) and Everest Base Camp expedition (WO1(RSM) Roberts), a sum of Rs 1 lakh 37 thousand was handed over to Dilsobha Shrestha, which was received with heartfelt gratitude.

It was a very successful event and our heartfelt thanks go to all the volunteers and the ladies who attended the charity event.  It was not just a QOGLR ladies party but open to all members of the society.  It was great to see everyone coming together to raise money for such a worthy cause in Nepal. 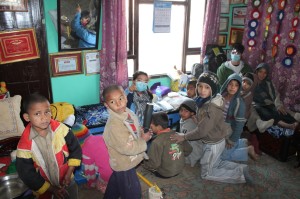