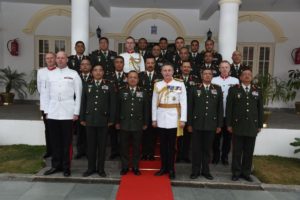 Following the visit in 2017 of General Rajendra Chhetri, Chief of Army Staff Nepal, to the UK, a return visit has been made by Chief of the General Staff (CGS), General Sir Nick Carter KCB CBE DSO ADC Gen, accompanied by Lieutenant Colonel M Mudd and the Army Sergeant Major Warrant Officer Class One G Haughton OBE.

Upon arrival at Kathmandu’s Tribhuvan International Airport on 6th February they were welcomed by a party from the Nepalese Army including CGS Nepal, Lieutenant General Thapa, and the British Defence Attaché Kathmandu, Colonel Ian Logan.

Later that day they moved to the Headquarters of the Nepalese Army and CGS inspected a Guard of Honour before holding an office call with General Chhetri and receiving a briefing on the Nepalese Army from a team of senior staff officers.

In the evening the Nepalese Army Officers Club welcomed the party with a spectacular cultural show and dinner.

The following day saw the party fly down to Pokhara, where CGS and Lady Carter moved to the Mandir at British Gurkhas Pokhara for a traditional blessing/puja. They then received briefs on both the recently concluded recruiting cycle and the work of the Gurkha Welfare Scheme.

The afternoon gave an opportunity to meet some welfare pensioners and visit the Area Welfare Centre and Residential Home at Kaski.

Friday morning dawned, Attestation Parade Day. As Inspecting Officer, CGS oversaw the Parade and had the chance, alongside Minister for the Armed Forces, the Rt Hon Mark Lancaster TD MP, to see the 270 new recruits to the British Army swear their Oath of Allegiance to the Crown.  Following the successful conclusion to the Parade a lunch was held which enabled the whole party to talk to both the new recruits and also their families.