On Sunday 10th July 2016, The Gurkha Statue at Church Crookham was unveiled by Captain (Retd) Rambahadur Limbu VC MVO in front of an impressive crowd of retired and serving military personnel and members of the Church Crookham community, past and present. The statue symbolises the 30 years Gurkhas served at Church Crookham and the wonderful relations forged between the Gurkhas and the local community during this time. Church Crookham shall never forget. 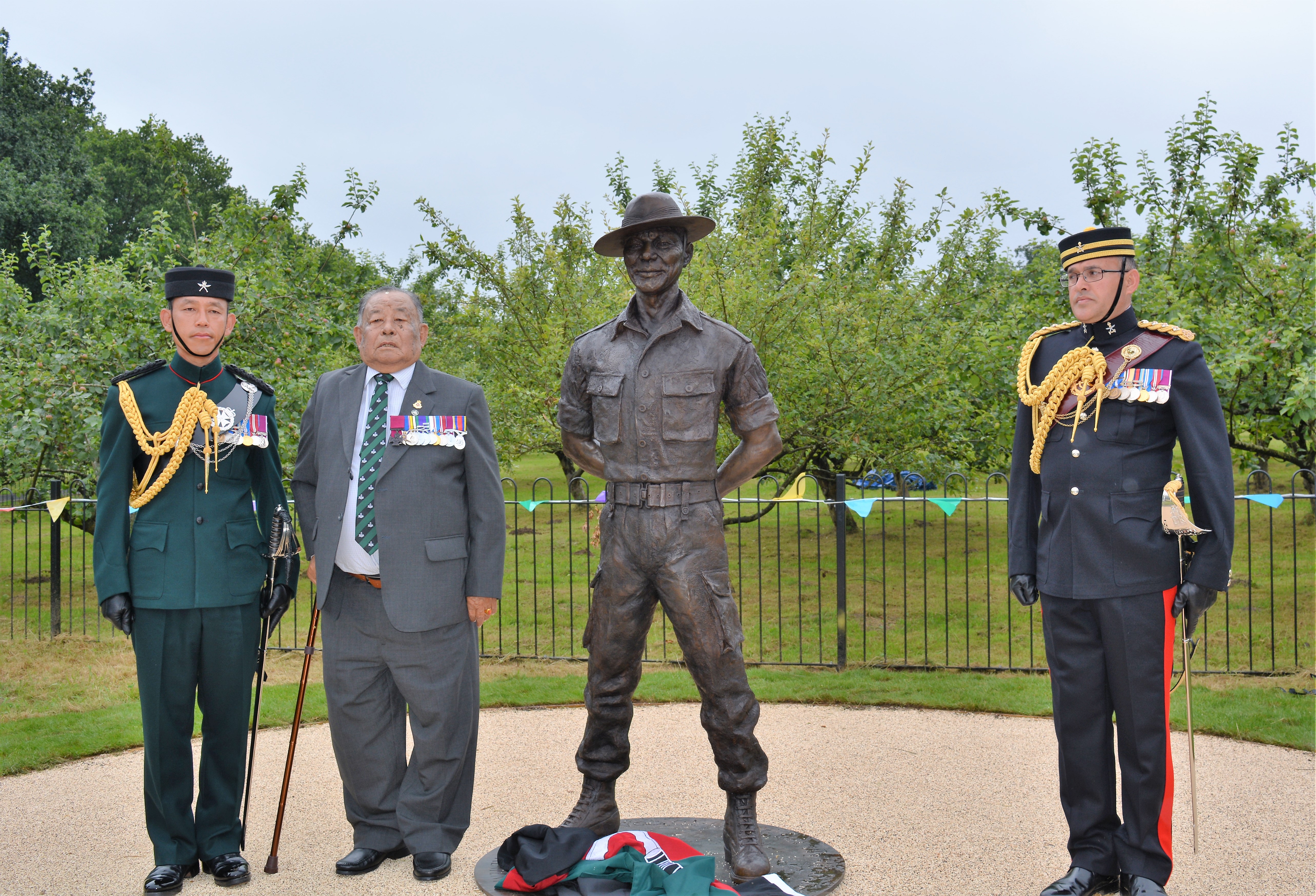 All the guests arrived at the Church Crookham Community Centre in the morning before moving down to the statue site, just a 3 minute walk away. On arrival at the site, the guests listened to music from the Band of the Brigade of Gurkhas. At 11am, the Church Crookham Parish Councillor Pat Lowe addressed the crowd, stating “we remember the smart gentlemen in their green jackets, always polite and smiling as they walked around the village….it was the Parish Councils’ decision to honour the Gurkhas by commissioning a statue to celebrate the Gurkhas and perpetuate their memory”. 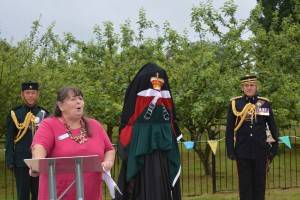 Lieutenant General Sir Peter Duffell KCB CBE MC, who commanded the 1/2nd Gurkhas in Church Crookham, stated, “Almost 40 years have passed since I commanded the 1st Battalion of the Second Gurkhas when we occupied the antique spider huts of Queen Elizabeth barracks. Old men forget much, but I can still recall with much nostalgia,  our time here before deploying to Belize to deter Guatemalan ambitions…..for 30 years between 1970 and 2000, successive Rifle battalions of the Gurkha brigade were stationed in these lines for two-year tours and overall some 12,000 Gurkhas must have briefly lived here on unaccompanied service before returning to the Far East. It was here that they sallied forth on operations to Cyprus at the time of the Turkish invasion, to the Falkland islands, to the First Gulf War, to Kosovo, Bosnia, and Macedonia.” 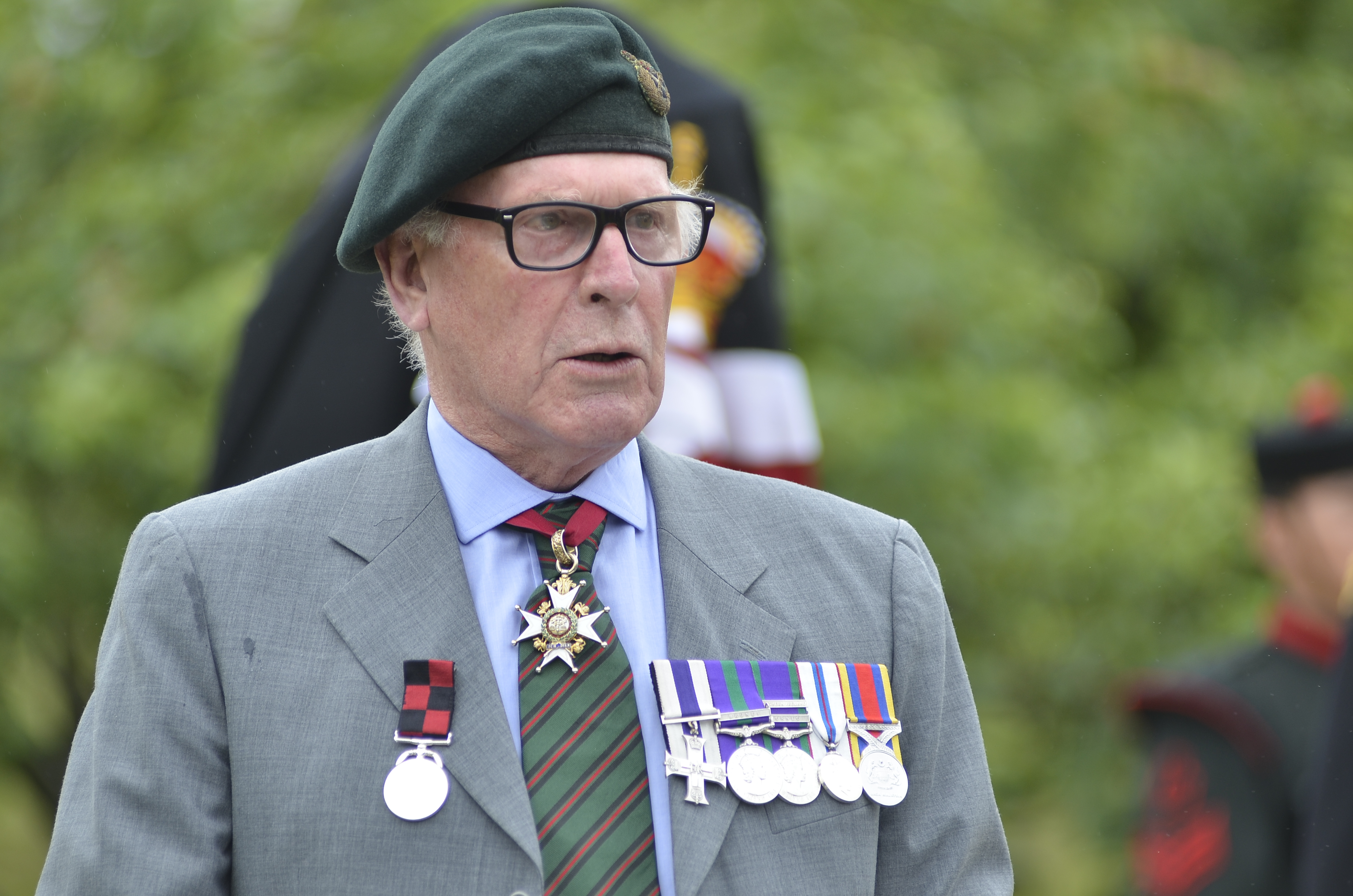 Tony Carter then spoke about what the public and other serving units had felt about the presence of the Gurkhas from the other side of the proverbial fence. He spoke fondly about the contribution Gurkhas had made to Church Crookham and the surrounding area during their tenure there.

Capt (Retd) Rambahadur Limbu VC MVO (whose citation can be read here) then stepped forward to unveil the Gurkha Statue. 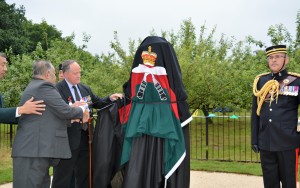 Afterwards Colonel Brigade of Gurkhas, Colonel James Robinson led the Act of Remembrance. Everyone stood still for the Last Post and a two-minute silence before the Reveille was sounded and wreaths were laid at the foot of the statue. 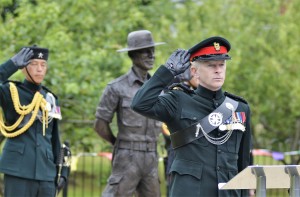 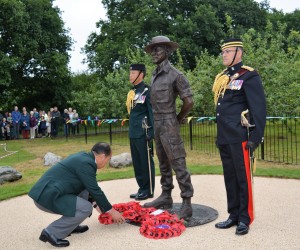 After the ceremony, everyone was invited back to the Community Centre by Pat Lowe for a Gurkha curry and cakes, tea and biscuits.

Credit must also go to Jemma Pearson the creator and sculptor of the ‘The Gurkha Statue’. Below is an extract from her description of her brilliant work:

“The Gurkha Statue will be important to the people of Church Crookham and Fleet, as well as to those Gurkhas and their families who will travel to see it as an act of both remembrance and celebration. The sculpture reflects the warmth that the local people have for The Gurkha Regiment, including the young recruits with their reputation of civility, enthusiasm, and cheer. It will mean that a sense of The Regiment’s presence will be retained well after their 200th celebratory year of 2015.

From a distance, the statue has a feeling of being on parade in front of the trees of The Sirmoor Orchard. The figure retains a proud upright posture yet “stands easy” in the most relaxed stance on a parade ground.

The soldier’s cheerful and proud expression is driven by two factors; firstly the Gurkha’s inbuilt capacity for mirth; secondly their pride in two centuries of successful collaboration with the British. Since the sculpture is designed to be the Keeper of the memorial Orchard there is the need for a certain level of formality, even shyness, so his warmth is expressed by a generous emerging smile rather than a full grin.”

Please have a look at more photos of the day from our gallery.