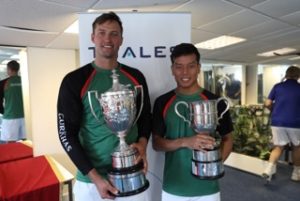 Last weekend saw the 95th Army Lawn Tennis Championships take place in Aldershot and, for the first time the Brigade of Gurkhas won not only the Men’s Singles trophy but also the Men’s Doubles. 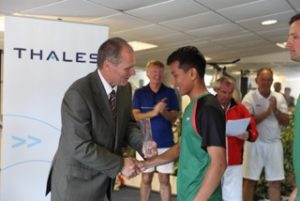 The First Battalion Royal Gurkha Rifles supplied the stars of the weekend with two entrants, Lieutenant Scott Sears, who last year narrowly lost out in the final, and Lance Corporal Taraman Gurung GSPS.  This year Lieutenant Scott Sears triumphed in the final by beating Lieutenant Alex Hadcock in 3 sets, 3-6, 6-2, 6-1, whilst Lance Corporal Gurung made it all the way to the third round before being knocked out by the 4th seed in three hard fought sets.

The pair then joined together to enter the Mens Doubles and had a fantastic tournament, making it to the final where they won in straight sets.

Both men will now represent the Army over the coming year, with their first outing being the Inter Services Competition in Birmingham this weekend.