Colonel Alan Jenkins, long-serving Gurkha officer and the last Western witness to the old Tibet before the Chinese Peoples’ Liberation Army marched in.

Colonel Alan Jenkins, who has died aged 94, had an adventurous life in the British Army; he was thought to be the last surviving Westerner to have seen the old Tibet before the annexation by the People’s Republic of China, and in 1966 he was awarded an MC during the Confrontation with Indonesia.

In November 1946, Jenkins was serving as Intelligence Officer (IO) with the 1st Battalion King George V’s Own Gurkha Rifles in the garrison at Razmak, Waziristan, a walled fort 7,000 feet up in the hills of the North-West Frontier Province. There were several battalions stationed at the base and their main task was to protect weekly road convoys carrying supplies from the railhead at Bannu. Soldiers were deployed astride the road and platoon-strength pickets posted on the high ground. Any slackness was an invitation to bands of Pathans who could be waiting in ambush, concealed in gullies or behind rocks, ready to fire a volley at close range before attacking with knives and running off with rifles and ammunition before support could arrive.

Jenkins’s commanding officer encouraged young officers to be adventurous. Jenkins and a brother officer, Hugh Bailey, wanted to follow part of the route taken by Francis Younghusband’s 1904 British Army expedition to Tibet and they were given eight weeks’ leave. Tibet was almost a closed country but the British Political Officer at Sikkim could grant short visits and, in April 1947, armed with a frontier pass, they hired four sherpas at Kalimpong and set out on a trek to Gyantse, a distance of some 160 miles. They crossed the 14,100 ft Nathu La pass, travelling in the mornings to avoid dust storms. Passing Mount Chomolhari, they went through Phari.

Jenkins wrote afterwards that the bungalow there was the highest post office in the world. The postmaster was an imposing Tibetan with a long plait and a heavy gold ring in one ear. If they met with a serious accident on the way, they realised, rescue would be almost impossible. At Gyantse, about 100 miles south-west of Lhasa, they stayed for three days. It was a British military base to protect the trade route, and stationed there was the Mounted Garrison Company of the 4th/5th Mahratta Light Infantry, equipped with lances and looking magnificent on parade. For Jenkins, it was the adventure of a lifetime which he never forgot.

Alan Middleton Jenkins was born at Meliden, Prestatyn, North Wales, on June 14 1927. His father served with the Royal Army Medical Corps in the First World War. His grandfather, a Royal Marine in the RN corvette Encounter, was severely wounded in an attack on Ningpo, a Taiping rebel stronghold, in 1862, in an operation in support of the Chinese imperial forces. Young Alan went to Rhyl Grammar School and, after being granted an Indian Army cadetship, he completed his basic training and embarked on a troopship bound for India. He left the ship at Bombay and took the train to Bangalore, where he attended the Officers’ Training School.

In April 1946, he was commissioned into the 1st King George V’s Own Gurkha Rifles (1 GR) and posted to Dharamsala in the Himalayan foothills. After a move to Nagpur, Central Provinces, as IO on internal security duties, he joined the 1st Battalion at Razmak. In 1947 he was granted a regular commission, and after Independence, in November, the battalion, having left the newly created Pakistan, was stationed at Gurdaspur, 40 miles north of Amritsar, Punjab. Large quantities of rum were needed for the Gurkha annual festival of Dussehra and he was ordered to take a three-ton truck and fetch supplies from Saharanpur, about 450 miles away.

He had been detailed to travel via Delhi and, arriving early one morning at Government House, he leaned out of the truck to ask the Gurkha sentry for directions. A large black limousine sped out of the gates and came to an abrupt stop. Jenkins was confronted by an irate Field Marshal Sir Claude Auchinleck, Commander-in-Chief Indian Army, demanding to know “what a scruffy officer was thinking of addressing a sentry on guard duty”. Jenkins returned to the battalion with his truck loaded with several huge rum barrels hidden under bales of straw after what he described as “a very important mission devoid of any military significance”. Coincidentally, Auchinleck, then a lieutenant, had been stationed at Gyantse in 1906, in command of the escort to the trade agent.

1/1 GR was transferred to the Indian Army and Jenkins joined the 1st/7th Duke of Edinburgh’s Own Gurkha Rifles (1/7 GR) in Rangoon, Burma. In January 1948, on Burmese Independence Day, he was in command of the guard of honour at the residence of the Governor General and lowered the Union Jack for the last time. His battalion then moved to Seremban, Malaya, at the beginning of the 11-year Emergency to counter the activities of communist terrorists. In March 1949, he was leading a patrol in the jungle when his batman was shot in the head and killed.

In June 1953, Jenkins returned to England to represent 1/7 GR in the marching contingent of the Brigade of Gurkhas at the Coronation. Early the following year he sailed from Liverpool to India in the troopship Lancashire where, at the height of a storm in the Mersey estuary, he encountered Flight Sister Julia Inkpen, who had been grounded after a Korean War evacuation air accident. Months later, on February 12 1955,  the couple were married by the Bishop of Barrackpore. Posted to a Gurkha recruiting depot with Mt Kanchenjunga as a backcloth, “Julia soon got used to our metal bath tub and the ‘Thunderbox’ for ‘essentials’. ” The Jenkinses joined the village life of Darjeeling. His time in India ended in April 1957, and he rejoined 1/7 GR in Malaya during the final phase of the Emergency. After staff and technical training in England, in 1963 he was posted to Sarawak, north Borneo, during the Confrontation with Indonesia.

In August 1966, intelligence reports indicated that Lieutenant Sumbi, an Indonesian army officer, was planning a raid across the border into Brunei with a force of about 50 men. Jenkins, then a major, in command of a company of 1/7 GR, set off in pursuit. The terrain consisted of high, cliff-strewn mountains covered in dense jungle and ravines swollen with incessant monsoon rains. The operation took two weeks and resulted in the capture of most of Sumbi’s force. Sumbi was also caught and provided information of great value. Jenkins was awarded an MC. The citation paid tribute to his grim determination and inspirational leadership. In 1966 1/7 GR moved to Hong Kong, and in 1969 Jenkins assumed command of the battalion. A year later the 1st and 2nd battalions were amalgamated to form the 7th Gurkha Rifles.

After an appointment as one of three Military Directors of Studies at the Royal Military College of Science, Shrivenham, in 1977 he was appointed Senior Military Officer at the high security establishment at Porton Down. In 1979 he took early retirement from the Army in the rank of colonel. He replied to an advertisement for the position of appeals officer and for the next 15 years worked tirelessly to raise considerable funds for two linked charities for the physically disabled, the Enham Village Centre in Andover and the Papworth Village Settlement near Cambridge.

He was Regimental Trustee at the Gurkha Museum, Winchester, and with his wife Julia, to whom he was devoted, ran a rural Meals on Wheels service around Andover.

In May 2008, the 14th Dalai Lama, who lives in exile in Dharamsala, visited Rhodes House, Oxford, for a group audience of “The British in Tibet”, represented by family relations of people who had travelled in pre-1950 independent Tibet. Jenkins was one of five old Tibet hands then still living; he was asked to join the Dalai Lama on the stage, where he was embraced. 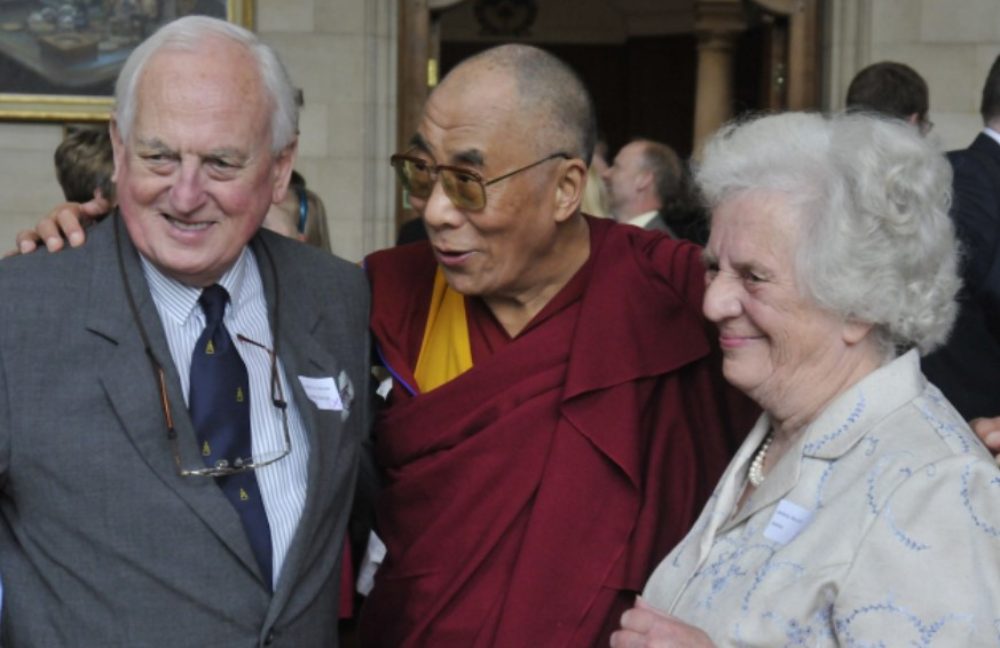 From the By Telegraph Obituaries 11 Apr 2022