The GWAC is a joint GWT and Headquarters Brigade of Gurkhas (HQBG) project. 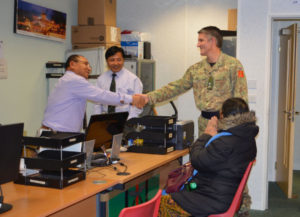 He was hosted by the Brigade Welfare Officers, Captain (Retd) Mahendra Limbu and Hon Lieutenant (Retd) Tulbahadur Gurung.  He was shown around the facility and was introduced to a number of veterans, some had just arrived from Nepal and were being given help to reside in UK and some were getting assistance to return to live in Nepal.

Captain Mahendra then provided a comprehensive presentation on the history of the GWAC, which has been supporting Gurkha veterans coming to UK since the law change in 2009. He also explained the process of settlement which begins with clarification of documentation with the Records Office in Pokhara and then a visit to the Gurkha Settlement Office in Kathmandu (also jointly supported by GWT and HQBG) to learn about life in UK and to start the initial documentation. 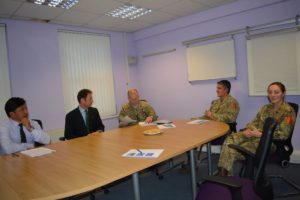 He continued by briefing on how some of the veterans coming to the UK gained support from service charities who are the experts in welfare delivery however the GWT provides annual grants to these organisations to assist.  Finally General Pope learnt about recent changes to the online applications and the introduction of the Universal Credit.

At the end of his visit he thanked the staff and volunteers at GWAC for their hard work  and dedication in looking after Gurkha veterans.