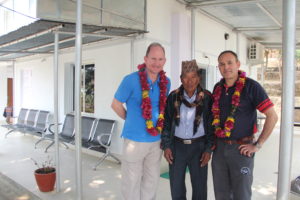 During their visit, and prior to the trek, they took the opportunity to visit both British Gurkhas Kathmandu & Pokhara as well as the Kadoorie Offices and Headquarters Gurkha Welfare Trust (Nepal) in Pokhara before travelling to Gorkha and the Area Welfare Centre there.

They then trekked in the Barpak region, meeting a number of welfare pensioners en route.

During the visit they were hosted in Pokhara by QGE A Team. The ex-QGE community residing in Nepal are known as “A Team”. They are an influential and close knit veterans group who are not only strongly connected with each other but also the wider society and have just marked their 85th gathering since being established.

They were also able to attend the Queen’s Gurkha Engineers Regimental Association Nepal meeting in Kathmandu where General Wardlaw was delighted to be able to present a Perowne Trust Scholarship on behalf of the QGE Regimental Trust.

The Perowne Trust is a charity set up by the QGE Regimental Trust to advance the education of young persons (in particular children of serving or retired Gurkhas from the Brigade of Gurkhas) by the provision of 18 -20 annual grants or scholarships for engineering and allied studies, to students who are attending higher education at a suitable institution in Nepal.