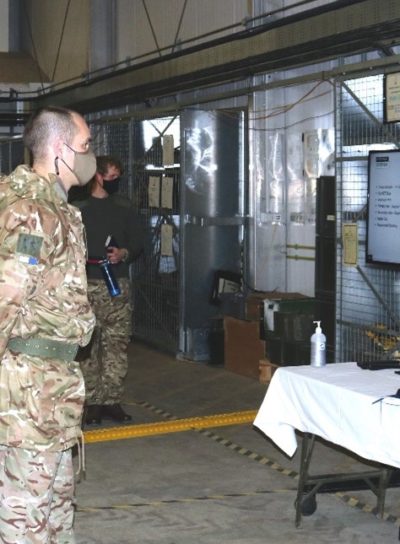 Commander QG SIGNALS started his visit from Gurkha temple at Gamecock Barracks. A short temple service was held followed by a discussion with Pandit Mr Jagdish Paudel. Major Edward Adams (Officer Commanding) officially welcomed the Commander QG SIGNALS with a flower garland and Khatta followed by a welcome brief. He then received a series of briefs on Squadron commitments and operations from the Operations Officer, Whisky Troop Officer Commanding and Squadron Foreman of Signals.

The Squadron had an opportunity to display a few detachments that support the 2* Headquarters. The Commander walked around the working areas where he received more briefs by the Detachment Commanders. The Commander was highly engaged in these briefs due to his interest in Communication systems.

After visiting the detachments, the Commander had an opportunity to talk with operationally deployed personnel over a video connection. It was a morale booster for the individuals to speak with the Commander Saheb while being away from home on operations.

The Commander thanked the Squadron for all the effort that had gone into the visit and their ongoing work.