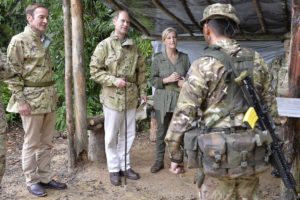 Their Royal Highnesses were in Brunei representing Her Majesty Queen Elizabeth II at His Majesty the Sultan of Brunei’s Golden Jubilee Celebrations.

While there, they took the opportunity to pay a visit to the UK’s only permanent military post in the Far East.

Their Royal Highnesses were flown into a rain-sodden jungle by helicopter. After donning standard army attire, they set foot in the dense undergrowth, guided by soldiers from 2 The Royal Gurkha Rifles (RGR), with birds shrieking as the humidity hit 75 per cent. 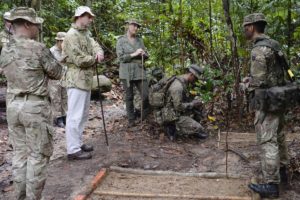 The Earl and Countess were first shown how the Gurkha troops track enemy combatants in the jungle through a combination of footprints and other tell-tale signs such as disturbed leaves and broken twigs. Their Royal Highnesses then walked a narrow, rocky path before seeing how the Gurkhas trap wild animals and birds for survival in the jungle and learning how the Nepalese soldiers build shelters, find and filter water as well as fuel for fire.

The Royal jungle tour finished with a cooking demonstration by the Gurkhas. Prince Edward and Sophie sampled fruit plucked from nearby trees and talked to Nepalese soldiers about their experiences serving Queen and country. These include eight tours of Afghanistan between 2003 and 2016 as well as other trouble-spots across the world such as Sierra Leone, Bosnia, Kosovo and East Timor.

Captain Ranjan Badgami of 2 Battalion The Royal Gurkha Rifles said: “It was such a privilege to meet Their Royal Highnesses and show them a little of how we survive and thrive in the jungle. We are taught from a young age in Nepal how to build shelters and find food and water in the wild. My troops are very happy to bring these skills to the British Army, as well as learn new ones, as we continue our forefathers 200 years of service to the Crown.” 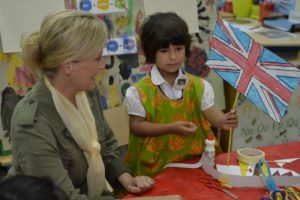 Before going into the jungle, the Earl and Countess of Wessex visited Hornbill School, attended by 350 children of BFB military personnel, where they played with pupils in a classroom and unveiled a new playground.

Lieutenant Colonel Jamie Murray RGR, Commander British Forces Brunei, said: “We are extremely proud to have hosted Their Royal Highnesses today. The UK-Brunei defence relationship is close, strong and enduring as demonstrated by this visit. As the only significant permanent UK military presence in the Asia Pacific region, it was a real boost to our garrison and wider military community to host the Earl and Countess of Wessex.”