“Getting to the top is optional, getting back down is mandatory,”

On 15 May 2017, the Brigade of Gurkhas made history when three serving Gurkhas reached the summit of Mount Everest. Not only were they the first from the Brigade to be successful in climbing the highest mountain in the world, but with their Sherpa climbing partners, and in an unprecedented move in recent Everest history, they fixed the ropes on the route to the summit, thereby opening the mountain for the rest of the climbers. They were the first climbers to stand on the summit of Everest from the South side (Nepal) this season.

“This was a truly unique collaboration of Sherpas and Gurkhas working together for success on Mount Everest — their mountain, in their country,” said deputy expedition leader Major Andrew Todd MBE.

On 16 May 2017, a further team of 10 Gurkhas successfully summited the mountain.

Expedition chairman, Brigadier Ian Rigden, said: “This is electrifying news. The aim of the expedition was to place a serving Gurkha on the summit of Mt. Everest for the first time. That the team had achieved this by placing 9 Gurkhas and 4 British team members on the summit is a magnificent achievement. They have made history. Their success is due to hard work, self-belief, true teamwork and outstanding team leadership. I specifically highlight Major Dick Gale and Major Andrew Todd, without whom this would not have been possible.

The 2017 Everest season has been marked as one of the most difficult in recent years due to difficulties in forecasting the weather, which were often conflicting, with the trend that any potential weather windows were short and marginal at best. Efforts from the official rope-fixing team had repeatedly stalled at the South Col and The Balcony (around 8,500m high) and there was no indication when the next effort would be made to fix the route to the summit.

With a narrow window on the horizon, a new summit fixing team was assembled, comprising three members of the Gurkha team, plus their Sherpas, and Sherpas from fellow Briton Tim Mosedale’s outfit and Garret Madison’s US-based Madison Mountaineering outfit. They headed up the mountain and after a gruelling climb, itself an incredible feat of endurance, finally managed to reach the summit at lunchtime on Monday 15 May, opening the way for the rest of the Gurkha team and other aspiring Everest climbers who had been waiting patiently for weeks at Base Camp.

Six-time Everest summiteer and widely respected Everest expedition guide Tim Mosedale said of his own team’s summit success: “This wouldn’t have been possible without the tremendous effort of the fixing team and the plan that was composed by the Gurkha team. The key element of this was the willingness and strength of the team [of Gurkhas] who forged ahead. They worked relentlessly for the benefit of all the climbers and expeditions here at Everest Base Camp. If the route hadn’t been put in this time, then the next weather would have been another wasted summit opportunity.”

A spokesman for the Adventure Consultants expedition team concurred, on 15 May 2017: “The summit gate is open — congratulations to the Gurkha team and their Sherpa collaborators who fixed ropes to the summit of Everest today. Great job guys. This paves the way for others.”

After their summit success, the last members of the team made it back safely to Base Camp on Thursday 18 May 2017, after a treacherous and horrific descent in marginal conditions, marked by warming temperatures triggering numerous avalanches, serac falls and the collapse of a snow bridge under one of the team members.

“Climb if you will, but remember that courage and strength are nought without prudence, and that a momentary negligence may destroy the happiness of a lifetime. Do nothing in haste; look well to each step; and from the beginning think what may be the end.” — Edward Whymper

Everest tragedy: the deaths of Ueli Steck and Minbahadur Sherchan

The path to the summit and back has not been an easy one, and over the past two months the team has had to deal with numerous challenges, not least the recovery of the body of world-famous Swiss climber Ueli Steck, as well as the death of ex-Queen’s Gurkha Signals Minbahadur Sherchan, who died aged 85 in the Gurkha team’s Base Camp.

As some members of the Gurkha team descended from Camp 2 at the end of their first acclimatisation rotation on the mountain, they came across the body of Ueli Steck, who had fallen on a solo climb on the Nuptse face. With compassion, respect, professionalism and exemplary leadership, they spent two hours recovering Ueli Steck from a dangerous part of the Western Cwm and organised the helicopter evacuation of his body from the mountain.

Ueli Steck was attempting to make history by summiting Everest via the notoriously dangerous Hornbein Couloir and then to complete the never-before attempted traverse from the summit down to the South Col and along the ridge to the summit of neighbouring Lhotse. Famous for his super-human speed records on the Eiger and Annapurna, he was at the pinnacle of modern mountaineering. Seemingly indestructible, his death was a huge shock for the team, everyone at Base Camp and in the wider climbing community.

A week later, ex-Gurkha Minbahadur Sherchan, who was attempting to become the oldest person to climb Everest, after his record set at the age of 76 in 2008 was broken, died in the arms of fellow Gurkha soldiers at the team’s Base Camp. Please see the website www.gurkhaeverest2017.co.uk for the team’s moving tribute to the great Minbahadur.

The team has made history in the finest tradition of the Brigade of Gurkhas — it is a truly tremendous achievement.

“It’s not the mountain that we conquer, but ourselves.” — Sir Edmund Hillary 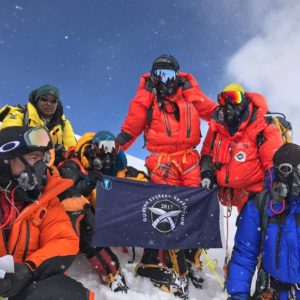 Three members of the Gurkha Everest Expedition 2017 team reached the top of Everest on Monday 15th May 2017, they were part of a team of 14 becoming the first to scale the world’s tallest peak this year.

“They made it to the summit at 1:15 pm,” said Gyanendra Shrestha, a Tourism Ministry official. This is the first time that serving Gurkha soldiers have reached the summit.

The Gurkha Everest team has sent this spectacular footage of their first acclimatisation rotation on Everest. It gives a great insight into both the beauty and the dangers they encounter on the route.

The team has completed the first acclimatisation rotation on the mountain, successfully reaching a high point of Camp 3 at 7,200m on the Lhotse Face. The team has acclimatised well so far and will descend further down the Khumbu Valley tomorrow for a few days’ rest and recovery at lower altitude in preparation for their return to Base Camp, at the weekend, ahead of the summit attempt.

In 2015, the Brigade of Gurkhas selected a team of 16 serving Gurkha soldiers who would attempt to summit Everest in celebration of 200 years’ service to The Crown.

On 25 April 2015, as the Everest team made their first acclimatisation rotation on the mountain, a catastrophic earthquake hit Nepal, bringing chaos and destruction to the Gurkhas’ homeland.

Large parts of the country were destroyed, devastating the lives of the Nepali people. On Everest, a huge avalanche swept through Base Camp, flattening everything in its path. Eighteen people were killed and the Gurkhas’ base camp manager, Captain Buddhi, received a bad head wound.

The majority of the team were stranded at Camp 1 (6,000m) on the mountain. The earthquake had destroyed the route back down to Base Camp, making evacuation by helicopter the only way to get off the mountain. The team sat tight for several days at Camp 1, while the injured and dead were evacuated from Base Camp. When that mission was complete, the team coordinated the helicopter rescue of 120 climbers and Sherpa from Camp 1 back to Base Camp. In April 2017, the team will return to Everest to finish what they started in 2015. 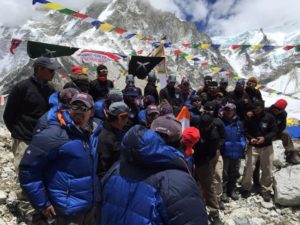 The 2017 Gurkha Everest Expedition team comprises serving soldiers from across the Brigade of Gurkhas. Their initial attempt to climb Everest in 2015, as part of the celebrations to mark 200 years’ of Gurkha service to The Crown, was brought to a halt when the Nepal Earthquake struck on 25th April 2015.

We intend to keep you posted and up to date with this mission with the team sending back images and video as they make their up the mountain.