Despite the commitments of Academy, the Gurkha Coy (SITTANG) conducted Exercise PURKHA HARUKO BIRATA (Ancestors’ Bravery) a Battlefield tour over the period 22 – 24 Feb 2013.  A total of 46 members from the GC (S) and Sandhurst Support Unit/Academy HQ took part on this exercise.  Most of us know how and where our forefathers fought but did we ever understand our ancestor’s history? So, to really understand our forefather’s history, we went on a battlefield tour for three days to France and to Ypres, Belgium on 22 February 2013.  We departed early in the morning from Sandhurst to Folkestone by coach and then to get to France, we took the Euro Tunnel.  It was my first experience to cross using the Euro Channel Tunnel.  The battlefield tour was organised by Captain Dillikumar Rai 2 RGR.

Day 1.  On arrival we made our way to our respective hotels, hotels Talbot and Belfort.  Then we went to our first stand which was the Neuve Chapelle, Indian Memorial.  The tour guide gave us an excellent brief on the battle and on how the war was fought by showing demonstration stands on the ground.  After the brief we took a quick tour around the area and the memorial ground.  Next we went to the main event of the day which was visit to the Menin Gate.  We took part in a small remembrance ceremony by placing a wreath to pay respect to our forefathers who fought in the First World War.

Day 2.  On day 2, we went to Hill 60 where we saw the big crater made by a massive explosive as part of the tunnelling operations to take over the hill from the Germans.  The 2nd stand was the Essex Farm, Dressing Station where the main RAPs were based.  The place is still standing but most of the area has gone as the years went by.  Just beside the base is the cemetery where the dead were buried and laid to rest.  The 3rd stand was to the Vancouver Corner, the Canadian Memorial, where the first use of poison gas was used on 1st Battle of Ypres.  There the difficulties faced by those unprepared for chemical warfare and the courage & discipline shown by the Lahore and Meerut Divisions were explained to us.  The 4th stand was to the Langemark German Cemetery, where a couple of Pillboxes are still intact and where the interlocking arcs of fire, can be seen.  The 5th stand was to the Tyne Cot Cemetery and Memorial.  It was here where we learnt a lot about the war and the equipment used during First World War.

Day 3.  We made a visit to the Talbot House which was both a museum and a hotel.  Talbot House was long used by the soliders where they could talk and sleep in peace, a place very much like home for soldiers, at the time of war.  The house was an interesting place and we could see some of the things used still in good condition and very well preserved, even after a very long time.  We were also shown a video on how the soldiers used to entertain themselves in the house.  There was one particular video I liked very much where an old woman was interviewed in which she mentioned Gurkhas.  She said “The Gurkhas are polite and fearsome soldiers but they cut off the enemy ears with their Khukuri and place it in their bag to keep it as a souvenir”. 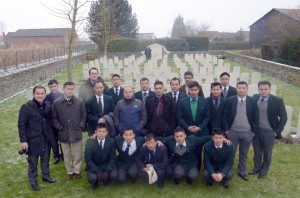 ished with a visit to the last stand of our forefather’s (Gurkha) cemetery.  We recalled things that we had only heard about, of how our forefathers fought and gave their lives for our better tomorrow.  We have shown to the world to this every day that we Gurkhas are brave and courageous and still keep our reputation of “Kaathar hunnu bhanda marnu ramro (Better to die than live a coward)”.  It was an extremely successful tour, and all the participants benefited immensely from it, particularly by understanding the nature of warfare in the WW1 and the ultimate sacrifice of the lives that our forefathers have given in the past for our better future.  Albeit, the weather was utterly cold,  we all thoroughly enjoyed the visit and learnt so much about the battles that were fought in WW1.