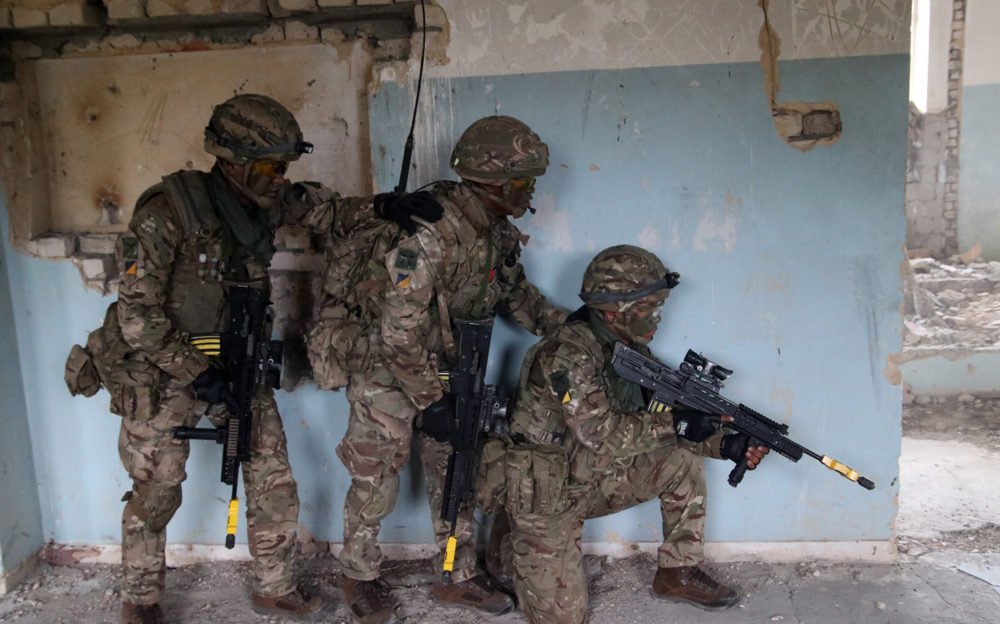 As the ramp lowers at the back of the A400, the soldiers of 28 Squadron 10 Queen’s Own Gurkha Logistic Regiment (QOGLR) are met with a wave of dry heat as they descend onto the runway.

In the distance, an orange haze settles on the hilltops surrounding Tbilisi, the capital of Georgia, as the sun goes down on their first day in a new country. More than 130 soldiers and officers deployed to the South Caucasus on a biannual NATO exercise, Exercise NOBLE PARTNER, saw the UK operate alongside their counterparts from Georgia, USA, France and Poland: a key piece of defence engagement designed to demonstrate the strength of Georgia’s partnership with NATO.

10 QOGLR provided 28 Squadron as a repurposed light role infantry company, alongside a similar sub-unit from the Georgian Defence Forces, forming a Multinational Battalion. Within the UK company were QOGLR Drivers, Suppliers, Communications Specialists, Petroleum Operators, LAD Craftsmen and GSPS Clerks who had all spent the best part of six months developing their infantry skills and tactics in order to deploy as Riflemen. They were joined by various attachments, including a section of Assault Pioneers from The First Battalion, The Royal Gurkha Rifles. Their preparation culminated in a two-week isolation camp on Salisbury Plain in August – the first of its kind for a sub-unit in the British Army since the COVID-19 pandemic began – before they departed from RAF Brize Norton. 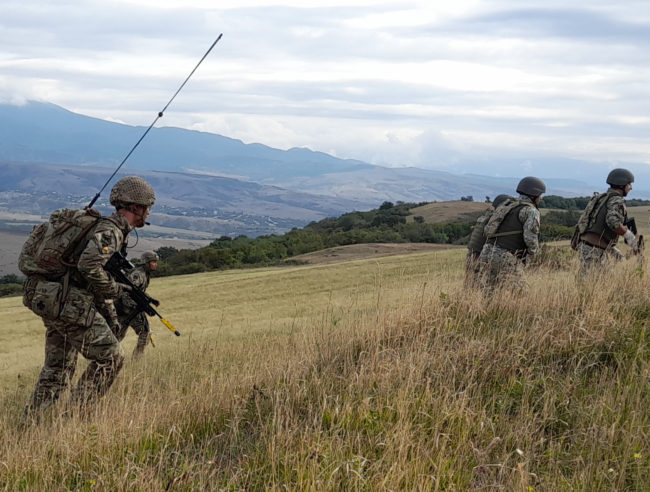 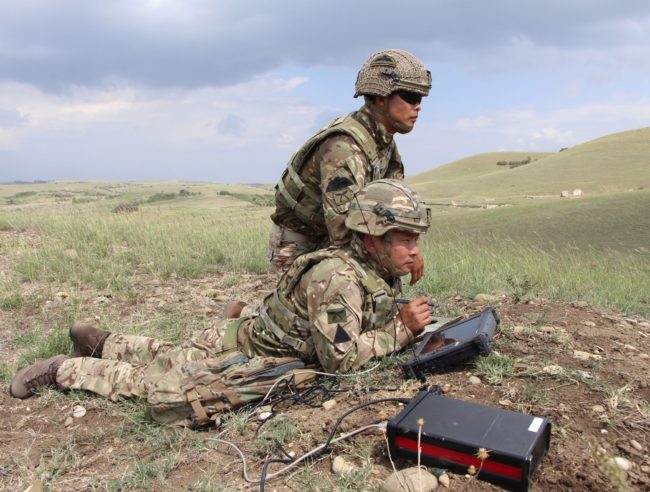 The calm of their idyllic sunset entrance into the country did not last long: within twenty-four hours Maj Tony Brazier and WO2 Yam Gurung led the company on a parade for the Multinational Brigade, attended by Georgian Prime Minister Giorgi Gakhari, who declared Exercise NOBLE PARTNER 2020 to have begun. What followed was a week of progressive Live Fire Tactical Training led by Warrant Officer Class Two Chakra Rai, a 48-hour FIBUA exercise developed by Sergeant Niraj Gurung in a disused Russian military camp alongside Georgian infantry, and a final 4-day FTX near Norio, a settlement to the north, only 60 miles from the disputed zone of South Ossetia, also alongside Georgian infantry, engineers and anti-tank troops. The relentless heat and arid, rolling hills of the Vaziani ranges; the stark Soviet architecture of the FIBUA environment; and the unforgiving slopes of the mountains surrounding Norio: all provided an exciting and charged atmosphere for the soldiers to carry out their training.

Outside of their main activities, 28 Company showcased their athletic talent on the 9/11 Memorial Run, a small competition hosted by the Georgian Defence Forces and US Army. The company secured four of the five podium positions, while a combined QOGLR and RGR Pipes and Drums provided a memorable performance which was enjoyed by the hosts. On the final day of the exercise, the Georgian Ministry of Defence displayed their own musical talent in a concert attended by all exercising troops, providing a fantastic opportunity to celebrate the success of the past two weeks and one last chance for soldiers to exchange tactical recognition flashes and patches with their foreign friends. 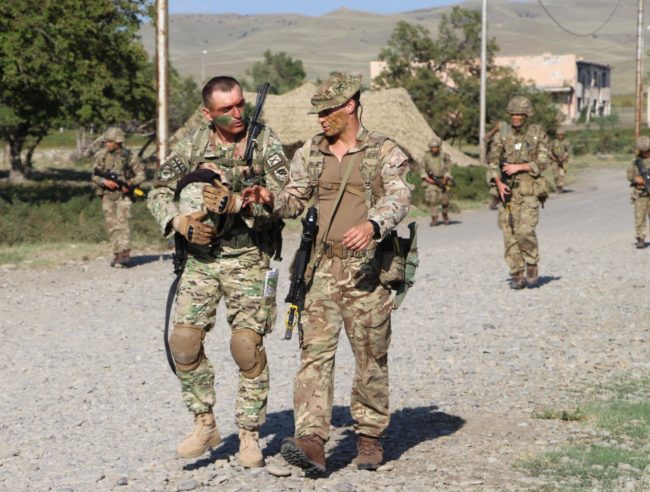 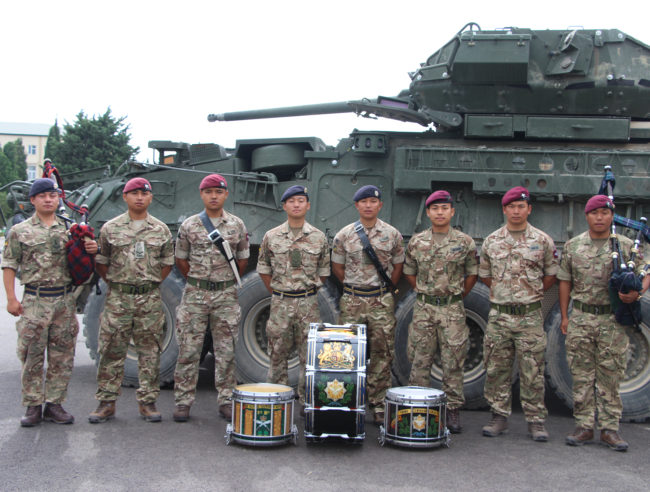 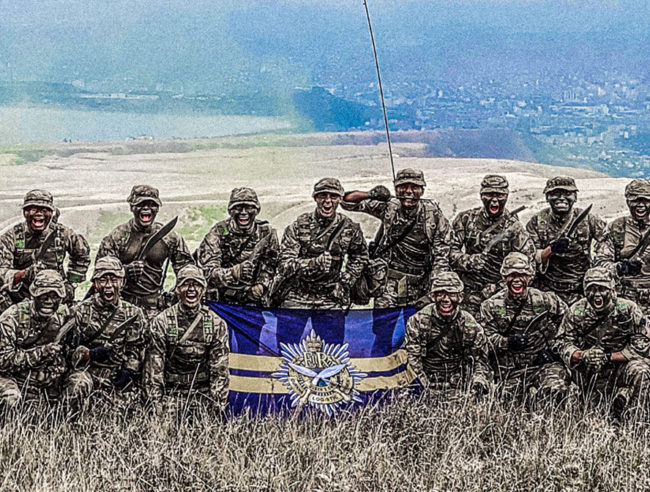 Exercise NOBLE PARTNER 20 was a truly unique experience: a logistic sub-unit took part in an overseas infantry exercise, including the first platoon-level live fire range in a decade for QOGLR; 2,800 people from five different countries joined one another in isolation amidst a global pandemic; QOGLR and RGR worked together alongside their counterparts from around the world. The exercise will be long remembered by all and showed emphatically that even if it means going outside of their trade, in a new country, away from their families and during a worldwide crisis: Gurkha soldiers can be relied upon to represent the very best of the British Army; anywhere, anytime. Hami jasto kohi chhaina.

Due to the operating environment on this Exercise, COVID-19 social distancing policies were not a requirement. The British Army soldiers on return to the UK will have applied any required isolation periods as part of our operating procedures.