This month, C (Mogaung) Company deployed to Cinque-Port Training Area for Exercise OLIVE GURKHA as part of the preparation for Exercise OLIVE GROVE in Jordan. The exercise consisted of a week of build-up training to shake the dust and readjust from a Force Protection focus back to conventional war fighting during some of the hottest weather in UK records. 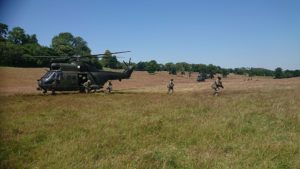 The exercise took the us back to basics, beginning with Section Attacks, with a focus on slow time mechanics and developing the complexity and increasing the pace of the serials. In addition, the ground for the exercise was carefully chosen to best replicate the open nature and sporadic distribution of cover that C Company will have to adapt to in Jordan. It provided a great opportunity for Section Commanders to take ownership of their Sections, consolidate their Standard Operating Procedures (SOPs) and with an emphasis on conducting attacks with coherent control measures to ensure safe practice. It also enabled the Junior Leadership Cadre (JLC) to step up and experience the demands of Section Command, providing invaluable experience.

On the second day of the exercise, we benefited hugely from the emphatic support of the Puma Force based at Royal Air Force Benson, whose pilots had worked closely with Hamid Karzai International Airport (HKIA) Force Protection Coy as part of the Taipan Air Detachment during Operation TORAL 7. The Squadron provided two Pumas to support the exercise, enabling all three Platoons to practice the tactical embarkment and disembarkment from an airframe that mirrored the Blackhawks that the Coy will employ in Jordan. For many it was their first opportunity to experience the gut wrenching manoeuvres that the Puma pilots were so keen to demonstrate, replicating low-level tactical flying.

Building on the foundations of Section Attacks, the Platoons moved on to Offensive and Enable Actions at Platoon level, beginning with the Advance to Contact and culminating with a Platoon Ambush. The exercise saw 9 Platoon execute a night time Advance to Contact, requiring the application of each Rifleman’s Helmet Mounted Night Vision System and their Laser Light Module (LLM) in order to identify and target enemy positions. It further developed the Platoons understanding of how to employ the Infra-Red (IR) Flood and LLM IR Laser as control measures during night-time operations.

The final day of the exercise saw the Platoons complete a formal Orders process for a Platoon Ambush, with the production of models and delivery of ground briefs; all constructed and delivered by the JLC wallah.