Exercise TIGER HIMALAYAN SAPPER was a 3 Royal School of Military Engineering Regiment (3 RSME Regt) Level 3 Adventurous Training expedition conducted in the world famous Annapurna Circuit in Nepal, from 07 to 27 Feb 13.  The Annapurna circuit marries natural grandeur, cultural immersion and relative luxury in a union found nowhere else in the trekking world.  The expedition comprised of trekking, mountain biking, rafting and cultural visits.  The aim of the expedition was to develop team cohesion, leadership and courage in a challenging situation amongst the instructors and permanent staff of the Regiment.  The Expedition was led by Captain Yambahadur Pun and seconded by Cpl Sangharsha Rai. The preparation for an expedition of this scale was immense.  After over a year of planning, on 07 Feb 13, 15 members (11 x British and 4 x Gurkhas) including the Commanding Officer of 3 RSME Regt, Lt Col JER Fernandes MBE deployed to Nepal.  After an exhausting journey and a long transit stop in Doha, Qatar, the group finally arrived in Kathmandu on the 08 Feb 13.

Sat 09 Feb 13 started with a British Embassy brief on the current political situation, threat and security.  It was followed by the senior guide: Khil Thapa’s (Ex-Gurkha Engineer) admin brief.  Further Altitude Mountain Sickness (AMS) training was also conducted.  The members of the group were very excited and enthusiastic although it was a bit of a cultural shock for our British colleagues to experience the nuisance crowds and traffic of Kathmandu!  Early in the morning of the 10 Feb 13 the road journey started from Kathmandu.  The thrilling experience of driving on a dangerous narrow dirt track road along the cliff face from Besisahar to Chamje cannot easily be erased from the memory.  The Tea house at Chamje was surprisingly pleasant and everybody was now eager to start the trek.  The epic journey of the Annapurna Circuit trek started on 11 Feb 13 from Chamje along the River Marsyandi valley, surrounded by five kilometer high peaks.  The next day we passed huge masses of schist, granite and sandstone which rose on either side of us daubed with green moss and lush vegetation.  The weather stayed wonderful with dry and sunny spells throughout the day, which allowed us to enjoy the beautiful view of snow covered mountains.  We also caught the first glimpses of Annapurna 2 and 3, gasping each time at the sharp angle at which we had to hold our heads to look up at them. The evenings were generally spent eating Nepalese style dal-bhat and curry which surely helped the group to refuel and relax.

After 4 days of trekking, we finally arrived at Manang (3540m), a landmark town for the trekkers where they often stay over an extra day to acclimatise.  The Tea houses were in limited operation due to it being the low tourist season.  By then, we had a few members suffering with the early symptoms of AMS and niggling problems which forced us to stay in Manang for 2 days.  The weather was bitterly cold and the cloud covered almost the whole mountain range.  On the seventh day of the trek the weather started to improve with some most awaited sunshine.  We advanced our journey towards Yak Kharka and then to Thorung La Phedi for the next 2 days before hitting the final objective the ‘Thorung La Pas’.  At this point, some were feeling the mild effects of AMS but all of the group members recuperated throughout the night.

Wed 20 Feb 13, at 3:30am, the group assembled after a forced breakfast and all were determined to strike the final objective knowing that the day was going to be challenging and long due to the weather conditions and altitude effects.  The team pushed through the thin air, frustratingly slow in fresh and deep snow on the paths.  The crossing was by far harder and more difficult than expected, but finally, we reached the Thorung La Pas (5416m) at midday.  At the top there was joy, a sense of achievement and satisfaction of success was very evident in each member.  Soon, after taking the obligatory snap shots and catching our breath back, we had to start our descent in order to use the remaining daylight and to avoid cold injuries.  The downhill section to Muktinath became another hurdle due to the slippery and loose path.  The difficulty was further exaggerated by our drained energy but the team managed to make their way to Muktinath by dusk.

Our physically shattered bodies were renewed in spirit after we spent the night in the Bob Marley Hotel.  But to our disappointment, there was no relief from trekking and we had to walk another day when they were unable to transport the mountain bikes from Jomsom.  Despite the aching feet, the beautiful view of Kagbeni and trekking along the almost dry river was mind blowing.  The bustling town of Jomsom was another fascinating experience before we got on the bus to Tatopani.  Another road journey on rough and dangerous terrain along the Kali Gandaki gorge could not be avoided.  We arrived late in the evening but the amazingly warm and pampering hot spring water bath was a pleasant finish to the amazing trek.  The next day began with mountain biking past beautiful scenery and the fast dirt trails and rocky tracks were thrilling to ride.  After a lunch stop at Beni, we made another road journey to Naudanda (2 hours drive) for the final leg of the mountain bike to Pokhara.  The next day started with a doko (basket) race; a famous and tough test for the Gurkha recruit selection.  To round off another excellent day, all of the tired and hungry members were humbly treated to a true Nepalese style feast at My aunt’s house. 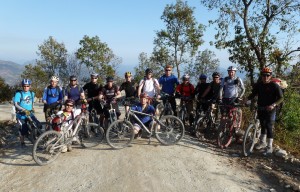 The group left Pokhara with good memories ready for the final assault on the Trisuli River on the 23 Feb 13.  The river course was challenging at times with some thrilling rapids.  The overnight stop by the river bank and the evening barbeque was something enjoyed by all of the group members.  On completion of the rafting, we headed to Chitwan National Park, a World Heritage site.  The diversity of ecosystems, Churia hills, flood plains of the River Rapti and a glimpse of wild rhinos was another mind blowing experience.  After an enchanting elephant ride on the morning of 25 Feb 13, the group recovered to Kathmandu.  The tour of a great Buddhist temple Syambhunath (known as the monkey temple) and Hindu temple Pashupatinath concluded the expedition before the members rushed to do some last minute souvenir shopping.

The exercise personnel were pushed to the limit and the expedition tested courage, determination, team cohesion and leadership in the Himalayan ranges.  Nevertheless, the unpredictable risk of AMS could never be underestimated but it was the careful planning and acclimatisation that was key to our success over the mountain.  The expedition took every opportunity to see such a diverse landscape; mountainous regions, hills and lowland plains all crammed into the tiny country of Nepal.  A once in a lifetime opportunity and experience with so many high and lows that will remain in our memories forever.