Aged 18 he enlisted in the King’s Royal Rifle Corps — the 60th Rifles. He was commissioned in 1943, and joined the 2nd Battalion (2/60th) for the Normandy landings the next year. He reached Juno beach on the second day of the offensive.

He commanded a platoon of a motor battalion equipped with lightly armoured half-track vehicles whose job was to provide close infantry support for the tank regiments as they drove the Germans back across northwest Europe.

He saw many of his colleagues killed, some right beside him, and was wounded in the thigh near Caen. After that he was evacuated to England, but returned to the front line five weeks later. He was wounded again, this time in the shoulder, but was back in the fray after three days in a field hospital.

On 20th October 1944 Bramall led a reconnaissance patrol into a dense wood laced with mines. When the patrol ran into a German outpost, Bramall attacked with his Sten gun and grenades, wounding two Germans, taking one prisoner and putting seven others to flight before returning with detailed information about the German positions.

He was later awarded the Military Cross by Field Marshal Montgomery, but he was fortunate to be alive. A week after that patrol he led another and stepped on a mine in a ploughed field. It failed to explode. 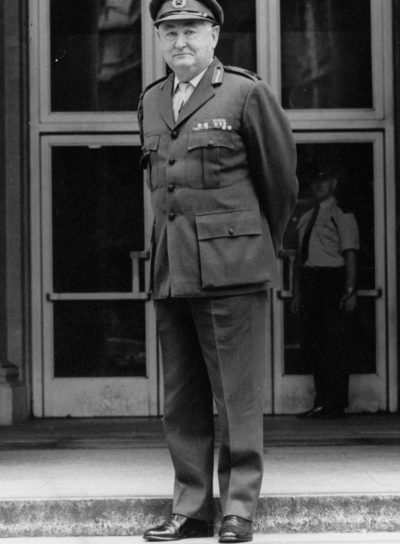 When the European war ended Bramall qualified as a parachutist and was deployed to the Far East, but Japan surrendered before he could see active service there. He spent a year administering occupied Japan and visited the ruined city of Hiroshima. He declined a place at Christ Church College, Oxford, and instead joined the Military Operations Directorate at the War Office. In London he met Avril Vernon, a brigadier-general’s daughter, and they married in Winchester Cathedral in 1949. They had two children: Sara, who later qualified as a nurse and worked at Great Ormond Street Children’s Hospital before marrying a distinguished neurologist; and Nicolas, who runs a garden design business.

In 1952, aged 29, Bramall passed into the Staff College at Camberley as the youngest man in his year. That was followed by postings to Egypt and Libya, where he led an expedition 650 miles across the Great Sand Sea to Kufra to practise navigational skills, before returning to Camberley as an instructor.

By 1963 Bramall was rising fast. He was hand-picked to help Lord Mountbatten, then chief of the defence staff, to merge the army, navy and air force ministries into a single Ministry of Defence. The task required charm, tact and guile because the three service chiefs were loath to cede power to Whitehall. He was appointed OBE for his work.

From Whitehall he departed, as commander of 2nd Green Jackets, for active service in Borneo where Indonesia’s President Sukarno was ordering cross-border attacks on the former British protectorates of North Borneo and Sarawak. Bramall’s battalion served two successful four-month stints in the jungle, and he was mentioned in dispatches. He also wrote a pamphlet, Leadership the Green Jacket Way, about trust between officers and men, which remained in use for several decades.

During another stint at the Staff College as an instructor he produced a series of instruction manuals on land operations. In 1967 he was given command of 5th Airportable Brigade on Salisbury Plain, followed by a year at the Imperial Defence College in 1970. There he demonstrated his capacity for forward thinking with a paper called The Application of Force in which he predicted the emergence of terror as an instrument of political persuasion, and the restraining influence of public opinion on military action as western societies became more concerned with maintaining affluence than righting wrongs.

In 1972 Bramall was appointed general officer commanding 1st Armoured Division in what was then West Germany with the rank of major-general. This was at the height of the Cold War, and his mission was to counter any thrust by Soviet tanks across the North German Plain. His battle plan drew heavily on tactics that he had seen the retreating German forces use to great effect at the end of the Second World War, including the skilful tactical use of woods and hamlets to break up and delay attacking enemy armoured formations.

It was a mark of the man that Bramall, unlike his predecessors, took the trouble to learn German and liaise closely with his West German counterparts. He was knighted in 1974.

Two years in Germany were followed by two more as commander of British Forces in Hong Kong, where his biggest challenge was to reduce the size of the garrison while simultaneously persuading the colony’s government to pay more of its costs.

His tenure was also marked by the arrival of the first Vietnamese boat people after the fall of Saigon in 1975. The first batch of 3,400 were brought ashore by a Dutch container ship just as the Queen arrived on a royal visit, and a wall of cargo containers was hastily erected to keep them out of sight. “We shouldn’t make them feel too comfortable, you know. Otherwise we’ll be receiving a boatload every week,” Bramall remarked.

In 1976 he returned to London to become a four-star general and commander-in-chief of UK Land Forces. It was a time of social strife, with Jim Callaghan’s faltering Labour government battling rampant inflation and rising trade union militancy.

The army, already stretched by deployments in Northern Ireland, was caught in the middle when 20,000 servicemen had to step in with their antiquated Green Goddess military fire engines during the firefighters’ strike in the winter of 1977/8. Even more invidious, the striking firefighters were earning more than the soldiers even without the pay rise they were seeking.

Bramall toured the country to maintain the morale and discipline of his men, but raising servicemen’s pay to stanch an exodus that was beginning seriously to undermine the military became one of his priorities after he was promoted to vice-chief of defence staff (personnel and logistics) in 1978.

In that capacity Bramall displayed his growing political guile by giving an off-the-record briefing on servicemen’s pay to a wire service journalist hours before Callaghan was to address the issue in the Commons. The opposition seized on the figures. The prime minister was blind-sided and ordered an inquiry into the “malicious” leak. Bramall was named as the culprit, but he secured the pay award he wanted and his career did not suffer. He was soon appointed chief of the general staff, or professional head of the British Army.

He was in that post when Argentina invaded the Falklands in 1982. Bramall was a voice of caution. He did not oppose the dispatch of the task force, but fretted about Britain’s lack of air superiority. “Air superiority is, after all, one of the principles of war and we have not yet achieved it,” he warned Margaret Thatcher’s war cabinet shortly before the first troops landed. His concern was borne out by the loss of ships to air-launched Exocet missiles and the Argentine bombing of the landing ships Sir Galahad and Sir Tristram at Fitzroy.

When victory was secured, he flew to Ascension Island to greet the returning troops. “In the years ahead when you are old men, you will be able to say, as they said after Waterloo, after Alamein and Arnhem, ‘I marched and fought and won in the Falklands, and showed the world the incomparable quality of professionalism of the British Army,’ ” he told them.

He then added, with his slightly crooked trademark smile: “No doubt you will bore successive generations of children and grandchildren into the bargain, but such is life.”

A few months later Bramall received his field marshal’s baton from the Queen and became chief of the defence staff, or professional head of the armed forces. He hoped for a period of consolidation after the Falklands, but that was not to be. Thatcher made Michael Heseltine defence secretary, setting the scene for one of the most difficult periods in Bramall’s military career.

Heseltine wanted to streamline the MoD by amalgamating various functions of the three services. Instead of consulting Bramall, who had conducted a similar exercise for Mountbatten 20 years earlier, he developed his plans in secret. He then presented them to his chief of defence staff as a fait accompli lest Bramall and the service chiefs sought to rally opposition. They did try to do that, but failed. “The trouble was, we’re all public servants and we have to do what we’re told,” he complained later to Michael Crick, Heseltine’s biographer.

British defence policy at that time rested on “four pillars” — maintaining the nuclear deterrent and defence of the UK, of Nato’s central European region and of the eastern Atlantic. Bramall, with great foresight, anticipated new threats to national security emerging from southwest Asia and the Middle East.

He argued for a “fifth pillar” — a dynamic, proactive, intelligence-led foreign policy to identify and avert those threats, backed up by appropriate military preparations. He failed to persuade ministers to pursue the idea, but was amply vindicated by the slew of regional conflicts that erupted after the collapse of the Soviet Union in 1991 and the subsequent rise of Islamic terrorism.

Bramall retired from the army in 1985, but not from public life. He served as lord-lieutenant for Greater London for 12 years — once accidentally burying his Garter Star in the soil at a ceremonial tree planting. He was chairman of trustees of the Imperial War Museum from 1989 to 1998, helping to establish its permanent Holocaust exhibition and the American Air Museum at Duxford in Cambridgeshire.

He sat on Marylebone Cricket Club’s committee, serving as its president, and was chairman of the International Cricket Conference (ICC, now the International Cricket Council) in 1988-89. In that role he helped to resolve a growing controversy over “rebel” cricket tours to apartheid South Africa. The ICC ruled that cricketers who continued to play in that country should be banned from Test cricket for five years, but that the ban should not be retrospective. After apartheid collapsed, he helped to bring South Africa back into the cricketing fold.

Bramall, ennobled in 1987, was also an active crossbench member of the House of Lords. For many years he spoke trenchantly on military matters, never more so than before the Iraq war. In a letter to The Times six months before the US-led invasion of 2003, he wrote that “the very display of massive, dynamic US activity . . . provides one of the mainsprings of motivation for terrorist action in the region, and indeed over a wider area.

“Far from calming things down, enhancing any peace process and advancing ‘the war against terrorism’, which could and should be conducted internationally by other means, it would make things infinitely worse. Petrol rather than water would have been poured on the flames and al-Qaeda would have gained more recruits.”