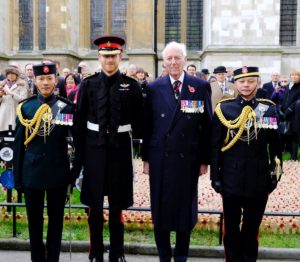 On 9th November 2017 members of the Brigade association and representatives from all the current and past regimental associations came together at the Field of Remembrance at Westminster Abbey.
The event is organised by the Royal British Legion Poppy Factory as part of the annual Poppy Appeal commemorations. Each year, hundreds of volunteers help us to plant more than 120,000 tributes across six Fields of Remembrance in the UK. Members of the public can make a Remembrance tribute to be planted in the fields, in the form of a religious or secular symbol carrying a poppy and a personal message to someone who lost their life in the Service of our country.
The Field of Remembrance was started in 1928 by Major Howson MC, the founder of the Royal British Legion Poppy Factory. Major Howson and a few disabled ex-servicemen from the Poppy Factory grouped together around a battlefield cross and with trays of poppies, invited passers-by to plant a poppy in the vicinity of the cross. Since then, the Field has evolved to include a wide range of military interests. Ex-Servicemen and Woman, both young and old turn out for the opening ceremony to pay their respects to their colleagues. 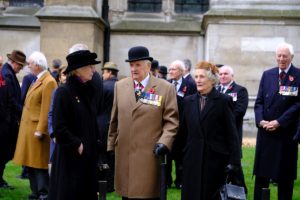 On this occasion our current Queen’s Gurkha Orderly Officers and General Garry Dene Johnson KCB OBE MC were presented to HRH Prince Henry or Wales (Prince Harry). General Johnson was commissioned into the 10th Princess Mary’s Own Gurkha Rifles in 1956. He served in Malaysia during the Malaysian Emergency. In 1981 he was made Commander of 11th Armoured Brigade. In 1985 he was selected to be Assistant Chief of Defence Staff. He moved on to be Commander of British Forces in Hong Kong in 1987 before being appointed Commander for Training and Arms Directors in 1989. In 1992 he became Commander-in-Chief Allied Forces Northern Europe and retired in 1994. He was Regimental Colonel of the 10th Princess Mary’s Own Gurkha Rifles from 1985 to 1994. 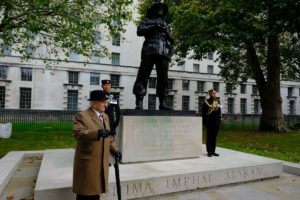 After the service at the Westminster Abbey Gardens the Gurkha party moved to the statue of Field Marshal The Viscount Slim on Whitehall and a small number of wreaths were laid as a mark of respect.
The party moved to the Memorial to the Brigade of Gurkhas on Horse Guards Avenue, Whitehall, London. This was unveiled by Queen Elizabeth II on 3 December 1997. This was the first memorial to Gurkha soldiers in the United Kingdom, and was occasioned by transfer of their headquarters and training centre from Hong Kong to London in 1997. The sculptor was Philip Jackson, working from a statue of 1924 by Richard Reginald Goulden in the Foreign and Commonwealth Office, and the plinth was designed by Cecil Denny Highton. A small service took place with Last Post performed by a bugler from the Band of the Brigade of Gurkhas and a lament performed by a piper for the Royal Gurkha Rifles.