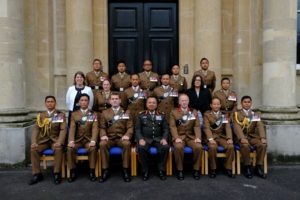 The second week in July 2017 saw an official visit to the UK by General Rajendra Chhetri, Chief of Army Staff Nepal, who took time on Wednesday 12th to visit Headquarters Brigade of Gurkhas and the Royal Military Academy Sandhurst.

Accompanied by some of his key staff including Major General Prabhu Ram Sharma , Deputy Chief of Staff and also the Nepalese Military Attaché to the UK, Colonel Pradeep Jung KC and Britain’s Defence Attaché in Kathmandu, Colonel Ian Logan, General Chhetri arrived at HQBG and was welcomed by Colonel James Robinson, Colonel Brigade of Gurkhas, before agreeing to sit for an HQ photo.

Following this he signed the visitors’ book and then was given a brief on the Brigade and its role within the British Army by Colonel Robinson after which Major Rambahadur Pun RGR, Senior Major New College Sandhurst, gave an introduction to the Sandhurst Commissioning Course.

After this, the party were joined by their spouses for a tour of Old College and a chance to meet the three Nepalese Army Cadets currently studying at Sandhurst whilst enjoying coffee in the Indian Army Memorial Room.

Prior to departure the General was pleased to present Colonel Robinson with a magnificent Kukri and book on the Nepalese Army, whilst in return Colonel Robinson presented the General with a signed copy of “The Gurkhas, 200 Years of Service to the Crown”, the book written by Major General Craig Lawrence to mark the 2015 bicentenary.

After an office call with Major General Duncan Capps, Commander Regional Command, and a visit to 10 Queen’s Own Logistic Regiment where the group were treated to a traditional Gurkha food and entertainment, Major Suryakumar Rai , Deputy Chief of Staff HQBG and Captain Ganesh Tamang, Queen’s Gurkha Orderly Officer, then accompanied the party to Windsor Castle where Colonel Duncan Dewar, the Castle Superintendent, took the party on a guided tour of the castle, introducing them to and telling some of the tales behind its history.