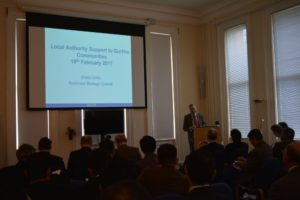 On Saturday, 18th February 2017 the Gurkha Brigade Association held its third annual Gurkha Briefing Day at Headquarters Brigade of Gurkhas, Sandhurst. The aim was to share information to assist Gurkha settlement and to provide a forum in which to share best practice.

There was a strong attendance of over 60 ex-servicemen who had travelled from many locations where ex-Gurkhas are settled with many taking the lead for their local Gurkha communities.

The programme was wide ranging and started with an update from Army Secretariat, Mr Mike Roberts, who provided an update on the annual inflation for the Gurkha Pension Scheme, explained that the case and its subsequent appeal to the European Court of Human Rights for changes to the Gurkha Pension Scheme have both been rejected by the Court and highlighted the compensation scheme for those discharged due to mixed marriage. 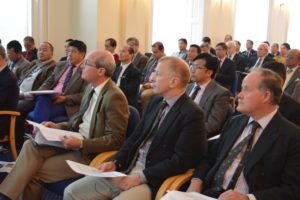 Service men and veterans getting briefed

Miss Shelia Limbu then gave an interesting account of how Rushmoor Borough Council assist with Gurkha settlement and highlighted areas of concern that Gurkha communities should be aware of and address. This was followed by an explanation of the funding available through the Armed Forces Covenant for local communities, including for integration projects.

Captain Umesh Pun MVO then briefed on the support he and his team provide for Gurkha settlement in the Colchester area which included establishing strong connections with the local authority and other bodies to gain funding, as well as his Gurkha Homes project.

Major Dudhprasad Gurung then explained how £20,000 was awarded through the Armed Forces Covenant fund to allow the Gurkha community in Maidstone to raise other funds and build a multi-purpose community centre to assist integration. 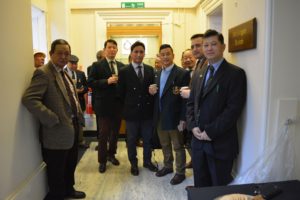 The Gurkha Welfare Trust provided an update on progress in Nepal to support earthquake reconstruction and explained the progress being made to enhance medical support to welfare and service pensioners in Nepal.

The Gurkha Welfare Advice Centre then explained some of the changes to the processing of Gurkha settlement including the importance of visiting the Gurkha Settlement Office in Kathmandu to obtain a National Insurance Number before arrival in UK, and the changes made by the Department of Welfare and Pensions to the on-line Universal Credit system.

The briefing day concluded with an Open Forum and was summarised by the President, Lieutenant General Sir David Bill KCB, who reiterated that the way to success was bottom-up application and strong connections with the local authorities to gain support and funding for any special projects. The day concluded with a curry lunch.

Presentations from the day are available below in PDF format.