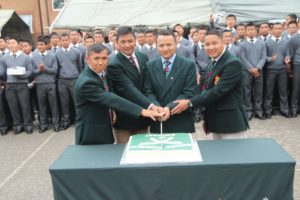 After lunch the Sungai Petani Cup basketball competition took place between the JNCOs team versus Officers and SNCOs’ team. The JNCOs team were leading by 2 scores until the last minute but the opposing team scored 2 points at the very last minute and equalised the game and the match ended in a tie. Finally the winning team was declared as the Officers and SNCOs’ team after a free shoot out.

Concurrently, the inter Platoon photo board competition had taken place. It was astonishing to look back at the training activities through the images displayed by each Platoon. The effort and innovative ideas that the trainees had come up with to make a photo board was outstanding.

Finally all trainees, staff and their families assembled at Bhanubhakta VC square and marked the Gurkha Company birthday by cutting a cake.

The Commanding Officer, Lieutenant Colonel Simon Davies, presented commendations to three members of the Gurkha Company.  He was extremely happy to announce the names and personally thanked those recipients whose contributions to the ITC was observed and valued by everyone.

Dinner was served after Commanding Officer’s address and entertainment followed in the form of spectacular cultural shows presented by the trainees.