In honour of 200 years of Gurkha service to the British Crown, a Gurkha memorial – ‘Chautara’ (a resting place for travellers on hillside trails) was  formally opened on 23 September 2013 at the National Memorial Arboretum in Alrewas, Staffordshire.  The service was attended by representatives from all UK-based Gurkha units, members from the Gurkha Brigade Associations (GBA), Gurkha Welfare Trust, Gurkha Museum and local dignitaries. 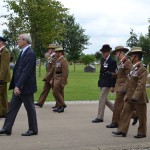 The President of the GBA, Lt Gen Sir David Bill KCB, opened the service, which was then followed by a brief dedication and blessing of the Memorial by Pandit, Lama and GBA honorary chaplain.  The Chairman GBA, Brig John Anderson led the Remembrance Service and one-minute silence was observed in remembrance of the fallen. 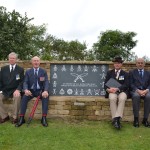 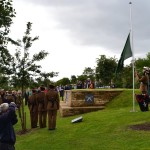 The Memorial, in the form of a traditional Nepalese ‘Chautara’, was erected as a result of two years of voluntary work by Mr Andrew Brown-Jackson and his team of volunteer workers from the Queen’s Gurkha Signals.

Further article on the Gurkha memorial is contained in the BFBS Gurkha Facebook link: http://www.bfbs.com/radio/article/gurkha-memorial-dedication-service