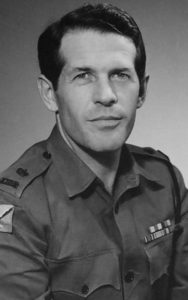 Colonel Jimmy Evans, who has died aged 94, was a gallant soldier, an astute businessman and a lifelong friend of Nepal and the Gurkhas.

In November 1943, Evans was serving as Signals and Intelligence Officer with the 1st Bn 4th Prince of Wales’s Own Gurkha Rifles (1/4 PWO GR), in the Chin Hills, south-west of Imphal. He was ordered to lead his platoon in a battalion probing attack on a feature called Pimpi about seven miles away. There was a Japanese outpost on the hill, the enemy were in deep bunkers and it was Evans’s first action.

After a night march along the ridge leading to Pimpi, there was a halt in the chilly darkness until first light. Two companies then advanced uphill. Evans was following with Tactical HQ when, suddenly, there was a burst of machine-gun fire.

Evans had emerged into open ground and was checking on field telephone wires when a group of wounded men came streaming back past him covered in blood. Just ahead of him, lying on the ground staring at the sky, was the Forward Observation Officer. He was dead. “It seemed unreal,” Evans said later.

One of the company commanders came limping back dragging a foot and said hoarsely that the “B” Company commander had also been hit. “You had better be ready to take over,” he shouted.

Evans could see men pinned down by a fence of coiled barbed wire. Whenever they moved there was a burst of machine-gun fire from the hilltop. He then saw a group of young soldiers on the left starting to run back towards him. “What’s happening?” he yelled.

One of them replied that he had heard the word to withdraw. Evans could see no NCOs and sensed that something was wrong. He shouted to them to stand their ground and loosed off a whole magazine of his sten gun in the direction of the bunkers.

The noise halted the men who turned around and, with Evans in the lead, they began to crawl under the wire. The Japanese could not depress their machine gun any further or they would have wiped out the attackers but, cunningly, they had hung tin cans on the wire and every time the men moved there was a burst of fire inches over their heads.

Evans got through the wire but, when he looked around, he saw that he was on his own. The riflemen were still stuck underneath. Very gingerly, he eased backwards, but his water bottle caught on the lowest strand of the wire and was rattling the tins. He did not dare raise his hands to free it, but straining with all his strength, it came clear.

Although he was wounded and with casualties mounting, he then assumed command of two rifle companies. By evening, the operation was called off. Evans was recommended for an Immediate MC. The citation paid tribute to his “exceptional courage, leadership and resource”.

James Morgan Evans was born on 7th October 1922 at Ambleston, Pembrokeshire, where his father was the vicar. He was educated at Christ’s Hospital, Horsham, Sussex, and then applied for a commission in the Indian Army.

He attended Officer Training School at Bangalore, India, learnt Urdu and was commissioned in October 1942 into 4 PWO GR. After a spell at the Regimental Centre, Bakloh, in the foothills of the Himalayas, where he learned Gurkali, he joined his Regiment’s 1st Bn, part of the 17th Indian Infantry Division.

In 1944, at the height of a battle near Imphal, Evans was in a fight with a Japanese infantryman when his revolver ran out of ammunition. He hurled a grenade at the man but took a rifle bullet in return and was seriously wounded. He always maintained that this probably saved his life because the casualties at that time were so high that he might well not have survived.

After Independence in 1947, 4 GR stayed with the new Indian Army so Evans transferred to the British Army. In 1950 he was posted to 6 GR and, and a year later, joined 10 GR and served in Malaya during the Emergency, gaining a Mention in Despatches.

From 1956 he held several regimental and Intelligence staff appointments before joining the British Army Staff in Washington in 1961. While he was there, he was seconded to the US Army Defense Intelligence Agency. He acted as Liaison Officer during the Cuban Missile Crisis in October 1962 and dispatched to London the telltale photographs of Soviet missile deliveries.

After an appointment in Intelligence at HQ British Forces, Borneo, he was posted as Military Attaché to Damascus during the Arab-Israeli Six Day War. From 1968 to 1970 he was British Defence Attaché, Beirut. It was his final posting before retiring from the Army. He subsequently set up an export company in London which he managed for 30 years.

He was a stalwart supporter of the Britain Nepal Society and was appointed chairman in 1987 and vice president in 1993. In 1994 he established the Britain Nepal Chamber of Commerce, becoming its founder chairman and, later, president. In 1998, his work was recognised by an award from the King of Nepal. In 1976 he brought his business acumen to the task of establishing the Gurkha Museum at Winchester and was a trustee for 35 years.

From 1989 he lived in Hampshire and enjoyed walking, gardening, village life and watching the seasons change. In the 1990s he joined the Burma Campaign Fellowship Group whose aim was reconciliation between previous enemies.

He had a friendly discussion with two Japanese veterans in London. “It interested me,” he said afterwards, “to meet these fellows who had been bitten by the same mosquitoes as bit me.”

Jimmy Evans married, in 1959, Jenifer Snow, who proved a tower of strength and support in all her husband’s undertakings. She survives him with their three daughters and a son.

Article taken from the Daily Telegraph Obituaries 8th May 2017