Gurkha Staff and Personnel Support (GSPS) celebrated its 7th formation anniversary in the presence of the Colonel of the Regiment, Colonel A D Griffiths OBE on 12th May 2018, in Aldershot.

It was a proud moment for the GSPS family as they commemorated another successful year and looked forward to the rest of 2018.

The day started with the most junior soldier reading a passage about the history of the GSPS before a birthday cake cutting ceremony took place. This was followed by the GSPS Football Cup, ladies volleyball and children’s games.

The day ended with an evening function to celebrate the 7th anniversary, the achievements and the journey. The dinner was followed by a speech from the Officer Commanding celebrating the various achievements in fields of military competitions, promotions and commendations.

With hard training GSPS objectives for the 2018 were coming to fruition; winning cups at the Force Troop Command Operational Shooting Competition in April and GSPS were crowned the Adjutant General Corps Triple Crown Challenge March and Shoot 2018 Winners on 9th May.

The march and shoot winning team was presented with a ‘Colonel of the Regiment Coin of Excellence’ by the Colonel Griffiths. Recent transferees and their families were presented with Khadas and bouquets welcoming them into the GSPS family. 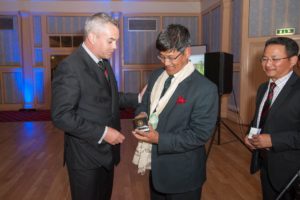 Finally the icing on the cake was the celebration and presentation of an MBE tie, miniature medal and lapel pin to Major Bijayant Sherchan for being awarded an MBE in the New Years Honours List 2018.  It was a fitting moment to bid farewell to Major Bijayant and his wife Mrs Rashmi as he leaves the Army in September 2018 on completion of his 36 years plus service to the Crown.

The entertainment phase was kick started by a magnificent display from the Queen’s Own Gurkha Logistic Regiment (QOGLR) Pipes and Drums followed by a talent show from various units. The party ended with a  DJ playing all our favourite dance tunes.

A well-deserved appreciation goes out to the event organisers, the GSPS members of 10 QOGLR (Staff Sergeant Pritam and his team) who worked in tandem with RHQ GSPS (Warrant Officer Class Two Ram and his team).

The winners of the competitions were as follows –