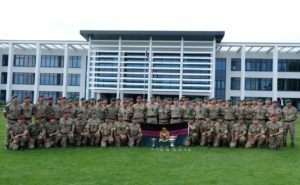 The Adjutant General Corps (AGC) Triple Crown Challenge was held at Worthy Down on Wednesday 9th May 2018. This is an annual event which promotes esprit de corps and the ‘soldier first’ ethos whilst strengthening the ties between the various branches of the AGC.

This year 136 four person teams (including nine teams from across the Brigade of Gurkhas) took part in the March and Shoot.

GSPS teams compete for the AGC March and Shoot Cup and in addition, also for the Brigade of Gurkhas Colonel Commandant’s Cup.

This year the team from 1 Royal Gurkha Rifles (1 RGR) secured the victory within the Brigade.  In addition they also secured the overall AGC March and Shoot Cup with a time of 02:05:43 hours – not only a fantastic win but also a new record as they beat the previous marker by over 9 minutes. 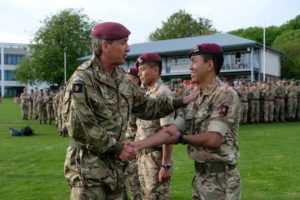 Colonel Commandant AGC, Lieutenant General James Bashall CBE, who was awarding the prizes, said he was incredibly proud to see the endurance displayed in particular by the winning team as they ran the full 12 miles.

Colonel GSPS, Colonel Andrew Griffiths OBE, was delighted to be able to attend to see the outstanding efforts of all the GSPS teams participating.   Following the Prize Ceremony, and standing alongside Colonel Brigade of Gurkhas, Colonel James Robinson and Officer Commanding GSPS, Major Narendra Kumar Gurung, he thanked the GSPS teams for their commitment and the arduous training they had put themselves through.

He also challenged the winners to retain both cups in 2019. Colonel Robinson congratulated all the teams that had taken part, re-emphasising the “Gurkha first” ethos, before encouraging all to aim for top places next year.  A big Shyabaash.

The members of the winning team (1 RGR GSPS) are: