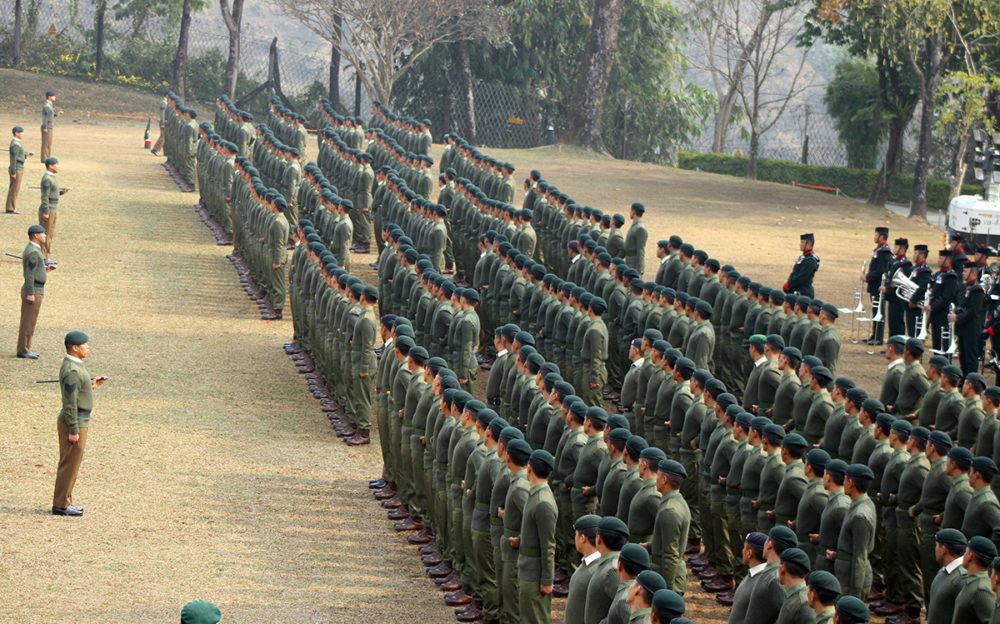 You can follow our Gurkha Intake 20 on this blog. We will be posting content, images, and video about their training in Catterick over the next nine months.

Recruit Intake 20 deployed on their first military field exercise on to the training area in Catterick in mid-March 2020. The exercise named simply as Intro Exercise 1 takes place on the backdoor training area, Infantry Training Centre Catterick.

Under the guidance of our experienced instructors, the 432 Trainee Riflemen were receiving training on basic fieldcraft knowledge. This is a fundamental element and learning requirement to become a complete infantryman. Many weeks to go but the first steps to becoming trained professional soldiers have taken place. 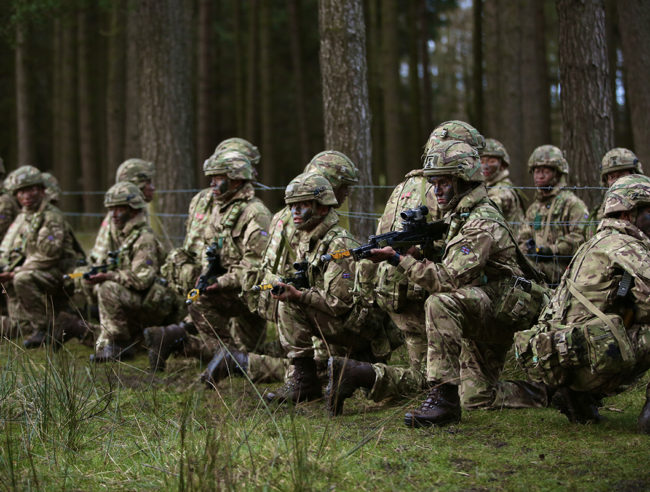 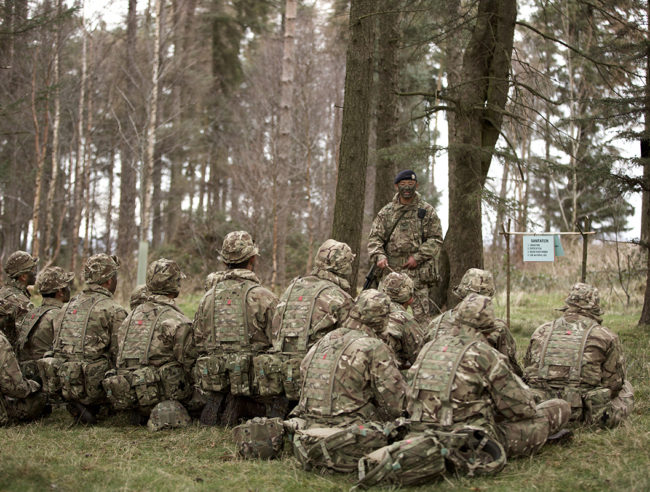 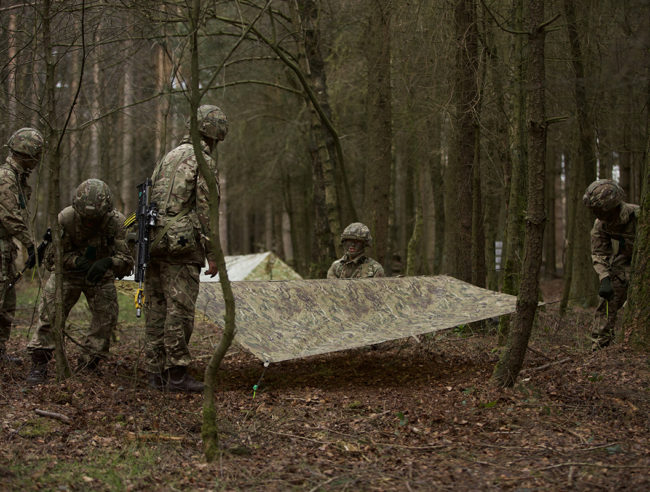 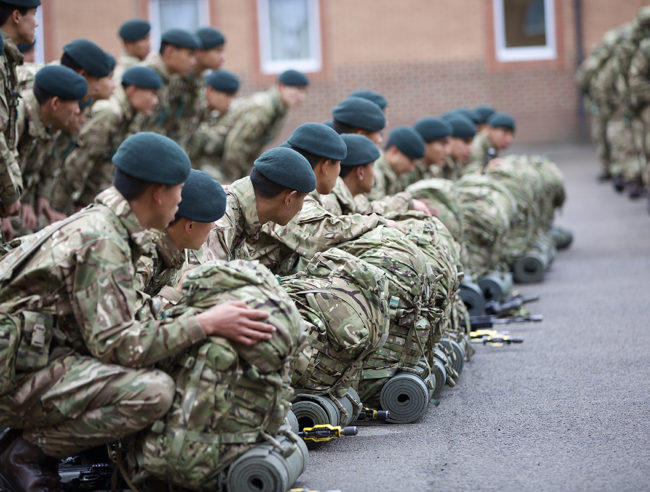 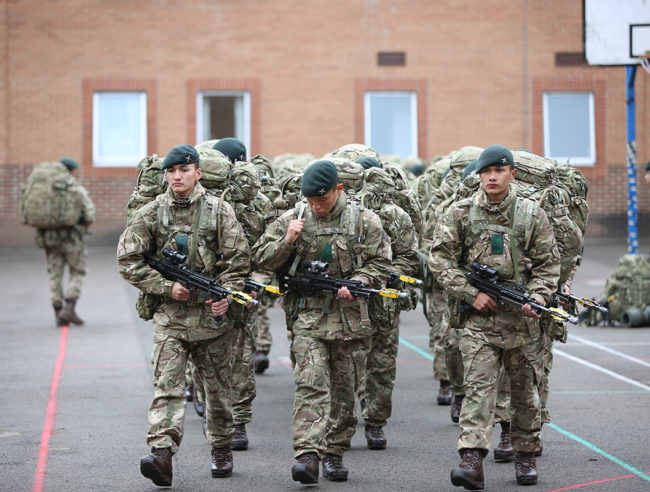 Week one new kit to explore

With unrivalled operational experience, the British Army has developed an armoury of powerful and versatile equipment supported by state-of-the-art body armour Scalable Tactical Vest (STV) and personal load carrying equipment. During week one of our recruiting phase in ITC Catterick, where we have been issued with the arrays of personal military equipment for our daily use as soldiers.

Our Gurujis explained that the multi-terrain pattern (MTP) combat clothing is designed to blend with the range of environments such as woodland, jungle, compounds, crops, grassland and arid stone. Similarly, STV provides excellent ballistic protection, while improving the comfort of personnel in a combat role. In addition, they taught us with the demonstration to put the kits together and examined individually to ensure that everyone has fitted correctly. The Virtus belt kit took some time for us to understand on how to keep all the required pouches in place though our gurujis showed us through demonstrations. They also explained individual use of the different shaped pouches which includes ammunition, utility, smoke grenade, grenade, water bottle and first aid. More importantly, they emphasised on securing our military gear. We learned about maintaining accountability for operational security, mission success and soldier overall readiness.

If an item is lost and the enemy gets his/her hands on that item, it could compromise the mission at hand or give them intelligence on the items we as soldiers use each day. Using habits and exercising the securing of sensitive items will make it possible for the soldier like us and team to operate at the top performance. Our gurujis always expect us to look after the kits while conducting to the highest standards.

Being a soldier is not easy. We are asked to do things not asked of other people. We must now learn to live by the rules of the British Army and believe in them. We must do things properly and set the right example in the coming days of our training and to make this happen, we have the ultimate team to guide us. Every day is different and we are ready to face the challenges and waiting for our personal weapon to be issued next. 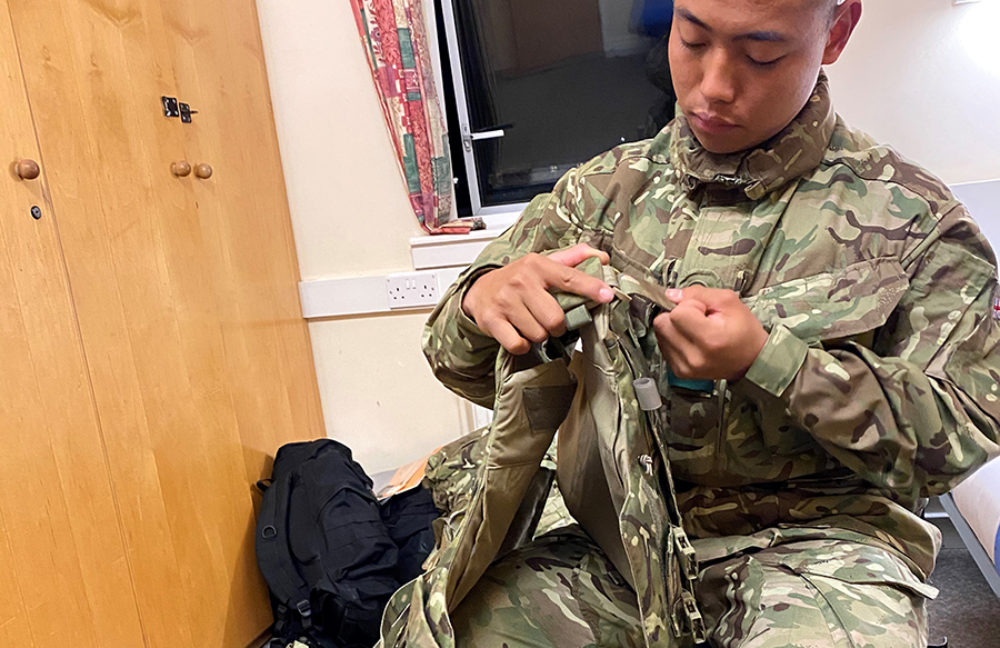 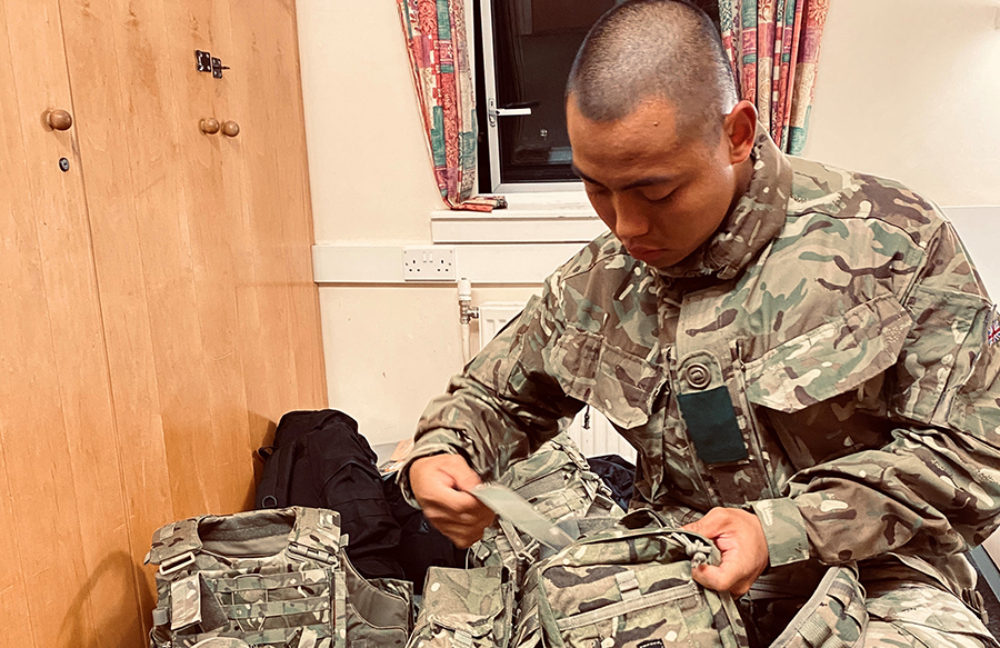 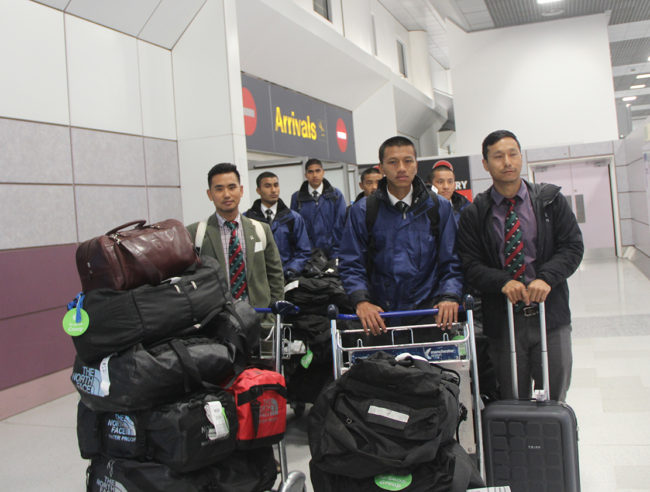 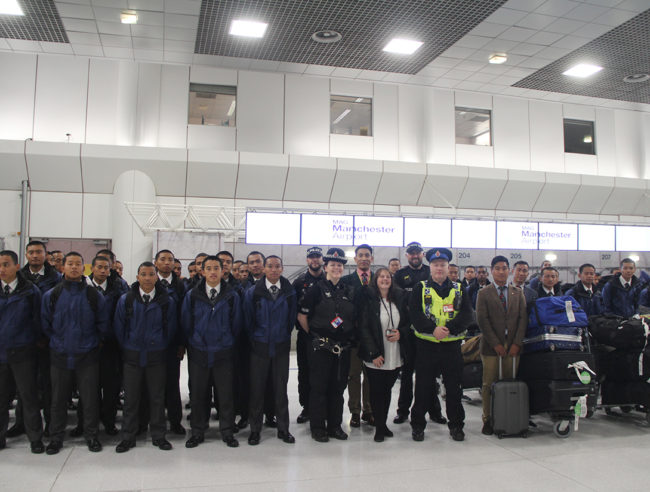 Recruit Intake 20 arriving in the UK

In the cold winter morning chill of 31st January 2020, the very next phase of my life started as a Trainee Rifleman of the British Army. After being selected for one of the most renowned military organisations in the world, I was in a big dilemma and it was hard for me to accept the fact that I have achieved my dream. I haves always adhered to a saying “hard work pays off’’ and it did for me. In a matter of minutes my life changed, I felt the sparkle like in a bottle of champagne.

A couple of things that I have already learned after being a Trainee/ Rifleman were patience and discipline. Days went by, filled with lessons that was going to be valuable in my career path and was going to be held at Catterick for nine months.

I remember the last time with my family in Kathmandu which was only for a few hours, but that felt like the shortest period of my entire life. The air was filled with a mixture of emotions, happy and sad at the same time. It was my first time leaving my family and the transition from a young boy was about to start on the path to becoming a professional Infantry soldier. None the less, that was the best farewell I have ever had.

After the final farewell on the 21st of February 2020, we left the British Camp in Kathmandu at 1700 hrs and checked in at the Tribhuwan International airport. It was my first time out of Nepal and to travel to one of the finest countries in the world, the United Kingdom. A country with a living monarchy, in the western part of Europe. Excitement was felt with every step, but I could feel in the corner of my heart, memories of my parents back in Nepal. The plane took off at 2035hrs from Kathmandu, Nepal and the transit were in Doha. The next flight was 12 hours from Doha to the UK. I was trying to stay awake, but I fell asleep as the travel was long. I remember waking up in the middle of the flight to have my meal and I fell asleep again. Then I felt the turbulence, but soon after looking out of the window, I realised that the plane had landed. We were guided off the plane by the courteous air hostess.

The very first impression that hit me was the climate, I could feel the strong wind brushing on my exposed skin. The people looked different and we could feel that we were the centre of attraction. Even though, eyes were on us, it was a very welcoming gesture. Some even complimented us on our behaviour. After the long-awaited moment, we finally arrived in Catterick Garrison.

We got off the coach, thinking that we were going to be thrown into a harsh training environment, but I was wrong. Our Officer in Command, 2nd in Command all the wing commanders and the platoon commanders were lined up waiting for us. The surprising part was, there were some families of the officers and Gurujis and the Pandit was also there to give us a blissful welcome. Our soon to be section commanders was also giving us a firm handshake and we are trying to figure out which section commanders were going to be ours. 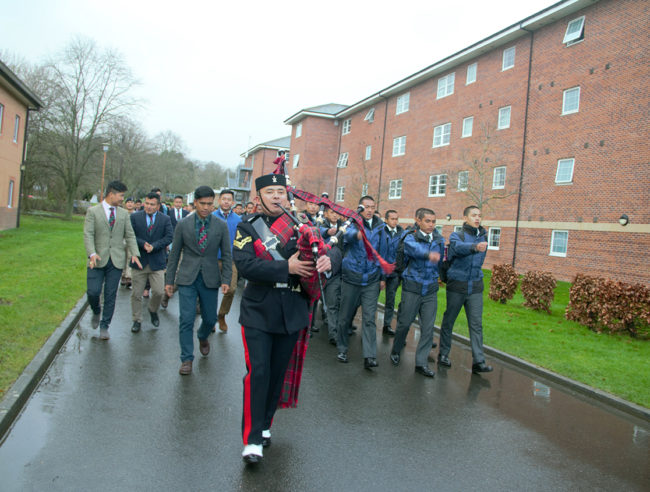 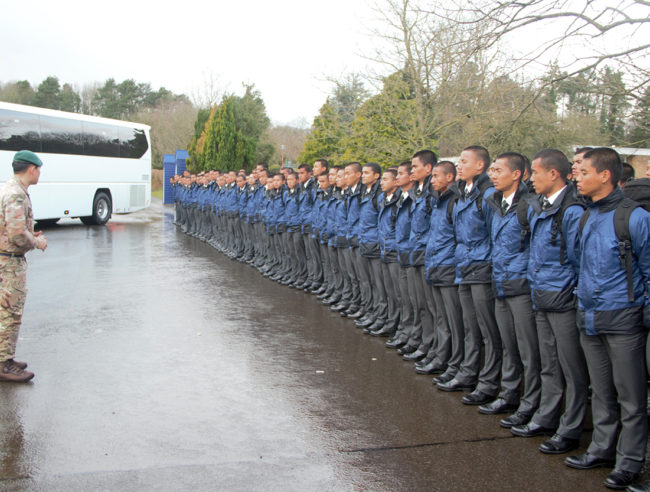 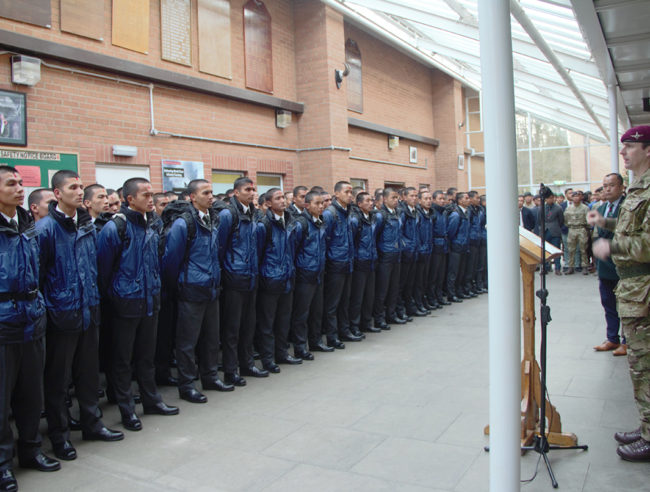 Kathmandu to Manchester
By Trainee Rifleman Sandeep Kunwar
Becoming a Gurkha was my dream, but what happened after that was completely new. Having been selected for the British Army (Brigade of Gurkhas), I was happy and relieved at all the hard work had finally paid off. I was excited about what the next part of my story will be however, at the same time, I had the fear of the unknown.

We were divided into nine different platoons and each platoon had four sections, so I was now in a platoon with 47 complete strangers and they were all my numberi. But It didn’t take long for me to befriend them as the drills went on. On 18th February 2020, we took an oath to the Queen and officially joined the British Army.

It was time for us to leave British Gurkha Porkhara (BGP) and start our journey to Kathmandu and further in the UK. We had spent about a month in Pokhara, so I was sad, but happy at the same time because joining the Gurkhas and going to the UK was my goal. We only spent a day in Kathmandu, and it was also the last day we saw our parents before the travel and nine months of Infantry Training in Catterick. I tried to control my tears but leaving my mother and trying to convince her was tougher than I thought.

Then came the longest flight of my life, 12 hours plus transit time in Doha. I was dying from excitement, but the time was not on my side. Finally, I woke up to see that we had landed at Manchester Airport. We were briefed about the process and escorted towards the immigration by Sahebharu. The weather was clear, the sun was up, but it was cold! I had never faced such cold in my life. I looked around and I could Cleary say that my numberis were all feeling the same. We all needed to adapt to it.

We all boarded the coach and began our journey to the Infantry Training Centre, Catterick our home for the next nine months. 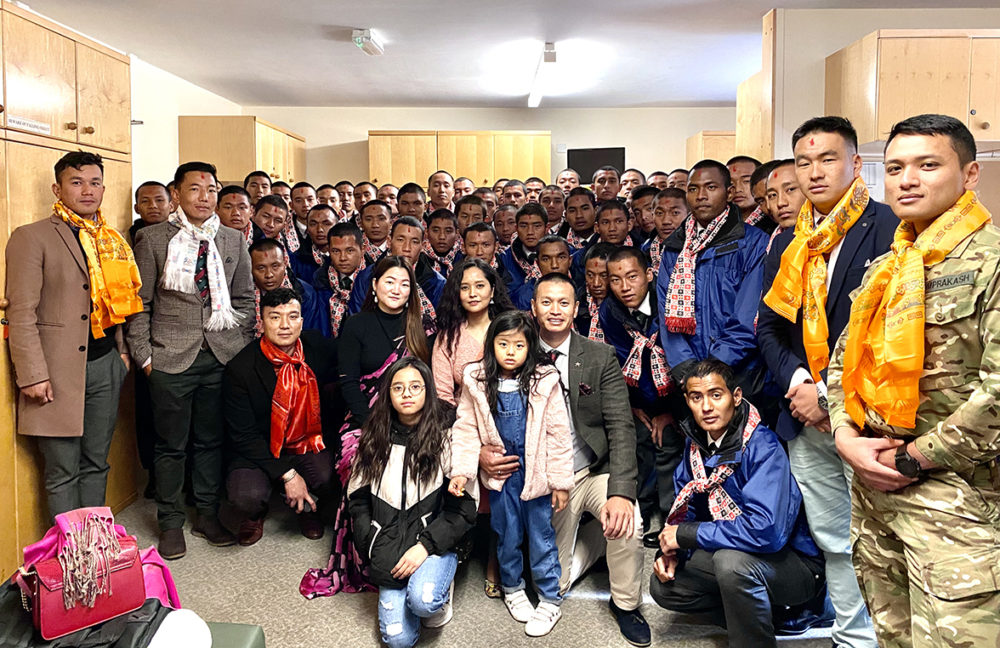 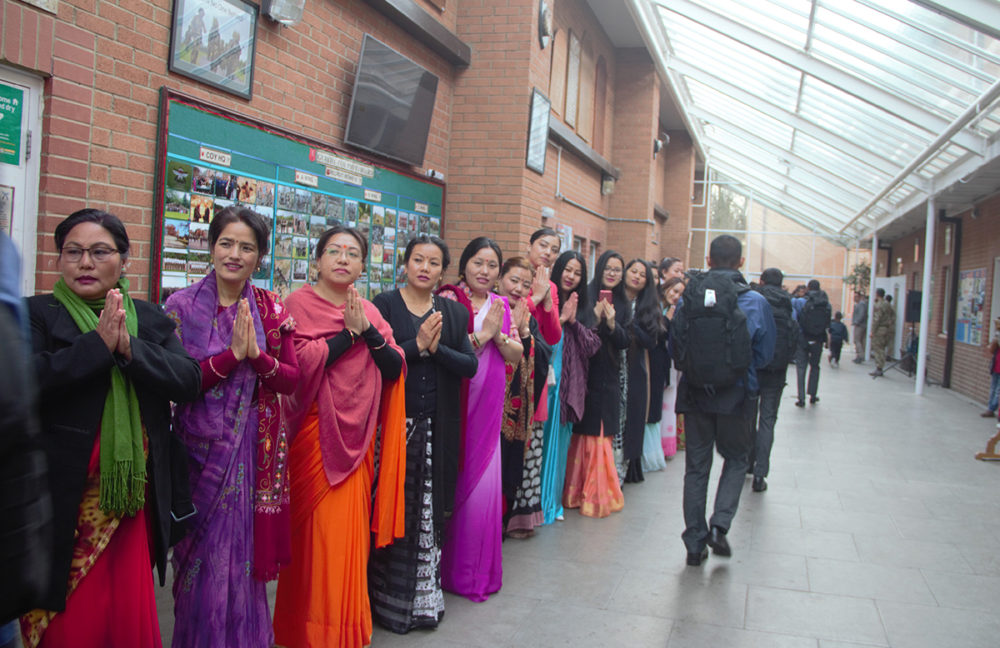 I landed in the UK for the very first time on 21st February 2020, the weather was pleasant. It was my first international flight. I was excited about military life, the first place I saw in the United Kingdom was Manchester. It was a bizarre feeling of achievement that the hard work had paid off as I took my first steps out of the aeroplane. We took our first picture of us in the UK, the police in Britain and the gurujis who were there when we went to collect our luggage.

Then several coaches waited for us outside the airport to take us to Catterick to train us for the next nine months.

The opportunity to be taught by the most talented, brave Guruji, was beyond my imagination. With my other 431 fellow Gurkha trainees, I think myself a lucky person. We finally got to Gurkha Company Catterick after about two and a half hours. I had a chance to see a beautiful place, river, roads, and so much more. I was surprised first and foremost by Catterick’s weather, it was too cold. It seemed like the wind was moored with fury. My mates and I chuckled. Nevertheless, our revered sahib, Guruji, and Pandit were at the gate and greeted us with a warm welcome.

We had dinner in Catterick for the first time a delicious meal. The first day was too cold and then I realized that training would not be easy. Senior Guruji’s and their families welcomed us warmly. We spent a great day with them by enjoying their delicious meals and gossips. The next day, after breakfast, we got some equipment that we would need every day. For the next nine months, we were all excited. The third day it was freezing outside, and everything was covered with snow. We stayed in and learnt about the importance of hygiene and tidiness in the military. The fourth day though was sunny and pleasant. We went for a dental check-up and completed some other admin to complete as well.

We have now started our training and are mentally prepared for the upcoming days ahead.

Gurkha Intake 20 arrives in the UK 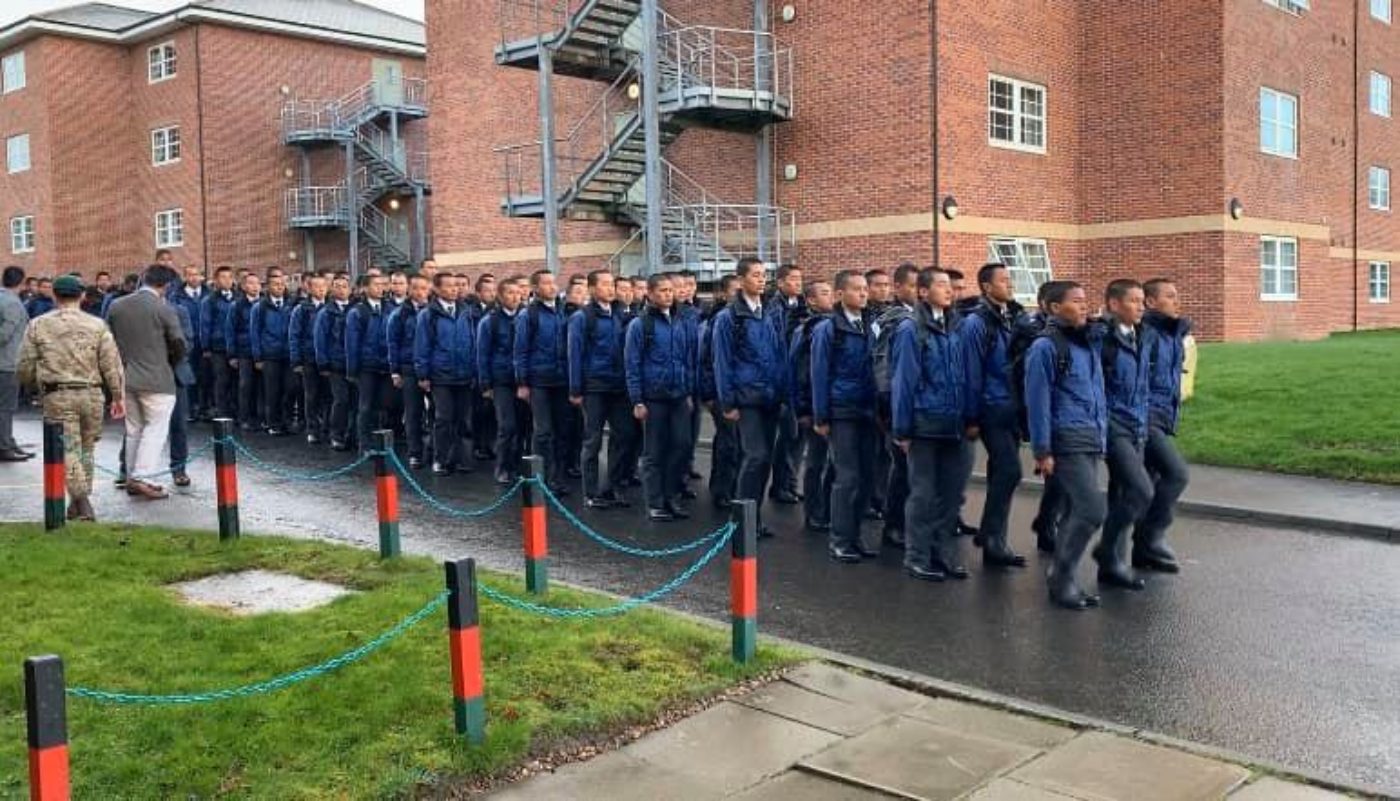 Gurkha Intake 20 started to arrive in the UK in the early hours of the 21st February landing at Manchester Airport before the drive to their new home for the next 39 weeks with Gurkha Company Catterick at the Infantry Training School.

We will continue to follow them and tell you their story and track their journey to trained soldiers in the British Army. 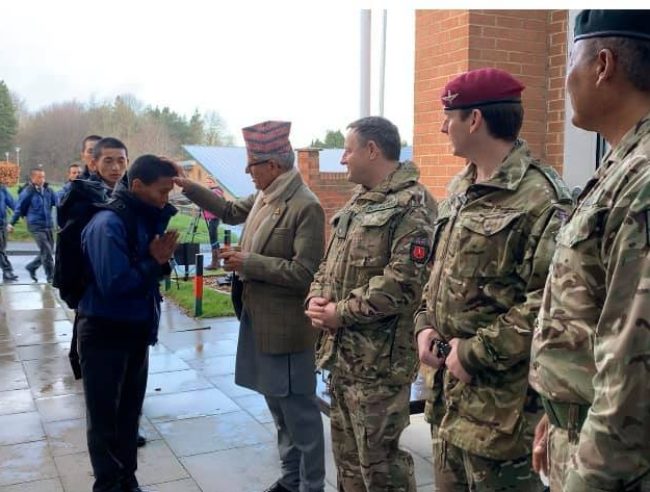 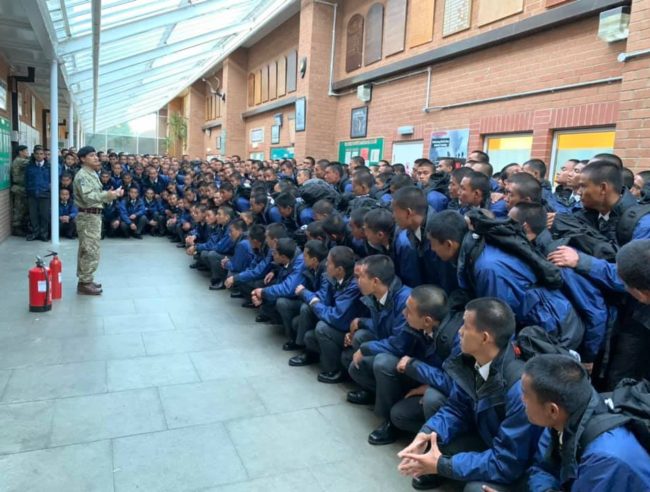 Our nelwly selected Gurkhas, all 432 of them, have just taken the Oath of Alegience to Her Majesty The Queen at an Attestation Parade in Pokhara, Nepal.

This was in front of over 1700 family members and guests with the Inspecting Officer being the Head of the British Army, Chief of the General Staff, General Sir Mark Carleton-Smith KCB CBE ADC Gen. 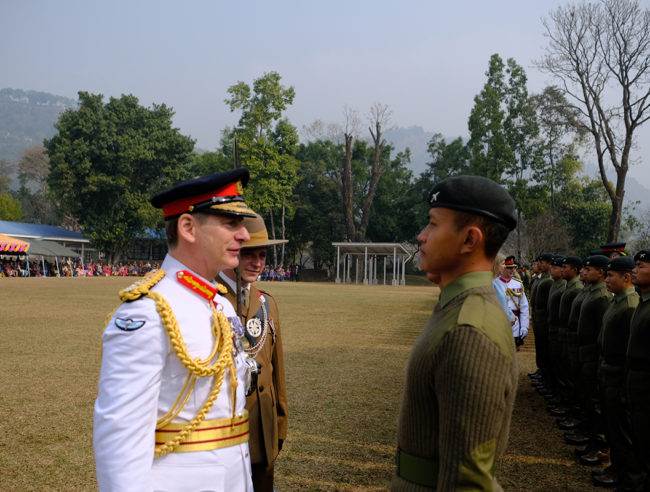 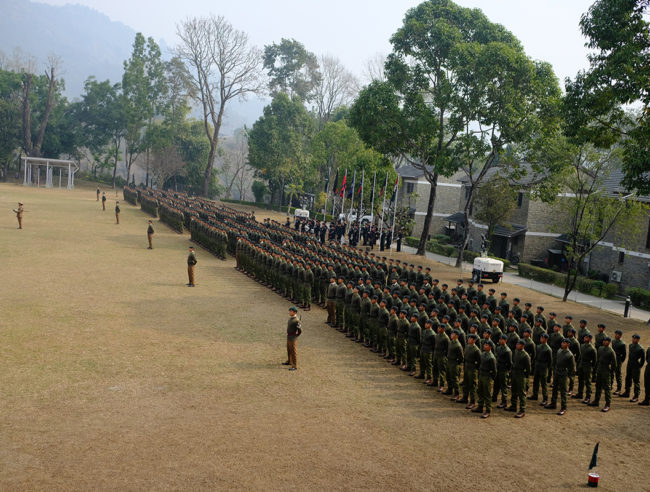 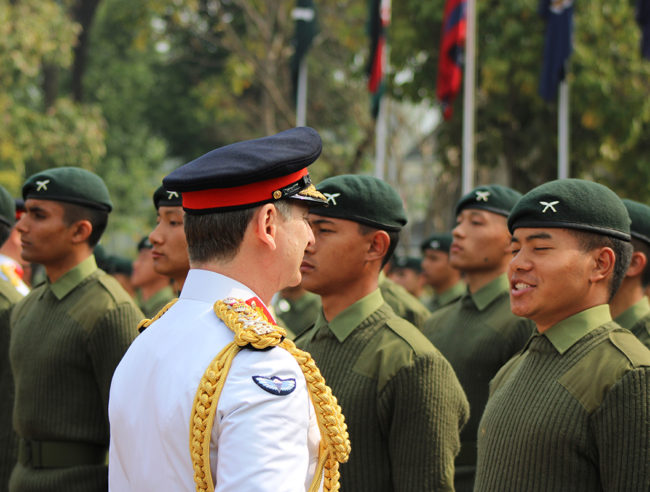 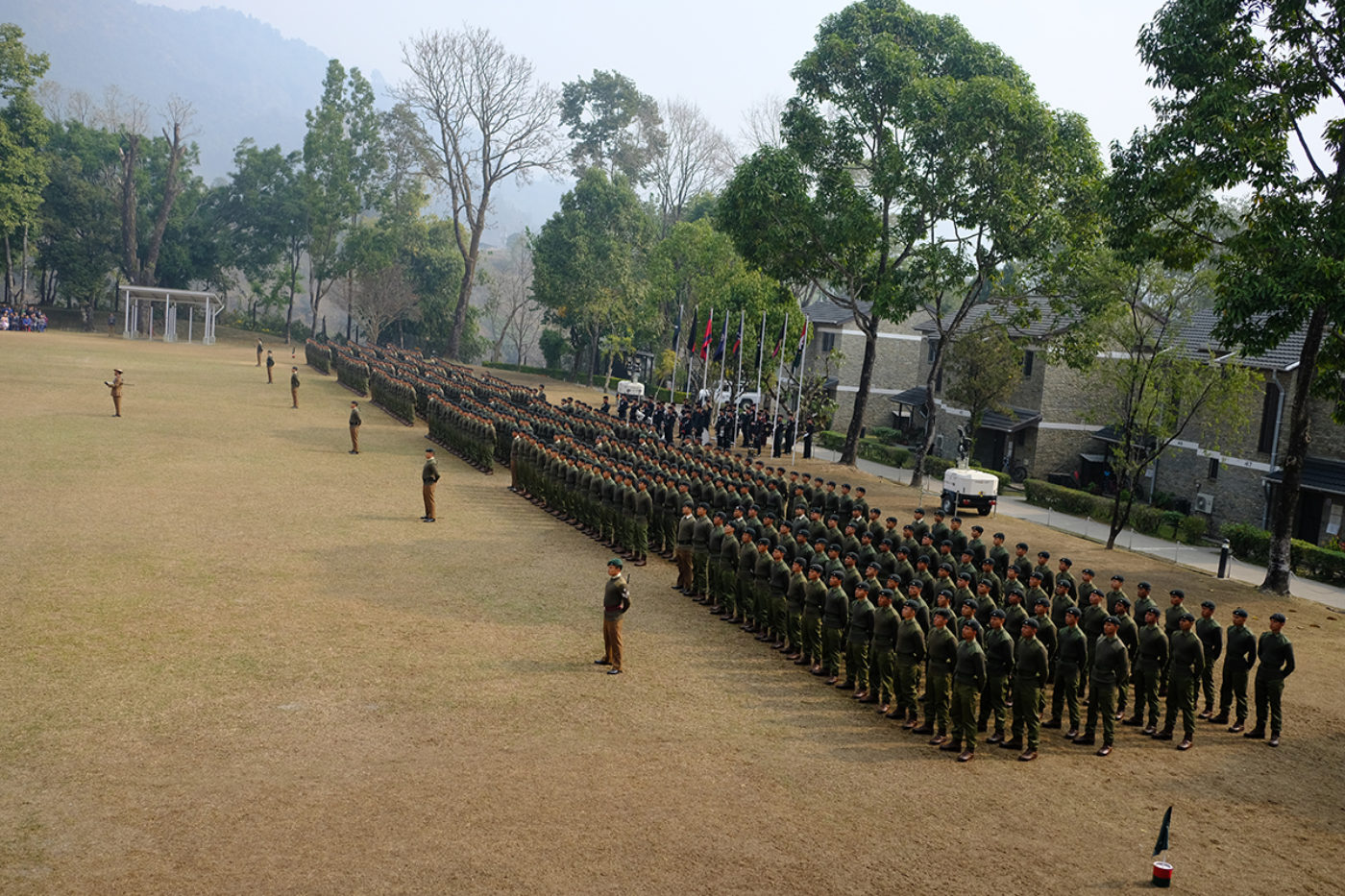 Meeting with Families after the Attestation parade

After the Attestation parade it was time to meet up with family and friends over lunch in the grounds of the barracks in Pokhara.

The Chief of the General Staff, took time to walk around to talk to the new Gurkhas and thank their families for allowing their young men to join the British Army. He stated Gurkhas had value, can have great careers in the Army and the Army will look after them. 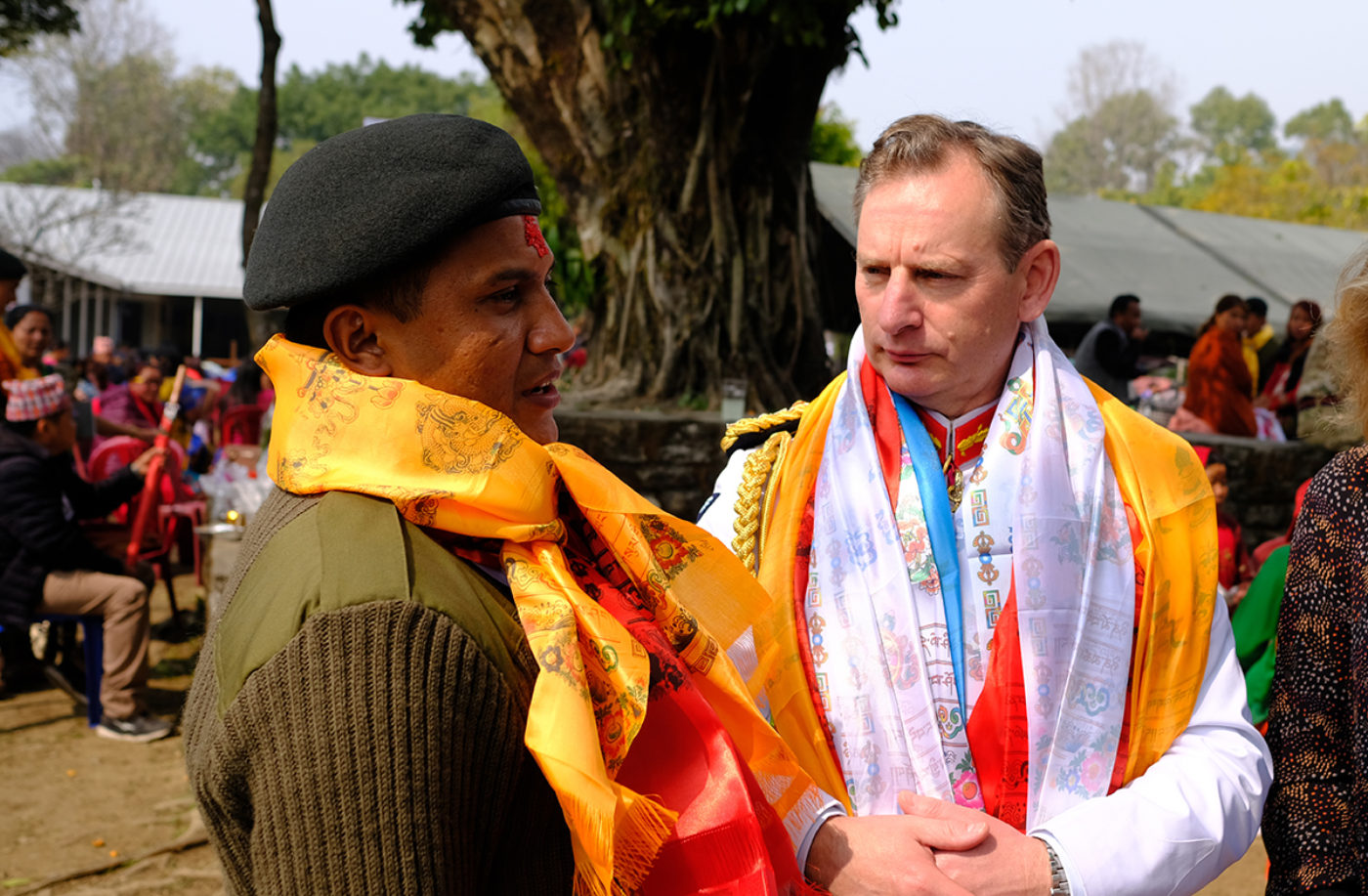