Gurkhas have had tremendous success at the Combat Rifle Championship in Bisley this week with a Queen’s medal win and an Inter-Unit team trophy being the crowning achievements of a spectacular performance.

Furthermore, Gurkhas (or transferred ex-Gurkhas) took all but two of the top 20 places in the competition and 56 of the top Army 100.

2 RGR ‘A’ were top spot in the teams competition, winning the Inter Unit Operational Shooting Championship. Furthermore they were closely followed by other Gurkha based teams: 1 RGR ‘A’, 30 Signal Regiment, 2 Signal Regiment and 10 QOGLR. A total of 11 of the top 20 teams were comprised of Gurkha or Gurkha affiliated units.

“These outstanding results demonstrate the professionalism and dedication that Gurkhas apply to all aspects of their Army lives,” said Colonel BG, James Robinson. “Shooting is a core part of what we do as top quality soldiers, and we take immense pride in being some of the best shots in the British Army.”

The Queen’s MEdal for shooting, awarded to the best shooter for each service 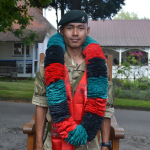 Sgt Sanjib Rai, 2RGR, was the best shot for the Army. 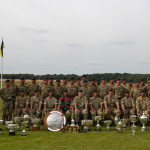