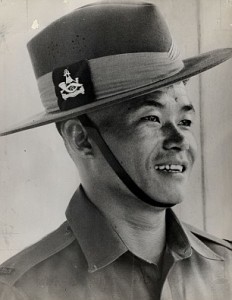 Captain Rambahadur Limbu VC MVO, joined part of a special service with HRH The Prince of Wales in London together with 31 other surviving Victoria Cross and George Cross recipients.

Rambahadur Saheb was a Lance Corporal in the 2nd Battalion, 10th Princess Mary’s Own Gurkha Rifles, during the Borneo Confrontation. On 21 November 1965, the then Lance Corporal Rambahadur Limbu was in an advance party of 16 Gurkhas when they encountered about 30 Indonesians holding a position on the top of a hill. Ram went forward with two men, but when they were only 10 yards from the enemy machine-gun position, the sentry opened fire on them. Ram rushed forward and killed him with a grenade. The remaining enemy (“dushmen”) then opened fire, wounding the two men who were with Ram. Ram, under heavy fire, made three journeys into the open, two to drag his comrades to safety and one more to retrieve their Bren gun. He then attacked the enemy with the Bren gun, killing several.

Here is an extract from the citation:

“Rushing forward he hurled himself on the ground beside one of the wounded and calling for support from two light machine guns… he picked up the man and carried him to safety… Without hesitation he immediately returned… [for the other] wounded man [and] carried him back… through the hail of enemy bullets. It had taken twenty minutes to complete this gallant action and the events leading up to it. For all but a few seconds this Non-Commissioned Officer had been moving alone in full view of the enemy and under the continuous aimed fire of their automatic weapons… His outstanding personal bravery, selfless conduct, complete contempt of the enemy and determination to save the lives of the men of his fire group set an incomparable example and inspired all who saw him.
Finally, Lance Corporal Rambahadur was responsible for killing four more enemy as they attempted to escape…” 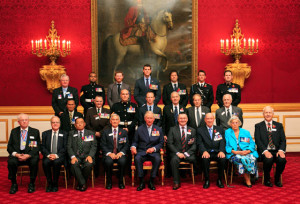 Some coverage of the event and a glimpse of Rambahdur VC MVO Saheb can be seen here: http://forces.tv/76571089