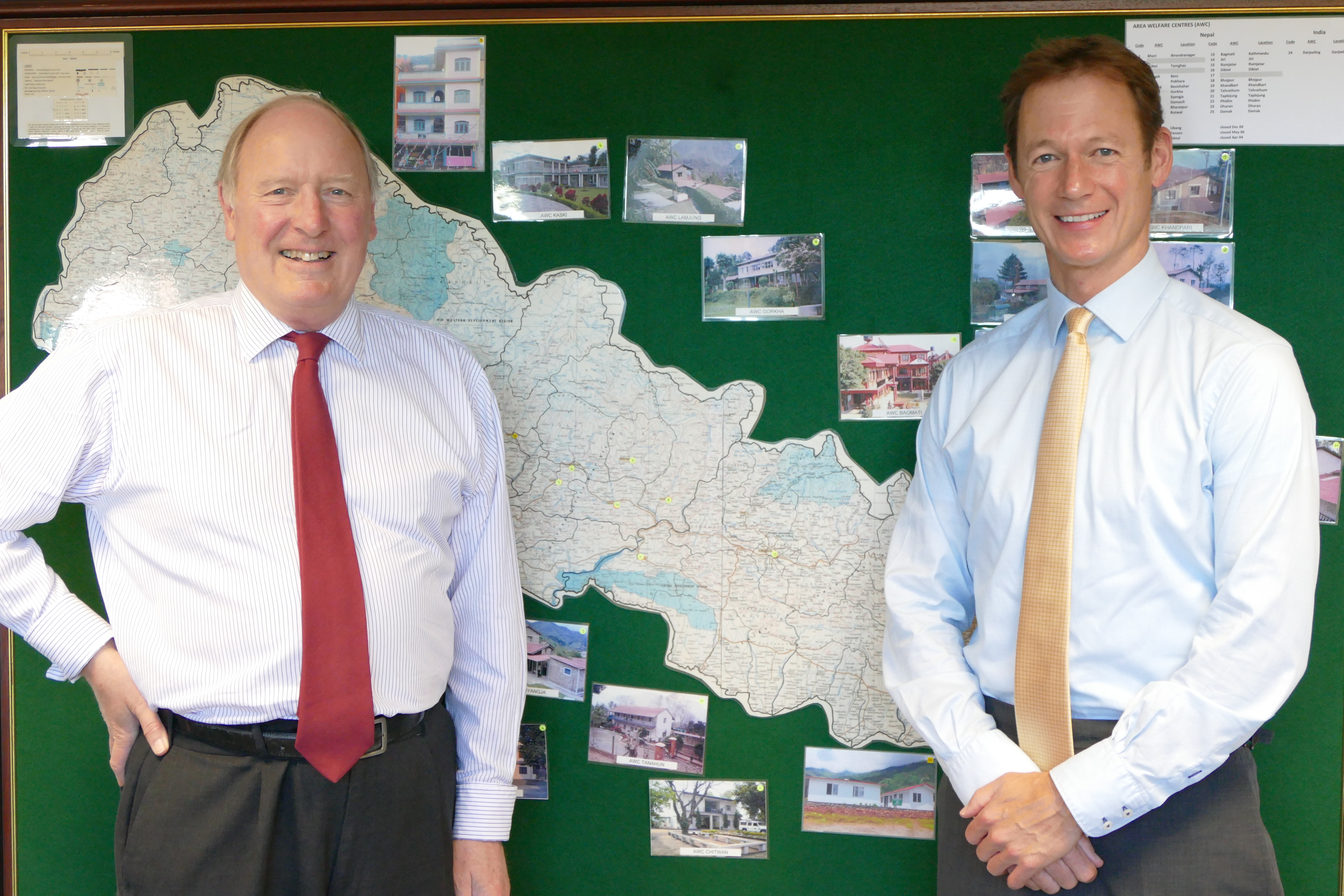 The Gurkha Welfare Trust (GWT) sees a change of leadership

In May 2016, Colonel (Retd) William Shuttlewood OBE passed the torch to The Gurkha Welfare Trust’s new Director, Al Howard, as he headed off into retirement.

The Gurkha Welfare Trust caught up with them both during their handover to discuss their work to date, plans for the future, and any challenges that may lie ahead. The following is largely extracted from the GWT website.

Time at the Trust

The Trust’s work clearly means a great deal to Colonel William, who has spent over a decade at its helm. He discussed his abiding impression of his time there:

“I don’t have a favourite memory of my time at The Gurkha Welfare Trust. I think it would be invidious to try and define one if truth be known, because it’s been eleven years of the most remarkable experiences of my life.

“I’ve been extremely fortunate to have been doing this at a time of change, at a time when the Trust is able to make a real difference in the foothills of the Himalayas.”

Al is more than ready for the challenge. Having spent the last five years in Nepal working with one of GWT’s implementing partners – the Kadoorie Agricultural Aid Association (KAAA) – he’s enthusiastic about maintaining his links with Nepal. 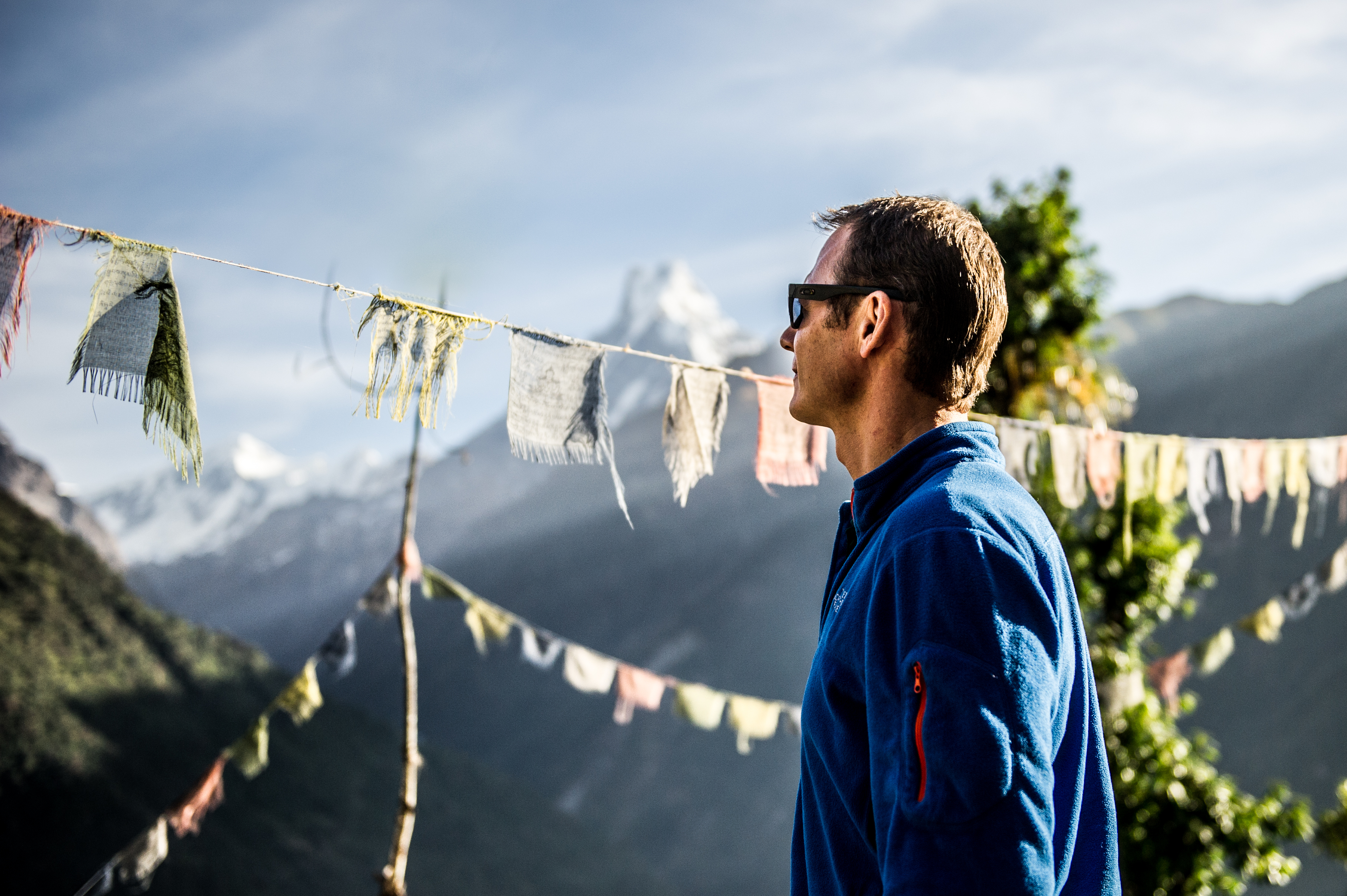 Al Howard in former role as Director of KAAA in Nepal

“I hope it will give me the opportunity to use the expertise I’ve garnered. I understand what is required and expected of the Trust in Nepal and I think my time there has given me a valuable insight into the implementation of work in the region.”

“The earthquake was a national crisis and when you have a single crisis like that you can focus on it, marshal the resources required and deal with it – and that is what we are doing at the moment. It will be a long term programme (3-5 years), costing a huge amount of money (£17.5 million).”

Al was in Nepal when the first quake struck in April last year and witnessed first-hand the work the Trust’s field team was doing right from the offset.

“The key difference between the Trust and many others involved [in the earthquake response] is that the Trust was always there. It has a footprint through its Welfare Centres and it is not going anywhere.

“As a result, we have extensive local knowledge and our beneficiaries know and trust us.”

Colonel William and Al share similar ideas regarding the challenges ahead. As time has passed, Gurkha veterans and their widows have grown older. As a result, the Trust has had to adapt, becoming more responsive and mobile – bringing individual aid to people’s homes.

On top of that, the Trust has expanded its community work across rural Nepal – notably building schools and water projects. Colonel William explains why community aid forms an important part of their work:

“When I was part of the Brigade of Gurkhas our ethos was always to look after our own. And our own includes the country of Nepal, because that is the homeland of these remarkable soldiers.

“During my recent visits to Nepal I have come across a number of Queen’s Gurkha Engineers on Op MARMAT (serving Gurkha soldiers who are supporting the Trust’s earthquake response). Without exception, they have all been thrilled to have been deployed to help their countrymen in a time of crisis and this reflects our community aid ethos.”

Colonel William Shuttlewood OBE joined the Trust in 2005 after a distinguished career in the Brigade of Gurkhas where he was awarded both an MBE and OBE. Colonel Wiliam led the GWT against the backdrop of The Maoist Insurgency in Nepal and in 2009 he established our Welfare Advice Centres in response to Gurkhas obtaining the right to settle in the UK.

Colonel of the Brigade of Gurkhas, Colonel James Robinson said, “The serving Brigade of Gurkhas is incredibly indebted to Colonel William who has led and developed the Gurkha Welfare Trust for over a decade and in doing so he has also done much to enhance the Gurkha name. He leaves an incredible legacy at the heart of which was last year’s G200 Pageant and the reponse to the 2015 Earthquakes that struck Nepal“.

The Brigade of Gurkhas wishes Colonel William the very best for the future and warmly welcomes Al Howard in his new role as Director of The Gurkha Welfare Trust.

FOLLOW US
The Kasam Khane Parade for those Gurkhas joining T

Photograph taken in Brunei, home currently to The