The Gurkha mission to help Nepal’s recovery from last year’s devastating earthquakes ended today as the final soldier pulled out from a remote construction site deep in the Himalayan foothills.

About 90 troops including 50 specialists from the Queen’s Gurkha Engineers (QGE) were deployed to Nepal in September as part of Operation MARMAT 4 – meaning ‘rebuild’ in Nepali. The team has built a quake-resistant school and a number of homes for Gurkha veterans in Lamjung district, near the epicentre of the 7.8 magnitude quake in April 2015. 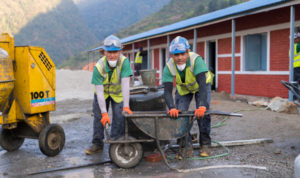 Gurkhas working on the rebuild

This is the final chapter in the British Army’s efforts to assist the Nepali Government’s disaster response. By working with its partner charity, The Gurkha Welfare Trust (GWT), the UK Brigade of Gurkhas has provided aid to thousands of Nepali citizens over the last 18 months.